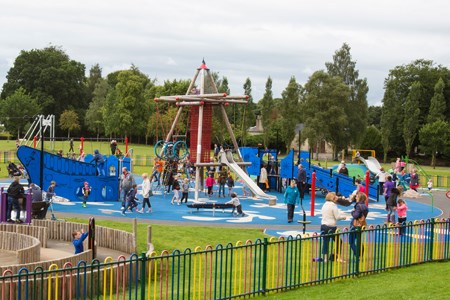 Parks and Green Spaces Minister, Marcus Jones MP, Parliamentary Under-Secretary of State, Minister for Local Government has announced the creation of a 'Parks Action Group' as part of his formal response to the Communities and Local Government Select Committee Inquiry into the Future of Public Parks. This advisory panel, chaired by the Minister, will include Fields in Trust Chief Executive, Helen Griffiths as a member alongside representatives from other green space organisations who are tasked with applying their expertise to inform a new cross-departmental group of government departments.

New research from Fields in Trust demonstrates a direct and statistically significant link between publicly accessible parks and green spaces and health and well being. Based on new analysis of existing data from Defra and Natural England and a new primary data (sample size 4,033) Fields in Trust have established, for the first time at the national level, a link between an individual's use of parks and green spaces and an improvement in health and wellbeing (covering General Health and the four ONS wellbeing questions - life satisfaction, sense of worth, happiness and anxiety).

On average, the more frequently park or green space trips are made, the higher an individual's wellbeing. The most practical and effective use of an individual's time would be to visit their local park or green space at least once a week to gain most of the health and wellbeing benefits. This results in a recommended 'dosage' for parks and green space: if it is 'five a day' for fruit and veg then it is 'once a week' for parks.

The new research also identifies the importance of parks and green spaces as venues for community connections, helping to reduce the risk of loneliness. Research highlights links between park usage and demographics; parks and green spaces are particularly important to families who are twice as likely (33%) to be users of parks than non-users (18%).

Chief Executive, Helen Griffiths said: "I welcome the Ministers response to the CLG Parliamentary Committee and Fields in Trust's appointment to the newly established 'Parks Action Group' at this pivotal moment for the future of parks and green spaces. Our ongoing research recognises how these spaces help to address significant public policy issues including health and wellbeing and community integration. We are looking forward to furthering our work with colleagues across the sector to ensure that we value parks and green spaces and take account of the vital contribution they make to local communities."

The members of the Parks Action Group are:

The Minister's announcement came in the week that Fields in Trust launched UK's Best Park 2017. At a time when the UK's parks are seeing a dramatic reduction in funding for upkeep and maintenance and childhood obesity is identified as a growing concern, the UK's Best Park award highlights the vital role of local parks and green spaces – for play, relaxation or sport – and help ensure they are protected from closure or building development.

UK's Best Park is a unique award open to all local green spaces across the UK. A simple online nomination form allowed anyone to suggest their favourite green space from 9am on Thursday 21st September. This was followed by a public vote with the winner due to be announced at the Fields in Trust Awards ceremony on 29th November.

The detailed findings of the new Fields in Trust research will be published in a full academic paper which will identify not only details of park and green space usage but will also reveal the results of a new bespoke survey identifying the value placed on parks and green spaces by those who use them.

Fields in Trust currently safeguards over 2,600 sites, a total of 30,000 acres of land (12,140ha.) including playgrounds, playing fields, and formal and informal parkland across the UK. Recreational spaces in residential areas remain a priority for protection at a time when there is pressure on land for new housing development. Parks and playing fields safeguarded with a Fields in Trust Deed of Dedication ensure that the land will be protected for community use, in perpetuity. Fields in Trust work to ensure that all communities, and particularly young people, should be able to enjoy healthy, active, outdoor recreation within walking distance of home.

ABOUT FIELDS IN TRUST

Fields in Trust is a national charity that operates throughout the UK to safeguard recreational spaces and campaign for better statutory protection for all kinds of outdoor sites.

Founded in 1925 as the National Playing Fields Association by King George V, their mission is the same now as it was then: to ensure that everyone – young or old, able-bodied or disabled and wherever they live – should have access to free, local outdoor space for sport, play and recreation. These spaces are vital to building happy and healthy communities and sadly continue to be threatened by all kinds of development.

Nominations for UK's Best Park, as voted by YOU! 2017 will open at 9am on Thursday 21st September. Nominators submit a short 50-word description explaining why the space should be considered as UK's best. Nominations close at 5pm on Friday 13th October. Voting opens for those parks nominated at 9am on Saturday 14th October.

The park with the most votes in each of England, Wales, Scotland and Northern Ireland will be shortlisted. Their nominators will be invited to attend the prestigious Fields in Trust Awards where the UK's Best Park, as voted by YOU! 2017 will be named.