HERITAGE OF PARKS: A legacy of remembrance 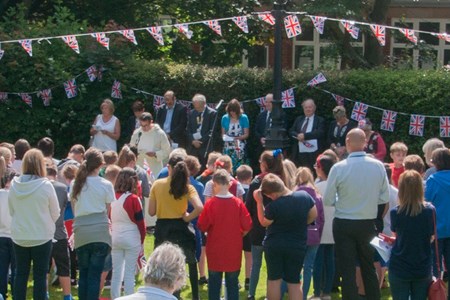 Friday 19th July marks 100 years since Peace Day, the day that the post-World War I peace was celebrated in Britain following the signing of the Treaty of Versailles, including a large-scale Victory Parade in London involving nearly 15,000 British Empire service people.

In the years which followed the cessation of conflict, countless playing fields and recreational spaces were established across the country as memorials to the fallen, such as Polegate War Memorial Recreation Ground in East Sussex, and by returning soldiers seeking places both to relax and to continue the camaraderie of the trenches, like Brindle Community Hall Open Space in Lancashire. Many of these are now protected as part of our Centenary Fields programme and this Friday spaces across the county will be marking 100 years since the peace with special events.

Centenary Fields was launched at War Memorial Park in Coventry in July 2014 by our President, HRH The Duke of Cambridge, who unveiled the dedicatory plaque and laid a wreath at the memorial. To mark the mid-point of the programme in 2014 His Royal Highness visited Kensington Memorial Park in west London, marking Remembrance Day by unveiling the space's dedicatory plaque. Last year we marked the centenary of the Hundred Days Offensive which ended the war with our Centenary Fields Legacy campaign, which told the story of one space each day protected under the programme.

The Centenary Fields programme, delivered in partnership with The Royal British Legion, has now closed for applications and a total of 181 spaces, covering nearly 500 hectares of land, have already been protected in perpetuity. These figures will rise further as remaining applications finalise the protection process and once completed the programme will have secured a nation-wide legacy, honouring the memory of the millions who lost their lives in World War I.

In addition to the 77 local authorities and 57 town, parish and community councils protecting spaces under the programme to date, spaces owned by charities, county councils, sports clubs, individual landowners and religious organisations have also been protected.

You can explore a map of all 181 Centenary Fields protected to date below:

Last year's Centenary Fields Legacy campaign explored the stories behind many of these protected spaces. Some of the spaces featured served the war effort itself, more told the stories of individual combatants whilst others had contemporary links to the conflict. Yet more contain memorials to the fallen and a very good number of these were themselves established as public parks in the 1920s.

This decade saw local committees formed across the country to discuss ways of establishing memorials to the fallen. Public subscription in many places provided for the cenotaphs and physical memorials which remain to this day, and in many cases these monies were also used to purchase land to create memorial spaces. The examples and stories are too numerous to mention in the detail they warrant but many can be explored in the interactive Centenary Fields Legacy map.

This week our Summer of Parks 'One Small Thing' is asking you to see if you can find out something about the history of your local park. As the stories of countless Centenary Fields show, this can often lead to you discovering so much more than just the history of the park itself!

Picture top, with thanks to Burbage Parish Council, shows a Peace Service taking place in Pughe's Paddock in Burbage, Leicestershire last month to mark 100 years since the signing of the Treaty of Versailles.