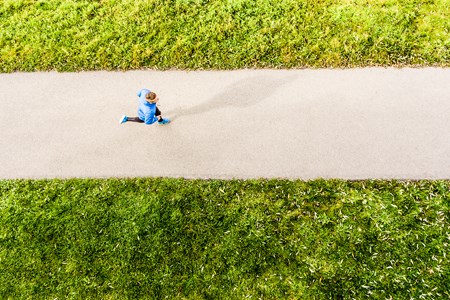 This has been a busy year for Fields in Trust and the parks and green spaces sector as a whole. Here we take a look back on some of the highlights and events of note from 2018.

It has been a year dominated by developments in policy related to parks and green spaces and January brought the appointment of a new Minister for Parks and Green Spaces at the Ministry for Housing, Communities and Local Government (MHCLG). Richmond MP Rishi Sunak was appointed as part of the Government reshuffle, replacing Marcus Jones MP. Elsewhere in Whitehall, DEFRA launched their 25-year environment plan which included proposals to improve air and water quality, enhance wildlife habitats and use green spaces to improve public health and wellbeing.

Local government took centre stage in February with the release of the annual review of local council finance. The report came just days after Northamptonshire County Council "raised a red flag" over their finances and demonstrated the troubling situation could affect as many as one in ten councils. Whilst most people assume parks and green spaces are a statutory service, their funding is not protected and so in times of budget cuts there are no guarantees they will continue to be supported by cash-strapped local authorities. Our Chief Executive, Helen Griffiths, responded to the report.

The findings were reinforced in March with the release of APSE's State of the Market survey, detailing trends in the management and maintenance of the UK's parks and green spaces. Of the parks professionals who responded 95% either "agree" or "agree strongly" that the "lack of investment in parks and green spaces will have health and social impacts". Responding to the report's findings Helen Griffiths noted the importance of this data to inform long-term strategic decisions of local, national and UK-wide government action and recognise the health and wellbeing value of green space. We also contributed to MHCLG's Integrated Communities Green Paper making the case that parks and open spaces offer valuable shared spaces for community connections. We are looking forward to continuing work with the Ministry and sectoral colleagues on the Parks Action Group in 2019.

As the weather turned milder in April our team of runners took part in the London Marathon, raising money to support our work. Lee from our partner organisation Our Parks ran with one of their participants, Susan, who had started running less than a year before the marathon.

May brought the culmination of many months of work as we launched our new Revaluing Parks and Green Spaces research and Green Spaces for Good strategy. The research was the first time wellbeing benefits associated with parks and green spaces had been calculated so comprehensively, specifically using HM Treasury approved welfare weighting methodology. It found that parks and green spaces across the United Kingdom provide people with over £34 billion of health and wellbeing benefits every year, as well as demonstrating National Health Service savings of at least £111 million per year. This figure is based solely on prevented GP visits and doesn't include savings from non-referrals for treatment or prescriptions. Later in the month the research was shared at an event in the Welsh Assembly and we gave evidence at the Local Government and Communities Committee session on access to green space at the Scottish Parliament.

Alongside the research we launched our new Green Spaces for Good strategy and refreshed corporate identity. Green Spaces for Good sets out our strategic focus on championing and supporting our parks and green spaces by protecting them for people to enjoy in perpetuity. The following month Helen Griffiths reflected on the reasons why we updated our identity.

As spring turned to summer June brought a flurry of activity with our Annual General Meeting at our London head office. A new partnership with walking app Go Jauntly saw them curate a collection of ten walks which pass through protected spaces.

Back in Westminster the Government launched their new Childhood Obesity Plan, which referenced "limited access to green spaces" as a contributory cause and encouraged local authorities to "...ensure access to quality green space to promote physical activity". This plan is due to be reviewed further in the spring and we look forward to contributing to the continuing discussions in this area. Fields in Trust also joined a coalition of organisations from across the parks and green spaces sectors as founder signatories of the Charter for Parks which calls on the UK's political leadership to celebrate these spaces so vital for all communities and take action to safeguard them.

More locally the month brought success in Knowsley where the Council announced the dropping of their plans to sell off 17 of the borough's parks and green spaces.

As temperatures rose during the summer's heatwave, July was a month which celebrated our parks and green spaces. The first Saturday saw an estimated 30,000 park lovers enjoy over 100 Have a Field Day events across the UK, from small community picnics to large parties and fetes.

Later in the month it was announced that a record 1,883 parks and green spaces had been handed Green Flag Awards recognising their quality and standard. On the same day we celebrated the 80th anniversary of the legal protection of King George V Playing Field in Sonning, Berkshire which is identified as "the first field" protected through the King George's Fields Foundation.

Continuing the heritage theme, in August we launched our Centenary Fields Legacy campaign, 100 years on from the start of the Hundred Days Offensive which ended World War I. The campaign, in partnership with The Royal British Legion's 'Thank You' initiative, featured one space each day which is now protected in perpetuity in memory of those who served and scarified during the conflict. August saw the first of the campaign's theme weeks in which we spotlighted seven spaces with contemporary links to remembrance.

The month also brought an opportunity to look forwards with the launch of Future Proof Parks. This National Lottery-funded programme, partnering with Groundwork and the National Youth Agency, is supporting Friends of parks groups and local young people to work together in a series of innovative projects which will protect heritage parks and widen the understanding of their importance.

With September and the start of autumn our Centenary Fields Legacy campaign continued, including the second theme week which highlighted spaces with stories of individuals who fought in the conflict. At the mid-point of the campaign we looked back on the protection of Kensington Memorial Park in November 2016 when our President, HRH The Duke of Cambridge, unveiled the Centenary Fields plaque.

The month saw Fields in Trust Cymru celebrate 20 years of protecting parks and green spaces and we reflected on the story and achievements of our office in Wales in this interactive archive.

As well as looking back, in September we also looked forwards with the announcement of £100,000 of investment in four parks from our Active Spaces programme. The capital grants funded by the London Marathon Charitable Trust benefit a park in each of the home nations which will also be protected in perpetuity as part of the programme. We are looking forward to publishing an interactive map next year showcasing the successes of the Active Spaces programme.

The publication of Natural England's latest MENE report found more people than ever before are spending time in our natural environment, but threats to our parks and green spaces remain and in September the Mail on Sunday launched their "Save Our Parks" campaign, which referenced our Revaluing Parks and Green Spaces research.

Having been discussed in the Department for Culture, Media and Sport's Civil Society Strategy in August, in October the DCMS's new loneliness strategy, A Connected Society, became the latest Government publication to value the importance of parks and green spaces, referencing their value in tackling loneliness. The major event in Westminster this month, however, was the Budget and with the "end of austerity" having been announced our Policy Manager, Alison McCann wrote in advance of the Chancellor's statement. We made the case that if more money were to be made available for public services that it would be financially efficient to channel this investment into social infrastructure that supports the preventative health agenda and reduces the need for more expensive and intensive interventions further down the track. The Comprehensive Spending Review will be taking place next year and we look forward to responding when it is published.

Our Centenary Fields Legacy campaign continued and the third theme week focussed on spaces which served the war effort. The final theme week in November looked at spaces with memorials to the fallen and the campaign itself concluded on Armistice Day, featuring Victoria Embankment in Nottingham.

As the Mail on Sunday's campaign progressed, the API released the second phase of their Nowhere2Play research which showed a "continued and significant decline" in the number of play areas in the UK. Meanwhile, the Department for Health unveiled their new preventative health agenda. The importance of preventing problems from occurring rather than attempting to cope with the consequences is an approach we have been advocating for some time and Alison McCann wrote about how pleased we were to hear the government make a clear and bold statement about a preventative health approach. Looking ahead to a proposed Green Paper on preventative health in the spring we will continue to advocate for a government commitment to ensure quality parks and green spaces are protected to enable people to take personal responsibility for their own health.

Entering December as the year draws to a close, thoughts turn to 2019 and MHCLG have announced their £1 million Pocket Parks Plus fund which is providing grants of between £15,000 and £25,000 for the creation or renovation of pocket parks. In Wales the tenth edition of Planning Policy Wales was published by the Assembly Government and includes reference to Fields in Trust's Guidance for Outdoor Sport and Play.

We have also this month welcomed our first guest blog from Elaine Smith MBE, Chair of the Friends of Stanley Park, who has taken a look back on one year since Stanley Park in Blackpool was named UK's Best Park.

The UK's Best Park award will be returning next summer alongside Have a Field Day which will again take place on the first Saturday in July.

Thank you for your support of Fields in Trust over the last twelve months and into the new year as we continue our work to protect, support and champion Green Spaces for Good.

Champion: We champion the value of parks and green spaces