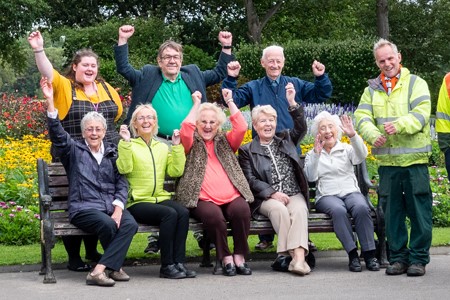 It has been another busy year for our nation's parks and green spaces and for Fields in Trust as we worked to protect, support and champion green spaces for good.

This year saw 101 new parks and green spaces, covering nearly 400 hectares, protected in perpetuity to ensure they will always be places for recreation and relaxation for the community. As part of this, we concluded our Centenary Fields programme, which worked in partnership with The Royal British Legion to protect spaces to honour the memory of those who fell during World War I. Our Active Spaces programme, funded by the London Marathon Charitable Trust, continued its efforts to protect parks and inspire the least active communities. In addition, 15 parks were protected as Green Spaces for Good, a number which will grow in 2020 as we continue to apply our evidence-led approach to securing spaces in perpetuity.

This summer saw park lovers celebrate their local green spaces in record number with tens of thousands engaging in both our UK's Best Park award and Have a Field Day. Our Summer of Parks stretched from mid-May right the way through to mid-September and provided weekly discussions on important topics affecting our parks and green spaces. We told stories of inspiring individuals, offered advice, looked into our archives and much more. Over 130,000 of you engaged specifically with the Summer of Parks content on our website, with hundreds of thousands more joining in on social media.

This year's UK's Best Park award was the biggest yet with a record 364 parks nominated. You then cast an amazing 36,832 votes in a celebration of all the nominated parks and the various reasons you love them. To recognise this, as well as crowning Stanley Park in Blackpool the overall winner, Much Loved status was given to each of the 73 parks which finished in the top 20% overall.

Opening of voting for UK's Best Park coincided with Have a Field Day, which this year fell on Saturday 6th July. Nearly 50,000 people were estimated to have attended the 251 events which ranged from large village fetes to small community and family picnics.

Following on from the publication of Revaluing Parks and Green Spaces in 2018, this May we released the Green Space Index, our new barometer of publicly accessible park and green space provision. Using newly available data from Ordnance Survey, it is the first time such a measure of provision has been produced and it was welcomed by Rishi Sunak MP, Chief Secretary to the Treasury and formerly Parks and Green Spaces Minister, as well as the Scottish and Welsh governments and Ordnance Survey themselves.

of green space provision per person in Great Britain

not living within a ten-minute walk of a green space

Alongside our work contributing to the evidence base supporting the case for parks and green spaces, we continued to work alongside the UK Government and individual policymakers to support them in their efforts for green spaces. Fields in Trust continues to sit on the Government-convened Parks Action Group, working closely with the Ministry for Housing, Communities and Local Government. Earlier this year we welcomed their injection of £13m additional funding to support green spaces and create new pocket parks.

Throughout the summer we saw policymakers at both local and national level get involved in individual campaigns to champion their UK's Best Park nominees and as part of the recent General Election campaign over 250 candidates across 214 constituencies took our Parks Protector Pledge, which accompanied our Pledging to Protect manifesto. Election night saw 21 MPs returned who had taken the pledge and we will work with them throughout the course of this Parliament to support them in keeping the commitments they have undertaken, as well as inviting other policymakers to join their colleagues in taking the Pledge.

Finally, the conclusion of the Summer of Parks saw us launch the first edition of Watch This Space which sets out to help everyone support and champion their local green spaces. It includes an easy-to-use guide to the planning system should you encounter a threat of development on your local park or green space. An update to this initial release, as well as versions specific to Scotland and Wales, will be published in the new year.

As part of our Summer of Parks we were able to celebrate just a handful of the countless individuals and groups who give up their own time to do amazing work for our parks and green spaces year-round. For four individuals though, going the extra mile was literal as they lined up on the start line of the Virgin Money London Marathon to raise funds in support of our work. For Michael Ndlovu, the 26.2 miles were the conclusion of a 6,000-mile journey from Durban, South Africa, which saw him realise his lifetime ambition of running an international marathon.

Thank you to all those who went the extra mile in all senses of the word in 2019 to support local parks and green spaces across the country.

Looking to the past and the future

Fields in Trust has a rich and varied history and 2019 has given us an opportunity to look to the past as we work for the future. Earlier this year we celebrated 90 years of our work in Northern Ireland, which has seen 29 spaces protected in perpetuity, including the football pitch where George Best first kicked a ball as a young boy.

For the first time, this summer we charted our entire 94-year history in an interactive online archive. It tells the story of our founding and early appeals, background of the King George's Fields Foundation and the impact of HRH The Duke of Edinburgh's Presidency, our work in play leadership and green space guidance, as well as looking at more recent activity such as the Queen Elizabeth II Fields Challenge.

Next year we celebrate our 95th anniversary and last month we were delighted to welcome Jo Barnett as our new Chair of Trustees, succeeding Tim Phillips CBE who stepped down after six successful years in the role.

As we look forward to 2020 there is plenty to be excited about as we continue our work to protect, support and champion green spaces for good.