FUNDING OF PARKS: A Royal Legacy 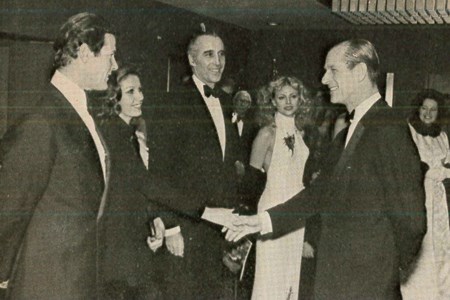 For as long as there have been parks and green spaces there has been the question of how to fund such spaces. In the early days, parks were often paid for by Victorian philanthropists, but the burden soon shifted towards the public purse, bringing with it the inevitable questions of value and worth. As part of our Revaluing Parks and Green Spaces research and Green Spaces for Good strategy, we are calling for a revaluing of these spaces for the benefits they bring rather than what they cost to maintain, and this week our 'Summer of Parks' is looking at the issue of funding for our nation's parks and green spaces.

The importance of funding for the "Playing Fields Movement" was one not more recognised than by HRH The Duke of Edinburgh, who spearheaded numerous fundraising initiatives during his 64 years as our President.

Indeed, His Royal Highness's first act upon taking the Presidency was to launch the Silver Jubilee Appeal during a formal dinner at Mansion House on 20th October 1948. Taking over the role from his uncle, Earl Mountbatten of Burma, The Duke told the assembled crowd:

"I would like to say it is not only an honour, but a very great privilege, for me to follow the extremely distinguished line of Presidents which this Association has been very luck to have (hear, hear). I won't say anything about their luck coming to an end (laughter) but I would like to say that if the Presidency had to change, with all due respect, this seems to be a very fitting moment, because, first of all, there is this launching of a very great Appeal, and secondly, because it is the beginning of the Association's post-war effort, and, in a way, a new name and a new effort might go hand in hand. I would also like to say now that what I lack in experience in these matters I will make up for in effort and industry (hear, hear and applause). I am not suggesting that the inexperience is as far as playing fields are concerned, because I have played on fields, one corner of which has been permanently in the mists - in the north of Scotland - and others which have not boasted of any grass whatsoever (laughter), being mostly salt - in Aden - but in any case, the experience was mainly in the chairborne business. I think it is agreed amongst most people, that the well-balanced citizen is educationally and mentally able, and is also physically able, and I think that we, as the National Playing Fields Association, can de a great deal to make sure that our young people are qualified both educationally and physically for the tasks they will be called upon to perform.

The Duke quickly set about his fundraising goal and organised a ball at the Dorchester, which he patronised and attended alongside Her Royal Highness then-Princess Elizabeth.

In our twenty-fourth Annual Report, for period ended 31st December 1950, it was noted that "during the summer an interesting club was formed called 'The Lords Taverners' whose members are drawn from all branches of the Arts who are interested especially in cricket. Their efforts are to be devoted to raising funds for the Association generally and not only for the Jubilee Appeal". In 2014 a silver salver was presented to His Royal Highness to mark a total of £1 million in donations from the Lords Taverners to Fields in Trust.

That publication also reports on a record which was to be released in 1951 and is widely believed to be the first ever charity single. The proceeds from Frank Sinatra's "If Only She'd Looked My Way" benefitted Fields in Trust, then known as the National Playing Fields Association, and The Duke delivered a spoken introduction on the recording.

The Duke had a keen understanding of the power of all parts of the media and also in 1951, whilst in Malta, starred alongside Bob Hope in a short film which showed poor children whose only places to play were nearby streets. The film reportedly raised £84,000 for the Silver Jubilee Appeal.

The Appeal raised the desired £500,000 by 1952 and by the end of the decade The Duke's efforts had seen double that amount raised for the charity.

As we kick off our discussion on the funding of our parks and green spaces, at a time when they have reached a critical juncture as a result of funding cuts, it is interesting to see that this issue is both not a new one, but also one which can be overcome with enterprise and innovative solutions, which we will explore this week.

Through his support of Fields in Trust, HRH The Duke of Edinburgh has provided a lasting legacy of parks and green spaces protected in perpetuity to ensure people will always have places to play and be active. You too can support our work to protect, support and champion green spaces for good by making a donation.