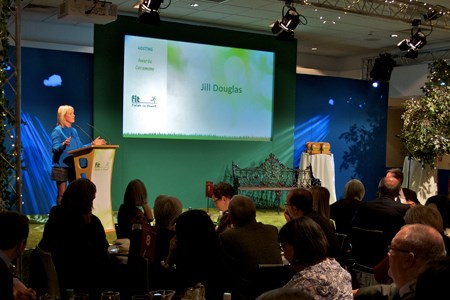 Nominations are now open for the 2017 Fields in Trust Awards, our annual showcase of the hard work of green space champions across the UK; nominations are invited in nine separate categories.

This year's Awards ceremony will again be held in the sparkling sporting surroundings of Lord's Cricket Ground in London, on the evening of Wednesday 29th November.

A new Award for 2017 will celebrate the efforts of 'Friends of' groups to make their local green space an amazing part of their local community. Friends Group of the Year is open to any 'Friends of' Group in the UK who has been inclusive, creative and effective in support and management of their green space.

Recognising the contributions of individuals to their local green spaces are the Fields in Trust Community Champion and Young Champion Awards. Fylde's Julie Norman was named Fields in Trust Community Champion for her work at Park View 4 U at last year's Awards ceremony and nominations are welcomed from those wanting to recognise an individual who really goes the extra mile for their local green space.

The youth variant of the award is supported once again this year by environmental charity Groundwork and is open to UK-based volunteers aged 16 to 24. Kent's Toni Dixon was named Fields in Trust Young Champion in 2016 for her conservation work in the county.

Following a highly successful national Have a Field Day in July, which saw thousands of people across the country come together to celebrate their local green spaces at hundreds of events, Best Have a Field Day will showcase those events that really had the 'wow factor' and highlighted everything that made the green space so special to the community that uses it.

For green spaces protected with Fields in Trust the awards for Most Improved Site and Best Play Initiative return whilst in a change for 2017 there are Getting Active awards recognising projects who have transformed team sports, individual sports and informal activities on Fields in Trust protected sites.

The popular UK's Best Park, as voted by YOU! award will open for nominations later this month.

Nominations in each of the nine award categories run until Sunday 22nd October. Those "early birds" who submit their nominations before Friday 29th September will be entered into a draw to win one of three £100 cheques towards travel expenses to Lord's, should their nomination be shortlisted.