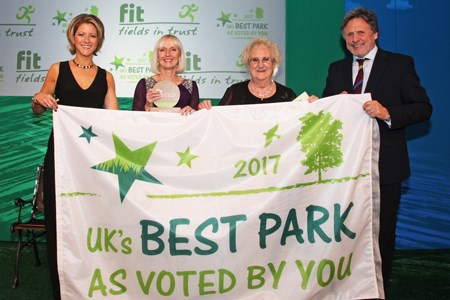 Blackpool's Stanley Park, has been voted by the public as the UK's Best Park at the prestigious annual Fields in Trust Awards 2017. Designed by celebrated landscape architect Thomas Mawson in the 1920s, the park which boasts an Italian marble fountain, boating lake, bandstand, Medici lions, Italian gardens and Art Deco styled café, has scooped the headline award at the annual Fields in Trust Awards 2017.

Now in their sixth year the Fields in Trust Awards showcases some of the UK's best open spaces and shines a light on the efforts and achievements of the people whose tireless dedication ensures that these vital outdoor spaces can be enjoyed by the public.

For the third year running, the UK's Best Park Award, as voted by YOU! celebrates the nation's favourite park. This year the public nominated 360 parks in total from across the UK with over 15,000 votes cast. Stanley Park, Blackpool beat off stiff competition from three other finalists shortlisted, which included Craigavon City Park in County Armagh, Roath Park in Cardiff and Rouken Glen Park in East Renfrewshire. The award was presented by Fields in Trust Trustee and former British Lion Brynmor Williams, at a ceremony at Lord's Cricket Ground in London, hosted by TV sports broadcaster Jacqui Oatley MBE.

Commenting on the UK's Best Park Award 2017 Fields in Trust Chief Executive, Helen Griffiths, said: "On behalf of everyone here at Fields in Trust, I would like to congratulate Stanley Park. The UK's Best Park Award is open to any green space regardless of whether or not it is protected in perpetuity with Fields in Trust. The people of Blackpool have sent a clear message that they love their local park and I hope that Blackpool Council will recognise this by working with us to safeguard Stanley Park as a place for community sport, play and recreation forever."

Parks and Green Spaces Minister, Marcus Jones MP, said: "Many congratulations to Stanley Park on being voted the UK's Best Park 2017 in the Fields in Trust Awards. The public support shown for this park and all the finalists highlights just how much the residents of Blackpool and local communities more widely care about their treasured green spaces. Through the new Parks Action Group we have a great opportunity to ensure our parks remain places to be proud of for generations to come."

Other successes of the night included Kimberley Mpukusa who scooped the Fields in Trust Young Champion Award, supported by Groundwork. An avid tennis player, Kimberley has been actively involved in the BME Sport Cymru project, engaging and inspiring women and young people from BME communities. Her achievements in tennis alongside the challenges she has overcome in her life, have been an inspiration to those around her.

The Fields in Trust Community Champion Award was shared by Marc Ellul of Tatem Park and Kazia Knight of Sandringham Park. Marc has recently led on an improvement project at Enfield's Tatem Park which has seen planting of new trees and plants, the cleaning and restoration of the sunken garden and pond and a new children's playground. Kazia has been the Chairwoman of the Friends of Sandringham Park in Wetherby since its formation. The park now has Green Flag Award status and has won many Yorkshire in Bloom awards. Kazia was the impetus for the park to be protected with Fields in Trust and her ethos is that it is everyone's park.

Friends Group of the Year, an award which recognises the contribution of passionate communities to their local parks, was awarded to Friends of Angel Meadow, Manchester. The group was formed in 2004 to campaign for the park's regeneration, and since then has transformed an abandoned, unloved site into a green retreat amid the bustle of the city.

The full list of winners from the Fields in Trust Awards is as follows:

Commenting on this year's Awards, Helen Griffiths added: "On behalf of the team at Fields in Trust I would like to congratulate all of tonight's winners. These awards give us the opportunity to shine a light on some of the UK's most beautiful green spaces up and down the country. Despite their undeniable contribution to the happiness and health of our communities, parks and outdoor spaces are often undervalued. This annual event not only gives the public the opportunity to champion their favourite park, but allows us to showcase some of the people and organisations that work tirelessly to ensure the upkeep and community enjoyment of these wonderful spaces."