CENTENARY FIELDS: My Grandad and the Great War 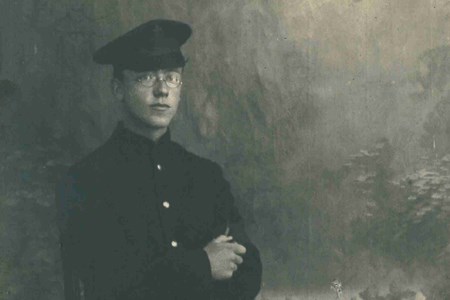 In the latest in our series of blogs, Fields in Trust's Head of Programmes, Angela Lewis, writes about her Grandad's involvement in World War I and how the Centenary Fields programme is working 100 years on to honour the memory of the millions of people who lost their lives in the Great War.

July 10th 1917. I've always known that my Grandad fought in World War I, but it wasn't until a couple of years ago, when I started to investigate his story further, that I realised the significance of that date.

Grandad served in the 2nd Battalion of the King's Royal Rifle Regiment and, along with the 1st Northamptonshire Regiment, they bore the brunt of a German attack – part of Operation Strandfest – on that day, which became known as the Battle of the Dunes. This battle took place at the very northern end of the Western Front in Neiuport in Belgium. By the end of the day on 10th July the regiments had suffered 70-80% casualties, and according to Grandad's account, written in 1920, "fighting was going on all over the place, with the Germans having attacked simultaneously from fore and aft of our position." When a bomb landed in the dugout Grandad was in, he realised that as the dugout, "was filled with wounded and unarmed men, further fight was out of the question, and the German was ready with his flame thrower for anybody who proved bellicose." He, along with the few other survivors of the battle was duly captured.

One hundred years on, it is hard for me to reconcile the gentle, kind man I knew with a soldier who fought for his and his comrades' lives. As I discover more details, my pride in my Grandad and my admiration and gratitude for what these young men did for us and their country knows no bounds, particularly of course those who made the ultimate sacrifice.

That's why I'm so pleased to be part of the Fields in Trust team and to be working with The Royal British Legion to deliver the Centenary Fields programme, launched by Fields in Trust's President, His Royal Highness The Duke of Cambridge, in July 2014 at the War Memorial Park in Coventry.

Centenary Fields across the country are creating a legacy from the 100th Anniversary commemorations of World War I, by protecting valuable green space, in perpetuity, in memory of those who fought and died in the conflict.

For example, Dundee Law, an extinct volcano formed around 400 million years ago, is the city's most distinctive landmark.

At a public meeting held on the 14th January 1919 it was unanimously decided to take steps to erect a Memorial to commemorate the sacrifice made by over 4,000 Dundee citizens during World War I. A competition was held to design the memorial, and permission was granted to site it on the Law. The unveiling of the War Memorial on the Dundee Law took place on Saturday 16th May 1925.

The Memorial is built of Cornish Granite with a Bronze Brazier surmounting it, and can been seen not only from most parts of the City, but also for many miles in the surrounding countryside.

At the other end of the country in Brighton, The Chattri is a memorial to honour the Indian dead of World War I. Its a memorial within remembrance gardens on the South Downs near Patcham at the place where Hindu and Sikh soldiers who died in Brighton war hospitals were cremated.

The Chattri, which means 'umbrella' in Hindi, Punjabi and Urdu, consists of a dome and eight pillars built from white Sicilian marble. The three large granite slabs lie over the original concrete crematory bases and the design symbolises the protection offered to the memory of the dead.

And in between these two Centenary Fields, Meriden in Warwickshire, which has a long-standing claim to be at the very heart of England, has a village green which is home to the National Cyclists' Memorial, built to remember those cyclists who died in World War I. The memorial was unveiled by the then Lord Chancellor, Lord Birkenhead, on 21st May 1921 and the inauguration attended by over 20,000 people.

Although the Army Cycle Corps employed cyclists as scouts and messengers, the 32-ton, Cornish granite obelisk honours all cyclists who died in the Great War. Purchased with donations from cyclists all over the country, including one from Edward VIII (then Prince of Wales) who auctioned his own bike to raise money, the Cornish granite obelisk was placed in Meriden to give the nation's bike riders an equal opportunity to visit.

We hope that many other local authorities and town and parish councils will join Dundee, Brighton and Meriden over the coming months as we move towards the commemoration of the 100th Anniversary of the Armistice. As His Royal Highness The Duke of Cambridge said at dedication of Kensington Memorial Park as a Centenary Field in November 2016, "I urge others to support this important cause and protect these living spaces of remembrance for generations to come." And the Programme is open to sports clubs too, which one of my colleagues, David Sharman, blogged about last year.

Both individually and collectively Centenary Fields across the UK are helping to tell local stories about World War I and the fact that these valuable spaces will always be there will ensure that future generations can continue to remember with pride and gratitude those who gave up their lives for our freedom.