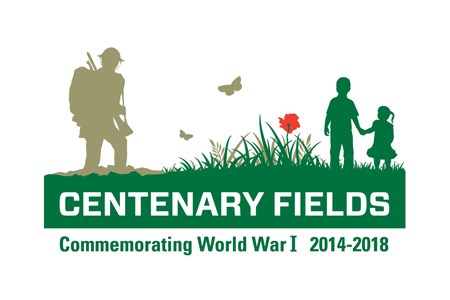 The Centenary Fields programme was launched across the UK in 2014 by Fields in Trust President, HRH The Duke of Cambridge. Working in partnership with The Royal British Legion, the programme permanently protects recreational spaces - such as war memorial playing fields, recreation grounds and memorial gardens - to honour the memory of those who lost their lives in World War I, and to safeguard them for future generations.

The Cropwell Bishop Memorial Hall was built in 1929 to honour the eleven soldiers from Cropwell Bishop who died in World War I. Built on a four-acre site, it quickly became popular with the villagers with many fetes and bazaars held in the grounds. In the years that followed through the 1930s it became home to a cricket pitch, bowling green and the village tennis club earning its status as a key focal point for the community.

One of the highlights was when the hall was visited, in 1932, by HRH The Prince of Wales – later King Edward VIII; photographs and press clippings from the day are still on display in the hall. And in 1937 the Coronation of King George VI was celebrated with teas in the hall, and sports on the playing fields for both adults and children, followed by entertainment and a dance in the evening.

Today the site continues to be a focus for the village and its community – with their summer Picnic in the Park event, fireworks displays and the annual Santa Claus run – and many community groups too; including the Women's Institute, Scout groups and the Heritage Society.

Pam Barlow - who has lived in the village for over 50 years - joined the Memorial Hall Committee in 1987 as Chair, and has remained there ever since! She explains about the hall's charitable status, "It became a registered charity in 1931 and has continued to be a charity to the present day. It's run by the members of the committee; all volunteers who work to ensure the future of the Memorial Hall by organising events and fund raising."

Pam explains that "in recent decades, there have occasionally been murmurings about how the hall and the surrounding land would be a prime development site. The committee were keen to safeguard the site from any potential building plans and leave a lasting legacy for the village and a permanent memorial to those who made the ultimate sacrifice in World War I". Whilst the site belongs to the village as a charitable trust, that doesn't automatically protect the land and hall. Trustees of a charity could decide to sell land if it was in the charity's best interests. Protecting land with Fields in Trust provides additional protection, and many charities decide to do this. In fact, about 25% of all the land across the UK that's protected with Fields in Trust is owned by charitable trusts.

A friend of Pam's – who is the Parish Clerk at a nearby village - mentioned that they were protecting a local park with Fields in Trust, so Pam decided to investigate. "I read about Fields in Trust on their website, and was delighted when I realised we were eligible to apply for the Centenary Fields programme. It's such a wonderful idea, and then to find out that we're the 100th site was the icing on the cake!"

The Centenary Fields plaque – which is given to every site as part of its dedication – reads "In memory of those people of this Parish who gave their lives in the cause of freedom". Pam explains, "we felt it very fitting to unveil the plaque on Remembrance Sunday. After the church service, villagers congregated at the hall for the unveiling and then enjoyed tea and cake – including one made by a villager in the shape of the hall!".

Pam knows that by protecting the site through the Centenary Fields programme the community will continue to enjoy the space for years to come. "I'm so pleased that we have been able to protect this space with the help of Fields in Trust. We've safeguarded this space for the future, and ensured that the hall will continue to be there to commemorate fallen soldiers from the village". Pam also adds, "I would advise any other sites considering applying for the Centenary Fields programme to go ahead! It's so important to protect these spaces".

Fields in Trust Chief Executive Helen Griffiths, concludes, "I congratulate Cropwell Bishop Memorial Hall Charity for being the 100th landowner to protect a memorial space as a Centenary Field. This programme is a fitting way for us and The Royal British Legion to mark the sacrifices made by so many in World War I whilst looking to the future through a living remembrance. We look forward to many more landowners following their lead".

Find out more about how you can get involved with the Centenary Fields programme, including finding nearby sites that are already protected, organising a Centenary Have a Field Day event, donating to support the programme or suggesting a local site that could become a Centenary Field.