CENTENARY FIELDS: Remembering the past, protecting the future 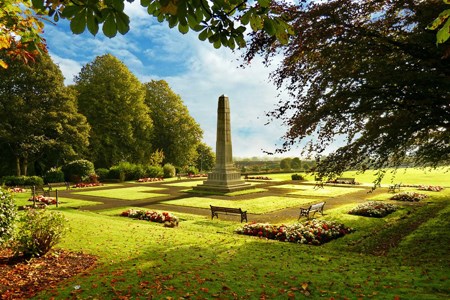 In the latest in our series of blogs, Fields in Trust Development Manager, Terry Housden, writes about the work of our Centenary Fields programme protecting war memorial parks and their legacies from a century ago.

We are now half way through the final year of commemorations to mark the centenary of World War I and as our attention focuses on the 100th Anniversary of the Armistice, we reflect on the bravery and courage of those who sacrificed their lives in the conflict.

Since 2014, through many moving and inspiring events and projects, communities up and down the country have been honouring the memory of those who fell. We here at Fields in Trust are proud to be working with the custodian of remembrance The Royal British Legion to deliver our Centenary Fields programme to permanently protect war memorial parks and playing fields, memorial gardens and other valued green spaces across the nation.

In the months and early years following the 1918 Armistice various ideas were conceived and implemented to remember the fallen. One such initiative which was replicated across the country was the creation by public subscription of public spaces of memorial - our war memorial parks and gardens. Many of these green oases were created by public donations of money and in numerous cases the gifting of land, the intention being to provide communities with a green space of remembrance - spaces for reflection but also where people would be brought together through sport, play and recreation.

The challenging work of creating this legacy was done by those left behind after the war. We can imagine committees being formed, fundraising plans being drawn up and volunteers canvassing support throughout their local community in much the same way as 'Friends of' Groups operate today. Their intention was surely that once established, these war memorial parks and green spaces would always be there.

However, whilst some sites may be subject to covenants and some may benefit from a level of protection through planning law their long-term future is not secure. Covenants can be removed or indemnified against whilst planning policy is subject to change so it is even more important that the custodians of these spaces, usually local councils, legally protect them from the future threat of loss or development.

Centenary Fields dedication with Fields in Trust provides exactly that and is an inexpensive way to ensure that local heritage is respected and that the efforts of those who created this nationwide legacy 100 years ago are honoured to benefit communities now and for future generations.

Through our programme we are pleased to be working with landowners to protect a range of war memorial parks and green spaces such as:

Methil Memorial Park: Given to the people of Methil and containing the town's war memorial and now dedicated by Fife Council in Scotland

Great Harwood Memorial Park: Lancashire park which was purchased by local people and handed over to the local council - Hyndburn Borough Council - who have now protected the nine hectare site in perpetuity

Kidsgrove Memorial Gardens: Home to the war memorial and are the main focal point in Kidsgrove for remembrance of the Great War, now safe from development thanks to Newcastle-under-Lyme Borough Council who have protected it through the programme.

Kensington Memorial Park in west London was bought in 1923 with funds provided by the Kensington War Memorial Committee who wanted to create a suitable tribute to those who had given their lives in the First World War and felt that a new recreation ground would be an ideal memorial. It was dedicated by Kensington and Chelsea London Borough Council and the plaque was unveiled by our President, HRH The Duke of Cambridge, in November 2016.

These spaces may be here for now but if protected as Centenary Fields would be guaranteed to be there for many generations to come.

If you know of a park, playing field, memorial garden or other green space which you would like protected as a Centenary Field then encourage the landowner to join this important legacy from a milestone in our history. What better way to honour those who gave their lives for us but also to complete the work of local communities from a century ago?

Terry Housden is Fields in Trust Development Manager for South of England and Northern Ireland. He can be contacted by any of the below means.

Terry Housden is Fields in Trust's Development Manager for the South of England and Northern Ireland, providing support and advice for more than 500 sites in his region. He continues to work with landowners and other stakeholders to secure protection for more outdoor spaces as well as leading on partnerships and liaison with sports governing bodies and sports councils at county and national level including The FA and Sport Northern Ireland. Terry previously spent twelve years working in sports regulation which followed three years working for a commercial sports organisation.