CHAMPION: One year in the life of the UK's Best Park 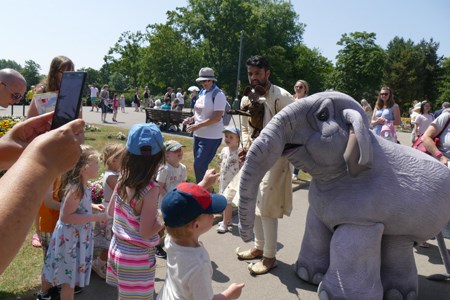 At the 2017 Fields in Trust Awards, Blackpool's Stanley Park was named UK's Best Park. In our first guest blog Elaine Smith MBE, Chairman of The Friends of Stanley Park and the Salisbury Woodland, discusses one year in the life of the UK's Best Park.

We haven't been sitting on our laurels at all as we have had a very hectic year.

Obviously, the park was packed during the hot summer months, but we have put on numerous events to keep them coming - and, of course, to raise funds.

Our group organises bands on our Bandstand every Sunday from the end of May until mid-September. We have music of all types from punk and rock to Gospel singers and school bands. Often there can be 2,500 people there to enjoy the music.

We have had schools coming in to plant a snowdrop trail in memory of any child who has who has died. In February 2019 we will be hosting an event in the Visitor Centre with the Snowdrop Group for the families of these children. A sad and moving event which hopefully gives them a bit of support. This has been an annual event for the past four years.

Our monthly meetings are on the third Saturday afternoon each month and we usually have around 50 members attend and listen to plans and happenings in the park. We always book a speaker - normally about the environment. We hold a Birthday Party every July meeting to celebrate the start of our group and the committee supply and serve afternoon tea to the members using all china crockery. It was our 16th birthday this year. Naturally the December meeting is again a party with games and quizzes. Usually over 60 attend this. Blackpool is a party town!

Our membership has risen to 144 since we started holding a Craft Club on Tuesdays and a Dog Walkers Club on Wednesdays in the Visitor Centre. The dog walkers are wonderful at acting as eyes and ears in the park so deserve their tea and cake each Wednesday.

The Gardening Club is on Thursdays but is, of course, outside. This year they have totally renovated the Memorial Garden and kept the Rose Garden nicely 'dead headed'. The Rose Garden is getting all the attention at the moment. The beauty of the Gardening Club is that they can go and work in the park any time they find themselves at a loose end. They have hi-vis jackets with the name of our group so that others don't think they are just members of the general public.

We run stalls at Conferences and Fairs that are held in a variety of our town's venues, talking about the park and our events and attracting new members. This year we have done everything from International Women's Day to a big catering conference. I personally give talks to organisations and clubs about the Friends of Stanley Park and what we do to look after our park.

All of our major events each year are held over two days - Saturday and Sunday. We quickly learned that it wasn't worth the effort of disrupting the Visitor Centre for only one day.

The first is our Easter Fair with stalls, games, bonnet and greeting card making, egg decorating and Easter Bonnet parade competition. This year well over £1,000 was raised. In June the Quantum Theatre group performed "A Midsummer Night's Dream" on the Bandstand.

The next celebration was Armed Forces Week when anyone proving they had served, were serving or were cadets in any of the forces could bring their family and enjoy tea and 'rations' (spam sandwiches and homemade cake) free of charge.

The following week was Fields in Trust's Have a Field Day but in our case it was also Wordpool Family Day; Wordpool is Blackpool's Arts and Libraries annual Festival of Words. We have helped the Council Library Service to produce this event for several years and they now say they could not manage without us doing both the registration and volunteering at the various events being held all over the park. Usually we have well over 3,000 registrations but unfortunately this year we were in competition with the World Cup and inclement weather, so the numbers were nearer 2,000.

Love Parks Week is the last week in July, the week after the Blackpool School holidays begin. We hire in a Circus School for one day and pay the park staff to help us with other events. This can include wheelchair volleyball to bug hunting or even archery. Something happens each day in the park and woodland. Meanwhile members run an event each day in the Visitor Centre from plant pot painting and planting, making hats to running a treasure hunt - something different each day. This week always proves extremely popular and gets fully booked very quickly.

September brings us to our Biggest Coffee Morning in the World, again for two days and again topping its annual £1,000 for Macmillan.

Autumn comes around very quickly and with it our Halloween and Pumpkin Carving Weekend which is becoming well known for the transformation of our Visitor Centre into a ghostly place with games, fancy dress competition and Ghost Walk around the park. The latter involves several of the Friends being in costume around the park and someone taking a 'ghost' across the lake on a boat. The children absolutely love it. Over 40 people entered carved pumpkins into the various categories in the competition. This Halloween weekend is intended to be a PR exercise for the park but this year at the end we were amazed to find that once again we have topped £1,000 in income.

Have we finished for the year? No, certainly not! Saturday 10th November was our big Thank You 100 event as part of The Royal British Legion's World War I commemorations. The Quantum Theatre Group were back with us but this time not outside but performing in the warmth of our Visitor Centre. They gave three performances of 'Your Country Needs You' which told the story of how and why the war started and went through to the bitter end. We laughed with them, we sang the old songs with them and at the end many of us wept with them too. A wonderful show and well worth seeing.

After the performance everyone gathered at Veterans Walk for a short ceremony to mark the centenary of Armistice Day. This is the pathway where some years ago 20 trees were planted by schools honouring all the conflicts from India 1945 to Iraq 2005. The Blackpool Council Illuminations Dept. made us a three-foot-high THANK YOU 100 light and our Craft Club and the Friends made over 700 poppies of various types. The Mayor and Mayoress dedicated a special commemorative bench that the Friends bought and the Deputy Lord Lieutenant of Lancashire said the Exhortation. After this the Cocker Clock Tower in the centre of the park was lit up by the Illumination Dept. to depict the poignant sight of poppies constantly falling down the Tower.

December is also busy for The Friends of Stanley Park with our Christmas Fair the return of the Quantum Players to the Visitor Centre for a performance of the Snow Queen. In the run-up to Christmas the Friends group celebrated a successful year with a Christmas Dinner at a local hotel and on 22nd December we had our last activity of the year with a Carol and Christmas Song sing-along on the Bandstand.

Throughout the year all the money we raise goes back to support the park. We have a wonderful relationship with Blackpool Park Services whose budget has been cut so much. We have paid for the Bandstand to be repainted, the renovation of the Floral Clock and £5,000 towards the refurbishment of the toilets.

These are just a few of the things that The Friends of Stanley Park have organised over the year in the park that we all love so much.

Elaine Smith MBE is Chairman of the Friends of Stanley Park and the Salisbury Woodland, a group of enthusiastic volunteers who care about two of Blackpool's favourite green spaces. They coordinate staffing of the Visitor Centre which is open five days a week in summer and at weekends for most of the winter and arrange the many events and activities in the park throughout the year. In 2017 Stanley Park was voted UK's Best Park at the Fields in Trust Awards.

UK's Best Park will return in summer 2019. To be the first to hear when nominations open you can sign-up below to receive the monthly Fields in Trust e-bulletin direct to your inbox.