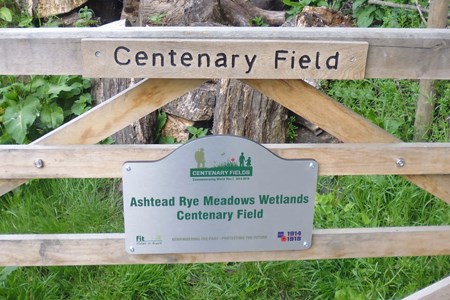 Ashtead Rye Meadows Wetlands in Surrey has become the latest site protected under the Centenary Fields programme and celebrated its new status with a plaque unveiling ceremony earlier this week. Run by Fields in Trust in partnership with The Royal British Legion, Centenary Fields aims to protect war memorial playing fields, parks and green spaces in memory of those who lost their lives during World War I.

The Ashtead Rye Meadows Wetlands are 14 acres of meadow land spanning the Rye Brook from Ashtead Woods Road almost to the M25. Since work commenced on the land in 2011, volunteers have achieved a huge amount. Working with professional contractors they have cleared stretches of the Rye Brook, widened the river, realigned the banks and in a major piece of work created a wetland area with a new pond and several shallow depressions.

One field in the Wetlands has been designated as a Centenary Field to commemorate those 62 residents of Ashtead who fell in the Great War. The remainder of the area has also been protected under Fields in Trust's standard protection.

The transformation was achieved with the support of George and Daphne Burnett, the land owners. Daphne Burnett managed the land for 25 years and it was her original vision to create a Jubilee Wood and wildlife habitat on the Rye Meadows.

Landowner, Daphne Burnett, added: "We are delighted to have this opportunity from Fields in Trust and The Royal British Legion to mark the centenary of World War I in this unique way. Protecting Ashtead Rye Meadows means that there is always somewhere to remember the sacrifices of World War I, but also to enjoy the fresh air and the surroundings. We are grateful for the sponsorship we have received from many organisations, and for the sterling work undertaken by the many volunteers."

The unveiling ceremony on Wednesday 24th May saw an opportunity to thank the generous sponsors who have contributed to the project and included contributions from many local schools in Ashtead who recorded profiles of the fallen soldiers, which were played during the day.

Fields in Trust Chief Executive, Helen Griffiths, said: "This programme is a fitting way for us to mark the sacrifices made by so many in World War I whilst looking to the future through a living remembrance. We are delighted that George and Daphne Burnett are embracing Centenary Fields, commemorating the centenary of World War I for the people of Ashtead in a way they can appreciate forever. We look forward to many more landowners following their lead."