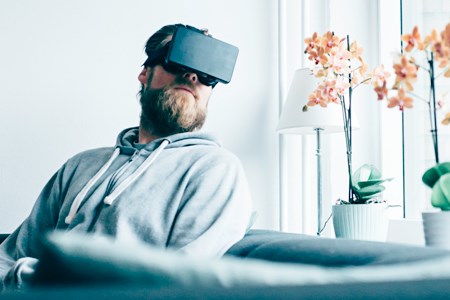 Fields in Trust has hit out at reported plans by one town council to sell its green space and instead provide residents with "permanent parks" through virtual reality headsets.

In a leaked document seen by Fields in Trust, a proposal to Summerbeech Town Council in Greenshire suggests that the council could receive a temporary cash boost by selling its green space to developers. It plans to appease angry local residents by using a portion of the proceeds from the sale to provide each person in the town with a free virtual reality headset and an app which it claims will replicate the feeling of being in a green space.

Speaking about the plans, a Fields in Trust spokesperson said: "These plans are an audacious assault on the cherished green spaces that are central to so many communities across the UK. Not only do they act as meeting places for friends, play spaces for children and home to a range of sport and physical activity they are also havens for local wildlife and nature. Technology has great potential to aid in the provision of high quality green spaces but it is simply not possible to replicate any of their benefits in the virtual world.

"Parks and green spaces are not a statutory service and unfortunately in these tough times many councils see the short-term cash potential of the land rather than the long-term benefits and savings that these spaces bring.

"We would be happy to work with Summerbeech Town Council to demonstrate the annual value of their parks and green spaces to local residents and we think they might be surprised at the results. These annual benefits recur in perpetuity rather than as a one-off cash hit which is what the council are currently pursuing."

The council declined to comment when contacted about the plans by Fields in Trust, but it is understood an app is already in the advanced stages of development and will include an optional bird song soundtrack to provide users with what is claimed as "a fully immersive experience". Council chiefs are said to have waved away concerns that the plans will create an even bigger financial black hole for future generations due to the maintenance costs of the technology, reportedly planning to finance the scheme by selling residents' gardens to land-hungry developers. The mandarins claim that once people are immersed in the benefits of the virtual world they won't notice the loss of their personal green space as well as their public green space.

Of course, however: once a green space is lost it is lost forever. The only way to really ensure "permanent parks" is to protect them in perpetuity through a Fields in Trust Deed of Dedication.