HAVE A FIELD DAY: Thousands set to celebrate our parks and green spaces 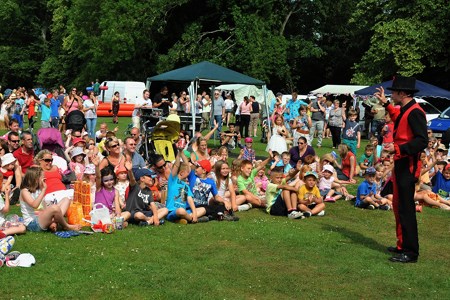 Hundreds of communities across the UK will come together tomorrow to celebrate our local parks and green spaces as part of Have a Field Day. Thousands of people will join a movement of park users championing the spaces that are so special to them.

Events taking place are expected to be as varied as the parks that will be hosting them, from small picnics amongst neighbours to large summer fetes with thousands in attendance.

One such event will be taking place at Creech St Michael Recreation Ground in Somerset, which was named Best Have a Field Day at the Fields in Trust Awards in 2015. Arts, crafts, activities and displays will be followed by live music as the sun sets. In South Oxhey the Playing Fields will be celebrated at the weekly parkrun.

On a smaller scale, supporters of the 38 Degrees campaign organisation have organised picnics stretching the breadth of the country where neighbours will come together on their local green spaces. Tens of thousands more have signed 38 Degrees' petition calling for greater protection for our public parks through Fields in Trust.

Gore Cross Green in Bradpole, Dorset will celebrate their recently gained Fields in Trust protected status at their Have a Field Day event by unveiling a plaque to mark the safeguarding of the site in perpetuity.

Parks recognised in the 2016 UK's Best Park, as voted by YOU! award are also getting involved with Have a Field Day. UK's Best Park winner Rouken Glen Park will be holding a pond-dipping session in the morning before nature walks in the afternoon, whilst Wales winner Pontypool Park will be hosting their Party in the Park.

In Lancashire, meanwhile, history will be celebrated as the 90th anniversary of the founding of Stanley Park is marked by a re-creation of the opening ceremony of nine decades ago in an event involving performances from local school children.

Heritage is a theme which underpins the Have a Field Day campaign, with Saturday 8th July the date Fields in Trust was founded as the National Playing Fields Association in 1925. Throughout the 1930's a series of Playing Fields Days helped raise funds towards the organisation's work, and eight decades later some events will be fundraising for Fields in Trust as part of their day.

Whilst Have a Field Day takes its roots from the past, it is very much about the future of our public parks which are at a critical juncture. Research has found that 92% of local authority park departments have experienced budget cuts in the past three years and that between 2014 and 2016 a total of 214 playgrounds were closed by 65 local authorities across the UK.

Fields in Trust's submission to the Communities and Local Government Committee's Public Parks Inquiry called for a re-valuing of our green spaces as a resource which contributes to public health, mental wellbeing and community cohesion, not simply being viewed as a drain on council finances for upkeep. Early findings from our new research show the value of frequent use of parks and green spaces - in summary that more trips to more parks more often is good for the health and wellbeing of UK residents.

Fields in Trust is championing our green spaces and raising awareness of the positive impact they have on our communities.