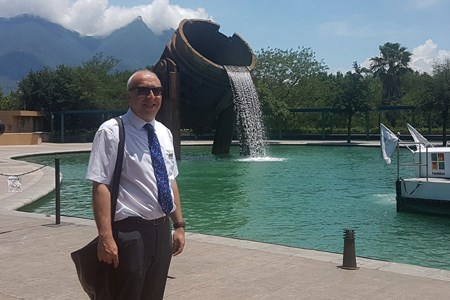 Chris Worman has 35 years' experience in the parks and green spaces sector both as a professional and a volunteer. Chris is currently Rugby Borough Council's Parks and Grounds Manager and also vice chair of the West Midlands Parks Forum. In addition, Chris has been appointed to the Government's Parks Action Group as the parks industry representative.

Being passionate about parks and green spaces for as long as he can remember, he became a Green Flag Award judge from the very start of the awards and over many years of volunteering, he has visited and assessed many hundreds of parks both around the UK and beyond. His international judging tours include Spain, the Middle East and Mexico. For his service to the Green Flag Awards and public parks he was awarded an MBE in the Queen's 90th Birthday honours in 2016.

Can you remember why and when you first started getting interested in parks and green spaces?

I grew up in a densely populated part of inner-city Leicester - parks were just part of what you did as a kid, they were very important to us, that's where we went to play. So, my love of parks started as a child and parks have been part of my life ever since. From school I went straight into working in parks. I joined Leicester City Council as an apprentice aged 16, and I've been in the parks industry ever since. In those days I was one of an annual intake of apprentices, we started off with jobs like weeding and maintaining the beds – it's where I learned my craft and gained my training in horticulture and gardening which has served me well. We moved around quite a bit, so I soon got to see different sides of the work both on the ground and in the offices. I remained at Leicester for several years before becoming an officer and then moved to Rugby Borough Council 17 years ago where I am now Parks and Grounds Manager.

What has been your involvement with the Green Flag Awards?

I became involved with the Green Flag Award scheme as a volunteer from the very beginning in 1996, I believe there are now only two of us left from those very early days. I was there on day one and I am still very involved today - and grateful for the opportunities to travel and see the world. Two months ago, I was in Mexico visiting parks and giving a talk at a conference about the benefits of the Green Flag Awards. It has been a great learning curve to find out about international parks and the communities who use them from across the world.

You've travelled all over the world with your work for Green Flag International - what are the similarities and differences you notice in parks abroad compared to here in the UK?

The financial challenges for parks maintenance and management are very similar in different parts of the world, but I have seen how, in other territories, parks have been viewed as part of a solution to wider issues - of health, climate change, and integration of communities and the best of them have often been funded to directly address these concerns. This is different to the UK situation where we are only now beginning to accept the evidence for these contributions and have not really begun to fund parks to deliver them.

But in the way they are used, parks and green spaces are enjoyed in a very similar way by people in all parts of the world. The patterns of use may change, for example in warmer climates parks are more geared-up for use in the evening and into the night, when it is more comfortable to be outside. Once the security and lighting are sorted out there is no real difference in what visitors do when they come to a park. You still see people exercising on green gym equipment at night, getting more physically active in parks is a global phenomenon. In all locations I have visited you see children on play equipment, youngsters on bikes, teenagers kicking a ball around people walking dogs - it's universal; people all enjoy parks in the same way. We are far more similar than we are different right across the globe.

How have you found working with volunteers and Friends of parks groups?

I have always been inspired by people who show great enthusiasm for their local parks – and want to help improve them for their neighbours to enjoy. Volunteers bring huge added value, as a nation we benefit hugely from volunteering and the parks sector in particular has seen a large increase.

I am a huge advocate of volunteering, because that's what I do myself as a Green Flag judge, and volunteers still need managing, so when I am volunteering I need to know the rules and the guidelines, so I know I am doing the right thing. In return, I practice what I preach and ensure that when I am working with volunteers we have a clear understanding that makes the most of the really valuable time they are spending to help out. As I parks professional, I welcome the support of committed Friends groups – I think there will always be a blended workforce including volunteers, but it would be wrong to rely entirely on volunteers for specialist skills and ongoing, unpaid work - it needs to be a partnership with professional staff to manage volunteers. Volunteer Friends groups can of course generate funds for park improvement which are not available for local authorities, there are so many successful community-led fundraising campaigns which have made significant improvements to local parks, made them nicer places to be because of that local volunteer enthusiasm.

Receiving your MBE for services to parks must have been a very proud moment?

It's obviously a real honour to be recognised with an MBE, both personally and professionally. Most importantly though the award recognised my involvement with the Green Flag Award scheme, so it is recognition of the importance of quality public parks along with all the people involved in their management and maintenance... and it gave me several opportunities to talk to even more people about the value and importance of parks and green spaces!

Can you sum up why you think it is important to celebrate our parks and green spaces?

They are the greatest asset this country has, whether you are in the smallest village or the largest city there are green spaces everywhere as part of our community infrastructure. Who would not want our residents to live in safe inclusive, accessible communities that provide local opportunities to live healthy, sustainable, lifestyle in a quality environment? Parks are community infrastructure - they can be used to address problems of health, inactivity, obesity. I am not saying they can solve the world's problems, but they are part of the solution... and they are just great places to be! We need to provide more good places for people to get together.

Favourite childhood park: Spinney Hill Park, Leicester - growing up in inner city Leicester meant all parks were important places with lots of memories. However, sleighing down the slopes of Spinney Hill, and paddling in the brook are particular ones.

Favourite local park: Market Bosworth Country Park - a large country park on the edge of Market Bosworth, with woodland a lake and lots of walks. It's also a Green Flag Park.

Favourite overseas park: Umm Al Emarat Park in Abu Dhabi - a park that has everything, and really demonstrates the power of parks in bringing diverse communities together. And before you ask yes, it's an international Green Flag Park.

Favourite thing to do at the park: Just sit and watch the world go by. They are the perfect place to gather your thoughts.

Thanks to The Association of Chief Estates Surveyors and Property Managers in the Public Sector for help in preparing this article.