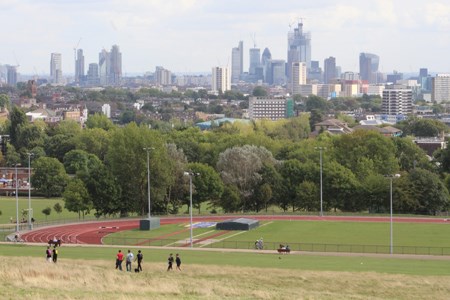 If you are to think of somewhere to explore the natural world, your first thought would probably be the countryside. If asked to name an example you might pick one of the UK's fine National Parks - from the Cairngorms to Dartmoor, most of us will know such a space nearby and will no doubt have spent a couple of hours, a day or longer there.

A timely reminder that remote, rural environments are not the only places to discover nature. This week, to tie-in with the launch of the London National Park City, our Summer of Parks will be looking at the importance of local parks and green spaces for nature. As places for ecosystems to build and thrive, as places to clean polluted city air, as places for kids to discover the natural world around them, as places for people to go to listen to birdsong instead of traffic hum.

The London National Park City will work with residents, visitors and partners across the capital, with three stated aims:

The campaign to make London a National Park City was started six years ago by guerrilla geographer, Daniel Raven-Ellison. Fields in Trust become supporters of the scheme, as did The Mayor of London, Sadiq Khan, members of the London Assembly and a majority of London's 654 local council ward teams and in July 2018 the launch date for the London National Park City was set as twelve months hence.

Local parks and green spaces are a vital part of London's natural landscape - our Green Space Index finds that the Greater London area has 17,150.11 hectares of publicly accessible local park and green space provision. Over 900 hectares of said provision is protected in perpetuity with Fields in Trust. The Index also found that just 10,579 Londoners do not have access to such a park or green space within a ten-minute walk of where they live.

That is only part of the picture, however, with a complete network of green infrastructure from canal tow paths, street planting and green corridors helping to make London a green city befitting of its status as the world's first National Park City.

The founding is acting as an inspiration and encouragement for other UK cities to join the movement and campaigns are already underway in Newcastle-upon-Tyne and Glasgow which hope to see them follow in London's steps and become National Park Cities.

Throughout this week we'll explore the ways urban environments are important for, and can support, nature and the natural environment. This week's 'One Small Thing' also gives you a chance to get involved - why not head out to your local park or green space and see if you can discover some nature you've not found before, be it flora or fauna.