CELEBRATING PARKS: Marking anniversaries and looking to the future 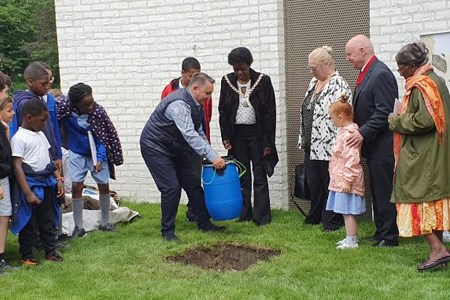 As we conclude our Summer of Parks week focused on celebrating local parks and green spaces it's all about anniversaries, with a number of parks toasting major birthdays at the moment.

Just this week, Southwark Park in south London have been marking 150 years since their opening in 1869. Designed by Alexander McKenzie and covering some 25 hectares close to Surrey Quays on the south banks of the River Thames, the park was one of the first to be established by the Metropolitan Board of Works.

To celebrate 150 years to the day since it was opened, an event in the park on Wednesday, 19th June, saw a time capsule sunk by Mayor of Southwark, Cllr Sandra Rhule, and other dignitaries. On Friday, screenings were held for a celebratory film which was put together in 2014 to mark 150 years since the Southwark Park Act of Parliament, which set in motion the establishment of the space. The film, "It's Our Park", was directed by Stewart Morgan and recorded in the park over the summer of 2014 as well as featuring historic footage and imagery.

Southwark Park was protected in perpetuity with Fields in Trust as a Queen Elizabeth II Field in 2014, meaning it will be there for another 150 years and beyond.

North of the river another of London's best-known parks is celebrating a century and a half since its opening. Finsbury Park was opened to the public in 1869 following calls for a public park in the area growing in the 1840s and in 1857 an Act of Parliament ratified the creation of such a space on part of the old Hornsey Wood.

A little further north in Enfield, this month marks celebrations for Jubilee Park which was opened eight decades ago in 1939. A "Jubilation" event hosted by the Friends of Jubilee Park and attended by Mayor of Enfield, Cllr Kate Anolue, toasted 80 years of the park's history as well as featuring a fun dog show, the Enfield Brass Band and more. The park joins Southwark Park in being protected with Fields in Trust as a Queen Elizabeth II Field meaning local residents will be able to continue enjoying the park for years more to come.

Finally, it's not just in London that well-known parks are celebrating major anniversaries in 2019. Back in March a day of events marked 70 years since the opening of Cardiff's Bute Park in 1949. A prominent attraction on the edge of the city centre and just across the road from the Principality Stadium, the land which forms the park was purchased in 1947 at the same time the adjacent Cardiff Castle and grounds were gifted to Cardiff Corporation. Pontcanna Fields, which are protected with Fields in Trust, sit just to the north of Bute Park on the banks of the River Taff.

Congratulations to all four parks on their anniversaries and celebrations. If you're interested in finding out more about the history of parks and green spaces keep following our Summer of Parks campaign as in a little under a month's time, week beginning 15th July, our theme will be heritage in parks.

Does your local park or green space have a major anniversary this year? We'd love to hear from you - let us know by tweeting @FieldsInTrust and using the hashtag #LoveYourLocalPark!