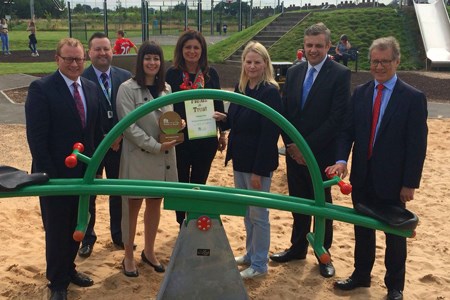 Fields in Trust Chief Executive, Helen Griffiths, today joined Parks and Green Spaces Minister Marcus Jones as he visited Rugby's award winning green spaces. As part of his visit the Minister met volunteers at Centenary Park in the town, who had helped turn a neglected allotment into a space for the whole community. Our research found the creation of the park resulted in local residents feeling healthier, happier and becoming more active.

The park now boasts a large play area, a games area, a green gym and nature area, including flowers to attract bees and butterflies and has been protected as part of the Centenary Fields programme.

The Newbold on Avon Community Partnership and Rugby Borough Council secured over £215,000 to transform the neglected land and Centenary Park was named the most improved park at the Fields in Trust Awards in 2016. The site also received an award from the Department for Farming and Rural Affairs for providing an excellent home for bees and other insect life and enjoys Green Flag Award status.

The Minister visited Rugby to announce that the Government will be renewing the Green Flag Award licence for another five years. Run on behalf of the Government by environmental charity Keep Britain Tidy, the scheme recognises high quality parks and green spaces. The Green Flag Award allows visitors to easily find quality parks and other green spaces to enjoy and sets standards for park managers across the country.

Many of the 1,800 Green Flag Award winning sites across the UK also enjoy Fields in Trust protected status, meaning these local jewels in the crown will always be there for future generations to enjoy. Rugby boasts five Green Flag winning green spaces, many of which were originally derelict sites that have been transformed by the hard work of the community and the local council, including Centenary Park.

Speaking after the announcement, Parks and Green Spaces Minister Marcus Jones, said: "My visit to Rugby demonstrated how parks and green spaces can breathe life into our towns and cities - contributing to the health and well being of the community.

"I am very much looking forward to outlining our future plans to support Britain's parks in due course."

Fields in Trust looks forward to the Minister's response to the recent Communities and Local Government Committee's Public Parks Inquiry report. Our submission to the inquiry called for a change the way public green space is conceived, not as a drain on spending that requires a considerable amount of money to maintain - but rather as an asset which can be deployed to achieve longer term savings and happier healthier more connected communities.

The Inquiry report, published in February, warned that parks face a period of decline from their current tipping point with potentially severe consequences unless their vital contribution to areas such as public health, community integration and climate change mitigation is recognised.