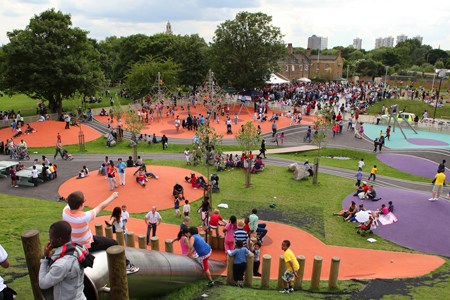 Fields in Trust welcomes a new report from the Association of Play Industries (API) into the state of England's playgrounds and supports calls for increased investment that will positively impact the health and wellbeing of children and young people.

Fields in Trust Chief Executive, Helen Griffiths, said: "Play is the first step children take towards physical literacy and an active lifestyle and therefore investing in play spaces and securing their future should be a priority in combating the negative health impacts of a sedentary population. Parks and playgrounds are vulnerable to closure in these challenging times and it's important that we revalue the enormous contribution they make to our communities."

The report, published today, cites findings from the State of UK Public Parks 2016 report which found that 92% of local authority park departments have experienced budget cuts in the past three years and 95% of parks managers expect there to be further reductions in the next three years.

New research by the API found that 65 local authorities closed a total of 214 playgrounds between 2014 to 2016 whilst a similar number of closures were reported to be planned for the period to 2019. Reasons cited for closures included budgetary concerns, outdated equipment and anti-social issues.

In its conclusions the report calls for "a clear and unequivocal show of support for play and the benefit it brings to young people" and an additional investment of £100 million to deliver an increase in the number of play facilities across the country by around 1,600.

Sufficient provision of space for play is vital to ensure the goal of a More Active Nation can be achieved and also to tackle the rising issue of childhood obesity, which was recognised by the Government as part of their 2016 Childhood Obesity Strategy. New research by the British Heart Foundation recently found that more than 20 million people in the UK are physically inactive, stating that inactivity costs the NHS around £1.2 billion every year.