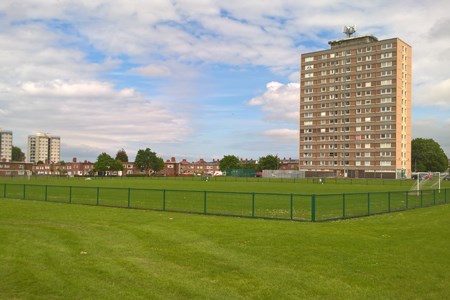 Today marks 90 years of Fields in Trust’s work to protect, support and champion parks and green spaces in Northern Ireland. In the time since 29 spaces have been protected in perpetuity, including the football pitch where George Best first kicked a ball as a young boy.

It was on 15th March 1929 that a meeting was convened in Belfast with the aims of establishing a Branch of the National Playing Fields Association (as Fields in Trust was then known) to advance the 'playing fields movement' in Northern Ireland. The meeting was attended by dignitaries from across the province and a report of the day noted that "The proposal was enthusiastically received and it is expected that a strong organisation will result".

The first space protected in Northern Ireland was in Fivemiletown in County Tyrone in 1937. Grants were provided totalling £250 to support laying out of the space which was managed by a local committee. Further spaces were protected in Banbridge and Ballymoney in 1938, followed by Ballymena in 1940.

Fields in Trust has been most active in Northern Ireland more recently, however, with 21 spaces protected in perpetuity since 2013, stretching from Kilfennan Valley Park in north west Ulster to The Fair Green in County Down.

Belfast City Council and Mid & East Antrim Borough Council have led the way in protecting their parks and green spaces, with both having participated in each of Fields in Trust’s protection programmes to date.

The most recent space safeguarded in Belfast is Cregagh Green in Castlereagh, to the south-east of the city centre. The space was where George Best, dubbed by the Irish Football Association as the "greatest player to ever pull on the green shirt of Northern Ireland", first kicked a football as a young boy and a grant of £5,000 as part of our Active Spaces programme has helped to promote physical activity and community participation in the space.

Mid & East Antrim Borough Council have protected eight spaces in perpetuity in the last four years, including The People's Park in Ballymena which has been protected as part of Active Spaces and will receive a total of £30,000 in grant support, funded by the London Marathon Charitable Trust. The funds will improve already popular walking trails within the park and create a trim trail, with the addition of outdoor fitness equipment manufactured from natural timber, to ensure The People's Park retains its scenic environment along the paths and trails amongst the most beautiful areas of the park.

The Council's Outdoor Recreation Officer, Niall Curneen, explained why they have safeguarded their parks and green spaces with Fields in Trust saying: "protecting these sites for the future means that people will be able to spend time there - enjoying green spaces - for generations to come".

Our Revaluing Parks and Green Spaces research estimates the Wellbeing Value associated with the frequent use of local parks and green spaces is worth £920 million per year to the Northern Ireland adult population. Parks and green spaces also are estimated to save Health and Social Care in Northern Ireland around £3 million per year based solely on a reduction in GP visits and excluding any additional savings from prescribing or referrals.

Across Northern Ireland Fields in Trust protect almost 150 hectares of green spaces for good across ten of the province's eleven local councils. You can find your nearest protected space by entering your post code into our Fields Finder.

Champion: We champion the value of parks and green spaces