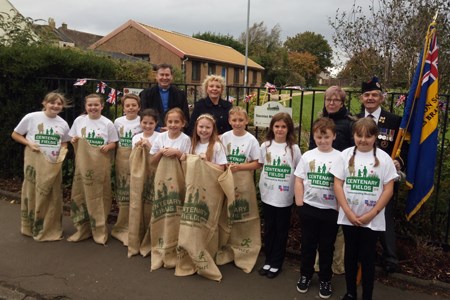 This week our Centenary Fields Legacy campaign passed its half-way point, marking 50 days since the start of the 100 Days Offensive a century ago. It was this week in 1918 that the Grand Offensive started, a series of concentric attacks by the Allies in France which aimed to cut German lines of communications and enable the entire front line to advance.

The first of these attacks was the Meuse-Argonne Offensive which started on 26th September and just three days later the central attack on the Germans' Hindenburg Line commenced with the Battle of St Quentin Canal. It was these offensives which eventually led to the breaking of the Hindenburg Line by the Allies and in turn led to the conclusion of the conflict.

To mark the mid-point of the campaign, Wednesday saw Kensington Memorial Park featured. It was this park that our President, HRH The Duke of Cambridge, dedicated in November 2016 at the half-way point of our Centenary Fields programme. The land which forms the park was acquired for £8,800 in 1923 by the Kensington War Memorial Committee and it was formally opened to the public in 1926 by Princess Louise, Duchess of Argyll. The Duchess was also part of the unveiling ceremony which took place in 1922 at Ilford War Memorial Gardens, which featured in Centenary Fields Legacy on 7th September.

The dedication ceremony at Kensington took place in the park's memorial garden area and two similar spaces also featured this week. Measham's War Memorial Garden (Friday) was paid for by public subscription and opened on 21st May 1921. The space features a memorial at its centre which names the 44 men from the area who fell during World War I and the garden contains 44 lime trees planted in their memory.

The Memorial Gardens on Hengate (Saturday) in Beverely likewise contain the town's war memorial which was unveiled on 18th September 1920 and commemorates 452 men from the town who fell during the Great War. The gardens are situated next to the impressive St Mary's Church and have recently seen the addition of World War I solider figures to mark the centenary.

Another garden to feature this week was Pugh's Paddock (Monday) in Burbage. This space was given to the community by a former rector, Reverend Pugh, in 1953. It features a heritage rose garden as well as a memorial lamp post to those who fell in World War I and is located close to the town's main war memorial.

Didcot's war memorial is located in the gardens at Smallbone Recreation Ground (Tuesday). They held an event as part of Centenary Fields Legacy on Tuesday to unveil their plaque, which designates the space as protected forever with Fields in Trust and has been sited on the base of the war memorial. The memorial takes the form of a small grey marble column on a red brick base and remembers 28 men from Didcot who fell during World War I. As part of the ceremony local school children placed a cross on the memorial for each of those men.

Also marking their inclusion in Centenary Fields Legacy this week was Thornton Memorial Park (Thursday) in Fife. Children from the local school joined the area's Interim Moderator and representatives from the local Royal British Legion as part of an event at the space. Plaques are attached to the park's stone gate posts listing the names of those from the town who served in the Black Watch (3rd Battalion, Royal Regiment of Scotland) and the King's Own Scottish Borderers who fell during World War I.

The week concluded by marking National Sporting Heritage Day with Roding Lane Sports Ground (Sunday). The space is home to Wanstead RFC who embarked on a commemoration project after finding a fixture card from the 1919/20 season which listed the names of 22 club members who did not return from World War I. A plaque has been added to the clubhouse listing their names, an avenue of lime trees has been planted with one for each man who fell and the project culminated with the space's protection as part of Centenary Fields.

Next week the Centenary Fields Legacy campaign features another seven spaces each with their own unique story and link to World War I. Don't forget to visit our interactive online map at 11am each day to discover the story of the latest featured space and explore those already showcased. You can also learn more about the Centenary Fields programme and The Royal British Legion's "Thank You" campaign as well as find out how you can get involved.

Week Six:
All the stories from the sixth week of the Centenary Fields Legacy campaign