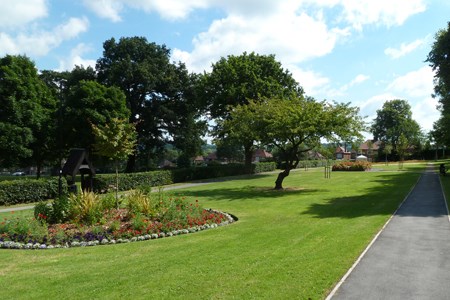 This week our Centenary Fields Legacy campaign passed its three-quarter mark, meaning there are now over 70 stories on our interactive map of spaces which are protected forever in memory of those who lost their lives during World War I.

Each space has some tangible link to the Great War; be it home to a historical or contemporary war memorial, associated with an individual who went off to battle and showed gallantry in combat, or even having served the war effort itself, as last week's seven spaces showcased.

Following on from Week Ten, this week featured another space which served the war effort in Somerset. Battery Point (Wednesday) has long been of strategic importance due to its cliff-top position with views out over the mouth of the Severn Estuary. In the early years of World War I the area was manned by Devon and Cornwall Fire Command, supported by No2 Heavy Battery Devon Royal Garrison Artillery who were based at the nearby Royal Hotel. A small memorial event was held at Battery Point on Wednesday involving local schoolchildren and members of The Royal British Legion (pictured below) to mark the space's inclusion in the Centenary Fields Legacy campaign.

Whilst some spaces like Battery Point have been of significance for years, others have only been established more recently in memory of the events a century ago. Work started on Lidget Green Memorial Garden (Friday) in 2016 and the space was formally opened in April 2017 as an inclusive, green memorial to those from this part of Bradford who served and sacrificed during the war. Its importance as a community space for quiet remembrance is enhanced by the large planting beds which contain nut and fruit trees, herbs and vegetables.

Also unveiled during the centenary commemorations was the memorial at St Catherine's Park (Thursday) in Lostock Hall. Whilst there are many war memorials across the borough of South Ribble, this is the first which lists together all those who lived within the current borough boundaries that fell during World War I. The striking structure is made of a steel alloy which is designed to rust evenly and has a silhouette of a soldier and the word 'Remember' cut into it. 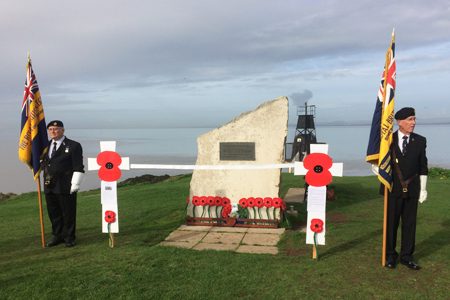 The geographic area covered by memorials can range from borough-wide, as at St Catherine's Park, to small villages and local areas, as at Hersham Memorial Garden (Sunday) in Surrey. In total 900 men from the village of Hersham went off to fight in World War I and the memorial remembers the 115 who did not return. It was unveiled on 7th November 1920 and between the wars, a captured German gun was displayed in the park before it was removed and melted down to make British weapons for World War II.

Likewise, the war memorial in Newmarket is located in a peaceful War Memorial Garden (Tuesday) and remembers those from the town who didn't return from battle. The memorial takes the form of a large granite pillar on a stepped base, topped by an urn. It lists the names of 218 men from the town who fell during World War I as well as ten civilians and 80 servicemen who lost their lives during World War II. The memorial was unveiled on 16th October 1921 by Major-General Sir William Lambton and dedicated by the Bishop of St Edmundsbury and Ipswich.

At Talbot Memorial Park (Saturday) in south Wales, the local memorial takes the form of a bronze sculpture of victorious peace on a granite pedestal and was unveiled on 4th July 1925 by Field Marshal Sir William R Robertson. The space also features a main gate which is dedicated to Rupert Price Hallowes, who received the Victoria Cross for his actions at Hooges in 1915 and is also remembered at Memorial Park in Redhill, which featured during Centenary Fields Legacy on Sunday 23rd September.

As Lidget Green's Memorial Garden shows, however, not all memorials are physical; Mansfield Road Recreation Ground Memorial Gardens (Monday) sits at the southern end of the Recreation Ground as a living memorial to those who served and sacrificed. In the centre of the space is a rose bed planted to celebrate The Royal British Legion and a plaque commemorates the planting which was performed by members of the Legion. Poppies were also sown in the spring of 2014 to mark the centenary commemorations.

Next week we move towards the conclusion of the centenary commemorations as our programme partners The Royal British Legion launch this year's Poppy Appeal and our Centenary Fields Legacy campaign features another seven spaces from across the UK. Don't forget to visit our interactive online map at 11 am each day to discover the story of the latest featured space and explore those already showcased. You can also learn more about the Centenary Fields programme and The Royal British Legion's "Thank You" campaign as well as find out how you can get involved.

Week Nine:
All the stories from the ninth week of the Centenary Fields Legacy campaign