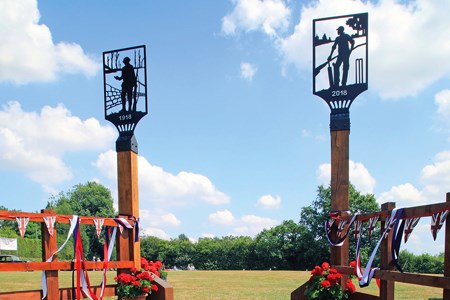 Many acts of memorial to those who fought and fell in World War I were carried out in the years that immediately followed the end of the conflict, with the personalities who didn't return still in the memories of those they left behind.

Commemorations of the 1920s are represented in many of this week's Centenary Fields Legacy spaces and it was in this decade that the memorial was erected on Rayne Hall Green (Tuesday) in Essex. The space was featured as part of the campaign on 4th September, a poignant date being the anniversary of the day in 1914 that the Daily Mail reported on 30 young men from the village enlisting in the Ninth Essex Regiment. The names of 33 men who ultimately perished in conflict are remembered on the green.

Equally personal and timely was Brenchley Memorial Fields (Saturday) in Kent. This space featured as part of Centenary Fields Legacy on 8th September, which was the birth date, in 1886, of Siegfried Sassoon. The poet, who played cricket on the space as a boy, served in World War I and was decorated with the Military Cross for bravery.

In many cases, the land on which memorials were erected was also gifted to the townspeople, or purchased through public subscription, for the purpose of remaining as a lasting memorial to the war dead.

Methil Memorial Park (Wednesday) is one such space and The Burgh of Buckhaven and Methil took ownership of the land in 1921 for the people of Methil as a memorial to World War I. A formal war memorial was erected on the space in 1922 and unveiled by Admiral of the Fleet Lord Wester Wemyss, whose estate the land had originally belonged to.

In Ilford in Greater London, £5,000 was raised through public subscription and fundraising in the years which followed the end of the war and went towards the construction of Ilford War Memorial Hall and its surrounding gardens (Friday). The hall was originally intended to serve as the entrance to the Children's Ward of the King George V hospital, which had served as a military hospital during World War I but after the demolition of the hospital it now remains as a memorial hall and contains a list of the fallen.

Unfortunately, just because land was gifted in memory of those who fell during World War I doesn't mean it is necessarily safe. Ledbury Recreation Ground (Sunday) was under threat of development as recently as a few years ago with a supermarket interested in purchasing the site. Thankfully this space was saved and subsequently protected as a Centenary Field ensuring it always remains as intended, a place for the townspeople in memory of the 85 local men who gave their lives during World War I.

Whilst many memorials were housed in dedicated spaces, others were added to existing parks, such as at Alexandra Park (Monday) in Vale of Glamorgan. The park itself had first opened in 1901 but a cenotaph was added in 1924 with a Garden of Remembrance and special topiary work being added in the same decade. Names of those from the area who lost their lives in both World Wars are recorded on the sides of the memorial whilst on the front stands a bronze figure of winged victory holding a wreath and a sword.

It was a similar story in Weston Park (Thursday) in South Yorkshire which had originally opened as one of the first municipal parks in Sheffield in 1875. The York and Lancaster Regiment Memorial, which is topped by a figure of winged victory with a World War I officer and private flanking the central column, was unveiled in 1923 and commemorates the loss of more than 8,800 soldiers during World War I, including members of the Sheffield Pals.

Whether given in memory of tens, or of thousands, each of these spaces remains as important a memorial for their local communities today as when they were opened or unveiled in the 1920s. Protection with Fields in Trust through the Centenary Fields programme means they will remain as such not just for the next 100 years but in perpetuity, a lasting legacy of remembrance across the UK.

The Centenary Fields Legacy campaign continues next week starting in Derbyshire as a community unveils a prototype of a new installation on their protected space in memory of those who died during World War I. Don't forget to visit our interactive online map at 11 am each day to discover the story of the latest featured space and explore those already showcased. You can also learn more about the Centenary Fields programme and The Royal British Legion's "Thank You" campaign as well as find out how you can get involved.

Week Four:
Take a look back on the spaces featured in the fourth week of Centenary Fields Legacy