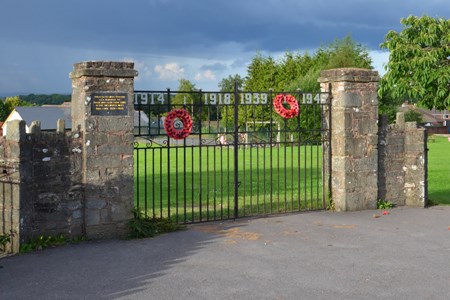 With the fourth week of our Centenary Fields Legacy programme now complete the interactive map is starting to fill up with spaces all across the UK protected in perpetuity in memory of the millions who lost their lives during World War I. You can use the map to explore all the spaces already featured and find one close to where you live. If there isn’t one nearby then don’t forget to keep checking back between now and 11th November when the programme concludes.

Each of the Centenary Fields featured has its own link to the Great War and its own unique story to tell. Many of the spaces feature traditional cenotaph memorials and it was at one such space that the week started, at Sough Park Memorial Gardens (Monday) in Lancashire. The memorial itself was designed as the centrepiece of a new park and interestingly was unveiled four years prior to the park itself formally opening. Bronze plaques on the memorial list the names of 166 local men who fell during World War I and the names of the 30 men who lost their lives during World War II were later added.

Many memorials to those who fell in World War I were erected in the years immediately following the cessation of conflict, but in locations where no tribute was dedicated in the 1920s new memorials were established following World War II to those who lost their lives in both conflicts. This is the case in St Briavels in Gloucestershire where commemorative gates were erected at the entrance to the playing fields (Saturday). The gates include the dates of both wars and plaques to either side record their significance and the names of those from the parish who fell. More recently the space's Centenary Fields plaque has been added to the gate posts.

Whilst memorials are traditionally thought of as cenotaphs they can take many forms and in Southwell in Nottinghamshire their War Memorial Recreation Ground (Wednesday) features a striking dedicatory archway at its entrance. It was likewise unveiled following the end of World War II, by the Provost of Southwell in 1948, and gold lettering across the top reads "In proud and faithful memory of the men of Southwell who gave their lives in war".

In many locations remembrance takes the form of trees which are planted and live on in memory of those who gave their tomorrow on the battlefield. Often trees can be dedicated in memory of specific soldiers, as is the case in two of this week's featured spaces. A line of twelve English oak trees sit adjacent to Goathland Centenary Cricket Field (Sunday) which were planted in 1920 by Mrs Kate Smailes in memory of the twelve men from Goathland who didn't return from the front line, one of whom was her son, George.

The trees planted at Redoubt Centenary Field (Thursday) in Eastbourne remember local men who fell in conflict as well as Henry Allingham. When he died on 18th July 2009 Allingham was the world's oldest man at 113 years of age and one of the last surviving World War I veterans. Awarded the Gold Medal of Saint-Omer and France's highest military honour, the Légion d'honneur, from his World War I service, Allingham saw service on both the Western Front and at the Battle of Jutland as a member of the Royal Naval Air Service before transferring to the Royal Air Forces when the RNAS was merged with the Royal Flying Corps on 1st April 1918. Later in life Allingham was recognised as the last surviving founder member of the RAF, even though he still considered himself a naval serviceman.

Individual stories feature prominently in many protected Centenary Fields and Churchfield Green (Friday) in Kent is no different. The memorial on the green commemorates the staff and servicemen of Wye Aerodrome, a temporary World War I training field which was based nearby. Airman Cecil Edmund Tombs was just 20 when his plane is understood to have collapsed mid-air during a training flight on 31st August 1916. He is one of 15 men who lost their lives whilst training at the airfield.

The stories of individual sacrifice and contribution don't just feature those who saw active service during World War I, however, as was the case with Belmont Park (Tuesday) in east Belfast which was casually used for generations before being formally laid out in the 1980s. The space is just a short walk from Craigavon House whose owner, James Craig, made it available for wounded soldiers returning from the Somme. The house later became known as the Somme Nursing Home and was headquarters of the Somme Association until 1999.

Remembering the sacrifices and telling the stories of individuals who fought and fell in World War I is the theme of The Royal British Legion's "Every One Remembered" programme where the public are invited to make a commemoration for one of the servicemen or women who didn't return from battle. This could be a relative, someone named on a local war memorial or someone selected at random. So far over 480,000 have been remembered but over 570,000 are yet to be so.

The Centenary Fields Legacy campaign continues next week starting in Wales and featuring spaces from across Great Britain, each with their own unique story and link to World War I. Don't forget to visit our interactive online map at 11am each day to discover the story of the latest featured space and explore those already showcased. You can also learn more about the Centenary Fields programme and The Royal British Legion's "Thank You" campaign as well as find out how you can get involved.

Week Two:
Our round-up of all the spaces featured during the second week of Centenary Fields Legacy