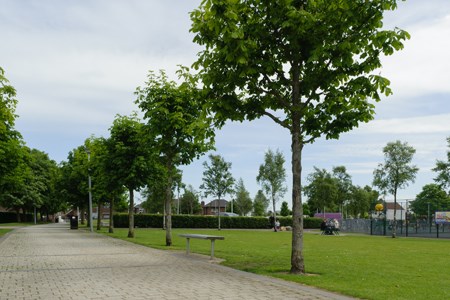 The completion of the ninth week of our Centenary Fields Legacy programme means that 100 years ago the Great War was just five weeks from its conclusion. Even at the start of October 1918 it was not yet clear that the cessation of hostilities would come so soon, but as the Grand Offensive continued the main attacks on the Hindenburg Line were now taking place and by 5th October 1918 the Allies had completely broken through 19 miles of the German front line.

This week Centenary Fields Legacy started in Leicestershire, at Coalville Park (Monday). The park itself originally opened in March 1899 but its formal link to World War I did not come until 2014 when a peace garden was created as part of the area's centenary commemorations. The garden remembers those who fell in both World Wars and is an area for quiet reflection including formal planting, metalwork features, mosaics and seating.

Another space which has seen a more contemporary memorial added is Lilian Bland Community Park (Thursday). The obelisk memorial was unveiled by local clergy on 30th September 1990 and remembers all those from Glengormley who gave their lives in conflict. The park itself is named after Lilian Bland, who in 1910 became the first women in the world to design, build and fly an airplane. Bland lived a few hundred yards from the park and flew the Mayfly from Carnmoney Hill which overlooks the Community Park.

The space was protected by Antrim and Newtownabbey Borough Council as part of their centenary commemorations and the Borough's Mayor, Councillor Paul Michael, said of the dedication: "We are delighted to participate in the Fields in Trust Centenary Fields programme to publicly demonstrate our gratitude to the World War I generation in this unique way. Protecting Lilian Bland Community Park means our local community will always have somewhere for play, sport, or a quiet moment of reflection and we are pleased to mark the protection of parks and green spaces across the UK in this, the final year of WWI centenary commemorations".

Whilst both Coalville Park and Lilian Bland Community Park have seen memorials as more recent additions, two of this week's spaces became remembrance spaces in the years immediately following the end of the war. Great Harwood Memorial Park (Tuesday) in Lancashire was opened on 25th July 1920 in memory of the 372 men from Great Harwood who had fallen during the Great War. The space covers 22 acres and at its centre is the formal war memorial, which was unveiled on 2nd October 1926 by Maj Gen Sir Neil Malcolm KCB CB DSO assisted by Mrs Ormerod who had lost three sons in the war.

The memorial at The Old Steine (Wednesday) in Brighton was unveiled on 7th October 1922 by Rt Hon Earl Beatty OM GCB GCVO DSO on the triangular section at the north of Old Steine Gardens, which were created in 1846. The memorial itself remembers 2,600 people from the area who gave their lives in World War I and is based on a Roman water garden with a memorial pool and fountain. Set behind the pool is a semi-enclosed temple, formed by a rectangular panel of stone carved with theatres of World War I at the centre of a colonnade of four-sided columns.

Whether it contains thousands of names or just a few, each individual memorial is equally important to its community as a way of remembering those from the area who served and sacrificed. The stone war memorial in Lytchett Matravers is located on the corner of Old School Green (Friday) and lists 31 people from the village who gave their lives in World War I, as well as names of those who have fallen in subsequent conflicts. An inscription at the top reads "In grateful memory of those from Lytchett Matravers who gave their lives in the service of their country".

Of the near 150 men from Brindle in Lancashire who went to the Front, 17 did not return and Brindle Community Hall Open Space (Saturday) is a space which remembers their sacrifice. In 1920, four of the returning soldiers requested to have a place of recreation "to fraternise as they had done in the trenches" and to help them forget the horrors of war. The land was donated by Lord Chesham and opened in 1923 with the current Community Hall erected in 2006.

All of these spaces are focal points for remembrance in their communities and Halstead Public Gardens (Sunday) in Essex is the final point on the annual Remembrance Parade as well as being location of the Remembrance Service. The gardens, which are landscaped in Victorian fashion with attractive planting, a bandstand and a pond, are a memorial space to those from the town who have fallen in conflict and also include a formal World War II memorial listing 37 names.

Next week Centenary Fields Legacy moves to within a month of its conclusion by featuring seven spaces which served the war effort 100 years ago. Don't forget to visit our interactive online map at 11am each day to discover the story of the latest featured space and explore those already showcased. You can also learn more about the Centenary Fields programme and The Royal British Legion's "Thank You" campaign as well as find out how you can get involved.