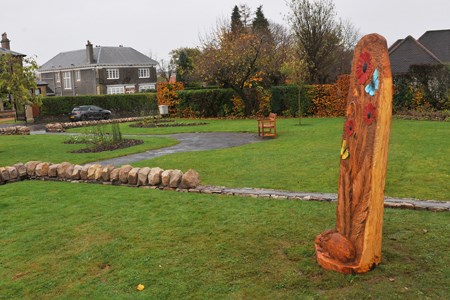 On Wednesday Fields in Trust launched our Centenary Fields Legacy campaign, where each day we'll be featuring one space protected as part of the Centenary Fields programme in memory of those who lost their lives during World War I.

Wednesday 8th August marked 100 years to the day since the start of The Hundred Days Offensive with the Battle of Amiens. This series of offensives launched by the Allied powers pushed the Germans out of France and beyond the Hindenburg Line, leading to the Armistice.

To mark the end of the war, The Royal British Legion are leading the nation in saying 'Thank You' to those who served and sacrificed. Centenary Fields Legacy is partnering with 'Thank You' and highlighting the permanent legacy of protected green spaces that the programme leaves.

The Centenary Fields Legacy campaign commenced on Wednesday with War Memorial Park in Coventry. This large 120 acre park was the location for the launch of Centenary Fields on Wednesday 16th July 2014 by Fields in Trust President, HRH The Duke of Cambridge. As well as unveiling the park's Centenary Fields plaque, His Royal Highness laid a wreath at the foot of the war memorial, took part in sport and educational activities and helped local school children plant poppy seeds. In his speech The Duke called on local authorities across the UK to support Centenary Fields and to "safeguard these living spaces of remembrance for generations to come".

The memorial at War Memorial Park is particularly impressive, standing at around 90 feet high. It was dedicated by Field Marshal Earl Haig in 1927 as one of his last official acts as President of the Legion before his death. Inside the memorial is a room called the Chamber of Silence which holds the "Roll of the Fallen" listing all those from Coventry killed in conflict.

A tangible memorial is just one way in which a Centenary Field could be linked to World War I, however, with many spaces protected having served the war effort. In Wales, Bailey Park, featured on Thursday 9th August, was used as early as the second day of the war when mustering soldiers from the 3rd Mons Regiment marched on the park and were given tea.

Serving the war effort but in a much different way is Bentra Golf Course and Whitehead Diamond Jubilee Wood in County Antrim, Northern Ireland, which was featured yesterday, Saturday 11th August. This space was once home to Whitehead Aerodrome, the first military aviation facility in Ireland. Airships patrolled out of the site protecting ferries and convoys coming in from the North Channel.

So much of what happened in World War I was about individual bravery and outstanding heroism in the most horrific of circumstances and many of the Centenary Fields have individual stories of their own. One such space is Miss Whalley's Field in Lancaster which is featured today, Sunday 12th August. The space is named after Miss Geraldine Whalley who gifted it to the children of the city in memory of her father and brother, both of whom died during the Great War.

Not all Centenary Fields have a historic link to World War I, but may have a more contemporary connection having been established or designated as a space for remembrance or reflection more recently, many as part of the centenary commemorations.

Coronation Gardens in East Dunbartonshire, featured on Friday 10th August, is one such space. This was the first Centenary Field dedicated in Scotland and has seen the addition of a striking sculpture depicting growing poppy flowers as part of the Council's World War I commemorations.

Over the coming weeks we will be featuring one more Centenary Field each day until Sunday 11th November, each with their own unique story but brought together by the lasting legacy of remembrance they are a part of through Centenary Fields. Many of these spaces will be holding events on their designed day to mark their protection in perpetuity and remember the sacrifice of those locally during the Great War. You can discover the spaces featured already through the interactive map on our website and keep checking back at 11am each morning when the next featured space will be revealed.

You can also learn more about the Centenary Fields programme and The Royal British Legion's 'Thank You' campaign as well as find out how you can get involved.