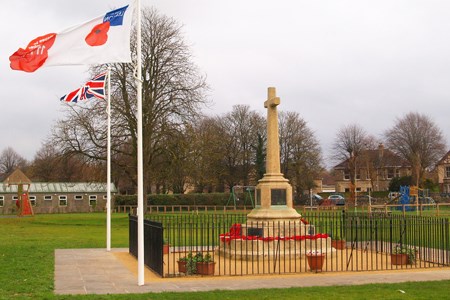 It is estimated that around 70 million military personnel were mobilised during World War I with around 20 million deaths and a further 21 million wounded as a direct result of the conflict. The effects of the war touch the lives of many millions more, both on the continent and here in the UK. As many of the spaces so far in our Centenary Fields Legacy campaign have shown memorial parks were often a way of ensuring those sacrifices would never be forgotten.

When telling the complete story of the conflict which affected so many, it is important to go beyond the numbers and explore the stories of the individuals behind the statistics. That is what our Centenary Fields Legacy campaign did this week with seven days of individual stories linked to the Great War.

The week started in Staffordshire at King's Bromley Village Hall Play Area (Monday). The space is opposite 'The Rookery', where William Grundy lived with his five brothers, all of whom served during World War I. William enlisted with the 9th Battalion Leicester Regiment in September 1914 and went to France early the following year.

Whilst his five brothers all survived the war, William was killed in action aged just 23 at the Battle of the Somme in September 1916. He was the only man from King's Bromley to die at the Somme and the Play Area is protected in his memory. You can leave a tribute to William as part of The Royal British Legion's Every One Remembered initiative.

Of the millions who lost their lives on the battlefields of France, millions more lived to tell the harrowing tales of what they had witnessed. One of the most famous such men is Private Harry Patch who was known as Britain's "last fighting Tommy" in the years up to his death aged 111 in 2009. Patch was born in Combe Down and attended the unveiling of the memorial at Firs Field (Saturday) on 28th May 1921.

In a feature from the Imperial War Museum, Patch recalls being wounded and losing his friends on 22nd September 1917: "The night we caught it, we were in the front line and we were going back. We had taken the German front line and the German support line and were coming back through the German old front line. We had to cross what was the old No Man's Land. It was there that a rocket burst amongst us. It killed my three mates, it wounded me. We were on open ground. September 22nd, half-past ten at night. That's when I lost them. That's my Remembrance Day."

A very select number of those who went to the battlefields were awarded a Victoria Cross, the highest award in the British honours system, for their bravery and gallantry "in the presence of the enemy". Of the 1,358 Victoria Crosses that have been handed out since the first in 1856, 628 were given for acts during World War I. As part of the centenary commemorations the Ministry of Housing, Communities and Local Government are running a scheme to lay commemorative paving stones close to the birthplaces of all Victoria Cross recipients, many of which have been placed in parks and green spaces.

Buckley's Coronation Gardens (Friday) is home to the Victoria Cross paving stone of Frederick Birks who was awarded the medal for his actions at Glencorse Woods in Ypres in September 1917. Alongside a corporal, Birks forced a garrison to surrender and later captured 16 men in another attack. He was killed by the shell the following day whilst standing exposed, trying to dig out some of his men who had been buried by enemy shelling.

The Victoria Cross paving stone of Francis Miles is located at Clearwell Recreation Ground (Thursday), which is overlooked by the house Miles was born and raised in. He won the VC for his actions in October 1918 when he went forward alone under heavy fire, putting two machines guns out of action and capturing a team of eight before beckoning his company forward who were able to capture sixteen more guns, one officer and 50 further men.

Two of the Victoria Crosses featured this week were presented by Fields in Trust's founder, King George V. Commander Harold Auten is remembered through a Victoria Cross paving stone at Park Gardens (Tuesday) for his acts of bravery in July 1918. The ship Auten was commanding was attacked and nearly destroyed by a U-boat but despite this Auten's crew were able to return fire and sink the vessel.

The Victoria Cross award to Rupert Price Hallowes was made posthumously and was presented to his mother and brother at Buckingham Palace. Hallowes showed "conspicuous gallantry" in battle at Hooges in Belgium with the shrapnel wounds he sustained causing his death five days later. His Victoria Cross paving stone is located at Redhill's Memorial Park (Sunday).

Finally, Victoria Cross Grove (Wednesday) at Dunorlan Park commemorates ten recipients of the medal with links to Tunbridge Wells, including four who served in World War I. One of them was Lt. Col. William Clark-Kennedy who won the award for his actions on August 1918. Despite his battalion having sustained heavy casualties, Clark-Kennedy led his men forwards and by controlling the direction of neighbouring units enabled the whole brigade to advance. He was seriously wounded the following day but refused to be evacuated until he had gained sufficient ground for the advance to resume.

These seven stories epitomise the aims of The Royal British Legion's Thank You campaign, which is saying thank you to those who served, scarified and changed our world 100 years ago.

Next week the Centenary Fields Legacy campaign reaches its half-way point with seven more spaces, starting in Leicestershire. Don't forget to visit our interactive online map at 11am each day to discover the story of the latest featured space and explore those already showcased. You can also learn more about the Centenary Fields programme and The Royal British Legion's "Thank You" campaign as well as find out how you can get involved.

Week Six:
All the stories from the sixth week of the Centenary Fields Legacy campaign

Week Five:
A round-up of the seven spaces featuring during the fifth week of Centenary Fields Legacy