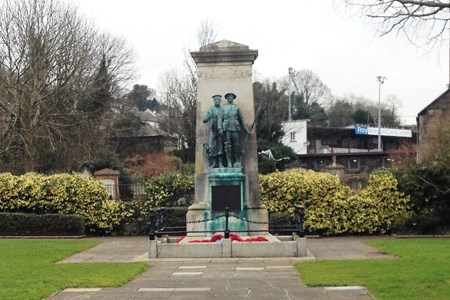 Remembrance is much more than just 11am on Sunday 11th November each year, and as our Centenary Fields Legacy campaign is showing, marking the events of 100 years ago can take many forms. The sixth week of the campaign has seen historic spaces which pre-dated the conflict, spaces which were created in the immediate aftermath of war and more contemporary spaces as well as featuring remembrance acts through the years since the cessation of conflict.

The week started at Belper Memorial Gardens (Monday) in Derbyshire which were established with the support of a local philanthropist, George Herbert Strutt. A memorial was unveiled on 7th November 1948 which records the names of the 225 local men who fell during World War I. As part of the centenary commemorations Belper Town Council have also been engaging in contemporary remembrance activities and earlier this year installed a Victoria Cross Paving Stone in a bed planted in the shape of the VC, 100 years to the day since Charles Edwin Stone won the VC for his "Most conspicuous bravery, initiative and devotion to duty under heavy gas and shell fire..." at Caponne Farm in France.

To mark their inclusion in the Centenary Fields Legacy campaign on Monday, the Town Council unveiled a half-size prototype of a new installation called "Sacrifice", a representation of Jim Green who came from the town and fell during the War. The events of the day were documented in a short video.

Whilst Belper's memorial wasn't added until after World War II, many were unveiled in the years which immediately followed the cessation of conflict, as was the case with the memorial in Larne, County Antrim. A War Memorial Committee was formed to discuss the best way to honour the 147 local men who hadn't returned from battle with £4,600 raised by public appeal to fund purchase of land and commissioning of a memorial, which was unveiled on 7th March 1922 and later moved to its current position in Inver Gardens Memorial Park (Tuesday) in 1977.

Also erected in the years immediately following the end of the war was the memorial in Aberfeldy. Unlike in Larne, however, this memorial was sited on existing recreational space, being placed at the entrance to The Lower Birks (Saturday), an area immortalised in the Robert Burns song, 'The Birks of Aberfeldy'. The Aberfeldy memorial was also different from the conventional style, instead taking the form of a large, red sandstone arch. As well as commemorating the 65 men who fell in World War I the arch features Targes with crossed swords at each top corner. Perth & Kinross Council who own the space are currently undertaking a project to improve areas for its many visitors.

In some cases, the monies raised by local subscription fell short of the cost needed to install a conventional memorial and so land was instead obtained in memory of those who fell. This was the case in Polegate in East Sussex where the five acres which forms the War Memorial Recreation Ground (Friday) was purchased by three local men in 1922 and gifted to the Town Council in 1926. Despite there being no formal memorial a granite plinth next to the site's entrance notes its significance in memory of the 33 local men who fell in World War I.

The dedication of land as places of remembrance is also taking place as part of the centenary commemorations, as is the case with two of this week's featured spaces. The new bowling green at St Lawrence Recreation Ground (Wednesday) in Staffordshire was created to meet a local need and the decision was taken to protect it as a Centenary Field to link the space with the town of Biddulph's war memorial, which is located in the adjacent churchyard. In Barmby Moor in the East Riding the local play area (Thursday) contains a memorial seat and has been protected to mark the village being the location of an emergency landing ground for the home defence squadron during World War I.

The week concluded across the Pennines in Ashton-under-Lyne with the town's Memorial Gardens (Sunday). It was on this day in 1922 that the memorial was unveiled in front of some 22,000 people by General Sir Ian Hamilton. The names of 1,514 local men who fell during World War I are recorded on bronze panels fixed to the impressive Grade II Listed memorial.

Whilst some links to remembrance and memorial are more tangible than others, the variety of spaces and stories featured during this week of Centenary Fields Legacy demonstrates the many different ways remembrance happens across the country at all times of year, not just at 11am on 11th November.

Next week the Centenary Fields Legacy campaign moves into the second of our special themed weeks, where we'll be featuring seven spaces with connections to individuals who served during the Great War. Don't forget to visit our interactive online map at 11am each day to discover the story of the latest featured space and explore those already showcased. You can also learn more about the Centenary Fields programme and The Royal British Legion's "Thank You" campaign as well as find out how you can get involved.

Week Five:
A round-up of the seven spaces featuring during the fifth week of Centenary Fields Legacy

Week Four:
Take a look back on the spaces featured in the fourth week of Centenary Fields Legacy