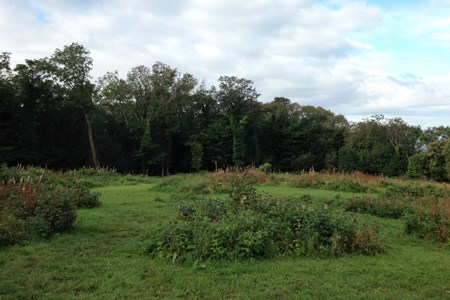 As our Centenary Fields Legacy campaign moves into its final month, this week all the spaces featured served the ongoing war effort by a variety of means.

At this time 100 years ago, the war had been raging for over four years and its effects were beginning to be seen in far-reaching ways across British society. It was this week in 1918, however, that the first clear signals the end might be in sight began to emerge.

The Hundred Days Offensive had already been successful in breaking through parts of the Hindenburg Line but on 8th, 9th and 10th September the First, Third and Fourth Armies of the British Empire broke through the Line again at the Second Battle of Cambrai. The already weakened German defences were unprepared for the advance of 324 British tanks supported by infantry and aircraft, allowing the Allies to quickly capture the town of Cambrai with few casualties.

It was this defeat that convinced the German High Command they needed to end the war and also led the Allied leaders to believe an armistice could be achieved in 1918, whereas previous efforts had been focussed on ending the conflict in 1919.

Whilst the conflict was nearly at an end and hadn't been fought on British soil, it had still been one of attrition which had touched all corners of the UK in its requirement for men and resources.

It is estimated that around 70 million military personnel in total were mobilised during World War I. Open green spaces became very important for many aspects of the military operation and it is on this theme that Centenary Fields Legacy started the week with Bulwell Forest Recreation Ground (Monday). Part of the space is known as Soldiers Hill due to its role as a recruiting base early in the war. The first of the 322 men from Bulwell who joined up were recruited within two months of the outbreak, on 26th September 1914, and were subsequently trained at Soldiers Hill.

Also used as a training ground was The Batters (Wednesday) in Corsham. This space was home to the Scots Guards in 1915 at the invitation of Lord Methuen, their Colonel in Chief and the owner of Corsham Court. They used The Batters before leaving for the Front as a trench-digging and shooting practice ground. A newspaper report of the time reported they had "transformed The Batters near the railway line into a miniature Front with trenches, dugouts, redoubts, etc, and carried out many interesting night attacks".

Spaces weren't just used in preparation for deployment to the Front, however, with what is now Crow Wood Park (Friday) located on the site of the old Crow Wood House. The building was a temporary hospital for convalescing soldiers between 1917 and 1920; when it closed the land was purchased by the local Council, with support from public donations. The House was demolished and park created as a memorial to those from Sowerby Bridge who fought and fell during the war.

It wasn't just the soldiers who went to the Front who used green spaces during the war, however. Rilshaw Meadows (Sunday) in Winsford was used to breed horses which were sent to France, and the land was also used for recreation by returning soldiers after the Armistice.

The natural environment was also an important contributor of resources to the war effort and one of the most important for trench warfare was the wood to build and shore-up the excavations. Weston Woods (Tuesday) in Weston-Super-Mare saw 80% of its pre-war trees felled to be sent to France whilst Old Rec (Thursday) in Langley Park was clear-felled to provide the vital timber. After the war, this latter space was gifted to local residents for recreational purposes in recognition of losses suffered by the community.

It wasn't just on the Front Line where resources were in need either, with food shortages back home becoming an issue as the war progressed. In 1914 Britain imported more than 60% of its food and wheat and many farmers had switched to more profitable commodities such as dairy and meat. Commercial shipping was targeted by German submarines, however, leading to food shortages and rising prices. With the land workers and horses away at war, a campaign was started to encourage those not fighting abroad to grow their own fruit and vegetables. It was for this reason that local landowner Henry Gribble Turner gifted Frieze Hill Community Orchard (Saturday) to the people of Taunton as a place for them to grown their own produce. Today it is a thriving orchard containing more than 120 fruit trees planted by the community.

With the centenary of the Armistice drawing closer, next week sees the Centenary Fields Legacy campaign tell the stories of seven more spaces across the UK protected forever in memory of those who lost their lives in World War I. Don't forget to visit our interactive online map at 11 am each day to discover the story of the latest featured space and explore those already showcased. You can also learn more about the Centenary Fields programme and The Royal British Legion's "Thank You" campaign as well as find out how you can get involved.

Week Nine:
All the stories from the ninth week of the Centenary Fields Legacy campaign