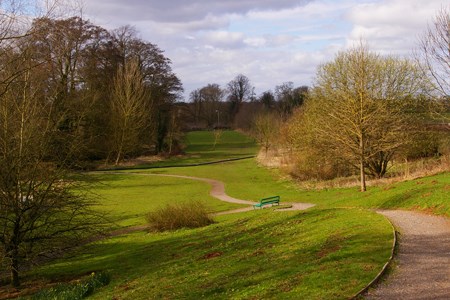 Whilst many parks and green spaces with links to World War I have physical memorials which were installed in the years following the cessation of conflict there can be many other ways a space can have a relevance to remembrance and the Great War. Throughout the third week of our Centenary Fields Legacy campaign we've been featuring spaces which each have contemporary links to World War I, many of which have been implemented as a result of the centenary commemorations being led by The Royal British Legion, our partners on Centenary Fields.

The week started with Centenary Park (Monday) in Rugby which, far from having a war memorial added immediately after World War I wasn't even a green space available for the community. The park was newly created and opened as recently as 2015 on the site of old allotments. The name, Centenary Park, isn't a coincidence of it having opened during the centenary commemorations and was chosen by local school children from Newbold Riverside Academy for that very reason.

The Centenary Fields plaque is located in a small memorial garden area, but the new park also includes a wide range of facilities for the entire community from a MUGA to butterfly bank to picnic area. It was the subject of research by Fields in Trust in 2016 into the impact on the local population of the creation of a new park. Our findings showed the park resulted in local residents feeling healthier, happier and becoming more active. This indicates the wider value of parks, beyond leisure and recreation. The development of the park into being an important local asset was demonstrated earlier this month with two community events at which the space's protection and perpetuity and inclusion in the Centenary Fields Legacy campaign were showcased. 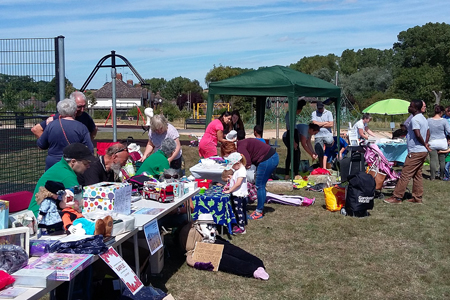 Likewise, the community of Cumbernauld in North Lanarkshire gained a new green space as part of the centenary commemorations with the establishment of Cumbernauld Community Memorial Peace Gardens (Wednesday) in 2014. The gardens sit on previously overgrown land which was made available to local organisations, led by the Cumbernauld Environmental Society, to transform into a tranquil space for remembrance. The garden is laid out in a poppy formation with each petal named after a significant battle in World War I.

Just as important to the local community is The Green (Sunday) in Tuddenham St Mary in Suffolk. Unlike in Rugby and Cumbernauld this is far from a new space, but until 2014 the community it serves had no memorial to the 11 men from the village who lost their lives during World War I. Local fundraising efforts saw £2,500 raised towards a new memorial which is now located on the space along with remembrance trees and a memorial to members of the local 90th Squadron.

Remembrance trees have been a theme of the centenary commemorations for many, with this planting of new life juxtaposing the losses of 100 years prior. Marshalls Park (Tuesday) in Braintree is located opposite Braintree Cemetery, which contains a number of graves from soldiers who either succumbed to their injuries after having returned from the battlefields or were killed in training exercises. In 2015 five lime trees were planted in the park, each one representing remembrance, renewal, reflection, respect and resilience.

Similar commemorative efforts were pursued at St Cuthbert's Meadow (Friday) in Shropshire where a commemorative tree was planted in 2014. Trees were also planted at Bentley Road Memorial Park (Thursday) in Leicestershire in 1995 before more recently a piece of returned sandstone from the castle of Castle Donington was added to the space to enhance it as a memorial area.

This demonstrates that remembrance isn't just the war memorials that were installed 100 years ago and indeed the memorial at Seaview Park (Saturday) in Llantwit Major takes the form of gates to the park. These were commissioned after World War II to remember those who lost their lives in both conflicts and were constructed by local RAF station, St Athan. They sat in storage until they were erected at Seaview Park in 1977 and to mark the centenary commemorations were restored in 2014.

As The Royal British Legion's Thank You campaign continues these seven examples demonstrate that remembrance can take many forms and remains as important now as ever. The centenary of the conclusion of World War I is an opportunity many are taking to say thank you to those who gave their tomorrow 100 years ago.

The Centenary Fields Legacy campaign continues next week with another seven spaces with unique links to World War I. Don't forget to visit our interactive online map at 11am each day to discover the story of the latest featured space and explore those already showcased. You can also learn more about the Centenary Fields programme and The Royal British Legion's 'Thank You' campaign as well as find out how you can get involved.

Week Two:
Our round-up of all the spaces featured during the second week of Centenary Fields Legacy

Week One:
A look back on the spaces featured during the first week of Centenary Fields Legacy