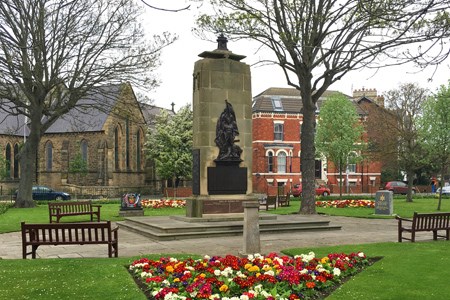 Last week Fields in Trust launched our Centenary Fields Legacy campaign where, in collaboration with The Royal British Legion's "Thank You" project, each day we'll be featuring one space protected as part of the Centenary Fields programme in memory of those who lost their lives during World War I.

The first week included spaces from across the four home nations with links from during World War I, immediately after the conflict and in more recent times . During the second week we have focussed in on the years which immediately followed the conclusion of conflict and the local efforts to remember those who fell.

In the absence of a personal grave, public subscription funded many war memorials where names of the fallen could be listed. Bridlington on Yorkshire's coast was one such place where this took place. A design competition for their memorial attracted over 80 entries and the completed cenotaph was unveiled as part of Wellington Road Gardens (Monday) in July 1921. An appeal in the local paper identified names of the fallen which were included on the memorial with a further 30 names added in 1922 once they came to light.

It was a similar story in Old Coulsdon in south London where a war memorial was added to the edge of Grange Park (Sunday). Taking the form of a simple wayside cross, panels at the base of the memorial list names of the fallen from the area. To mark the centenary of the end of World War I and their inclusion in the Centenary Fields Legacy campaign a Walk of Thanks took place around the park.

Windmill Hill Gardens (Tuesday) in Gravesend, Kent, was another space which saw a war memorial added in the years which immediately followed the armistice. The impressive structure is topped by a figure of winged victory holding a laurel wreath. Small granite stones nearby mark the sites of the first bombs dropped on Gravesend by a German Zeppelin in 1915 whilst the war memorial itself was damaged by enemy bombing during World War II and subsequently re-erected.

The memorial itself at Windmill Hill Gardens was dedicated by General Lord Horne, the only British artillery officer to command an army during World War I, and another of this week's spaces has a link to a commanding officer from the war. Hamilton Gault Park (Saturday) in Taunton is named for Brigadier Andrew Hamilton Gault, who gifted the park to the town's people in 1931 during his time as MP for Taunton.

Brigadier Gault founded the last privately raised regiment in the British Empire, the Princess Patricia's Canadian Light Infantry, at Lansdowne Park in Ottawa in 1914. A sandstone slab memorial now sits in that park to mark this event. Brigadier Gault was injured at the Second Battle of Ypres and later at the Battle of Mont Sorrel but returned to France and commanded the Patricia's until demobilisation. The final three of this week's featured spaces were themselves opened in memory of the fallen from World War I and have had physical memorials added subsequently.

A peace fund organised by Caincross Parish Council in 1920 raised the funds to purchase the land which formed Victory Park (Wednesday) with a victory parade marking its opening. The names of those fallen are listed on a plaque within the park and a peace garden established in 2016 commemorates the life of Eugene Paul Bennett VC MC.

Higher Memorial Park (Friday) in north east Manchester was similarly purchased by public donation in the years which followed World War I with its physical memorial added in 2015 in the form of a stone bearing a plaque.

Established most recently was Windlesham Field of Remembrance (Thursday) which opened in the 1950s after local residents came together to fundraise for an area of land to commemorate those who lost their lives from both World Wars. The space was extended in 1987 and a physical memorial to the fallen was later added.

These seven spaces form part of the continuing legacy being left by the Centenary Fields programme and are protected in perpetuity with Fields in Trust. As demonstrated their stories continue to be written, also the case for one of the spaces featured during the first week of Centenary Fields Legacy - Bentra Golf Course. The space was the site of Whitehead Aerodrome and home to airships during World War I. On Friday field research took place at the space using field walking, GPS and ground-penetrating radar in an attempt to find the location of the old 150ft long airship hangar and the pilots’ huts. Any findings will form part of an exhibition later this year at Carrickfergus Museum.

Casting ahead, the third week of Centenary Fields Legacy will see a specific focus on seven sites which have contemporary links to remembrance and World War I. Don't forget to visit our interactive online map at 11am each day to discover the story of the latest featured space and explore those already showcased. You can also learn more about the Centenary Fields programme and The Royal British Legion's 'Thank You' campaign as well as find out how you can get involved.

Week One:
A look back on the spaces featured during the first week of Centenary Fields Legacy