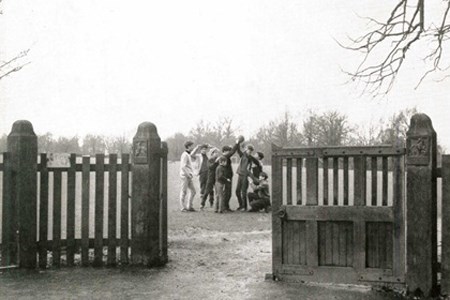 16th July marks the 80th anniversary of the legal protection of The King George V Playing Field at Sonning in Berkshire in 1938.

Sonning is identified as "the first field" in the final report of the King George V Fields Foundation. A contemporary newspaper report of the formal opening of the Sonning playing fields states: "General Maud congratulated Sonning on the most complete playing fields. It had been his pleasure to have associated with. There was room for everything in the field. Only one village out of 10 in England had a playing field and the streets were becoming more dangerous. It was essential that children should have places of safety in which to play ... Whilst these ceremonies were taking place a large group of children with happy and cheerful faces were amusing themselves on the swings and roundabouts in another part of the field."

The King George's Field Foundation committee passed on their custodian responsibilities for the playing fields to Fields in Trust (then NPFA) in 1965 ensuring that these 471 parks and green spaces established as a memorial to King George V would continue to be protected in perpetuity.

If you are interested in finding out more about this process or our rationale, please contact our Chief Executive, Helen Griffiths, on helen.griffiths@fieldsintrust.org.