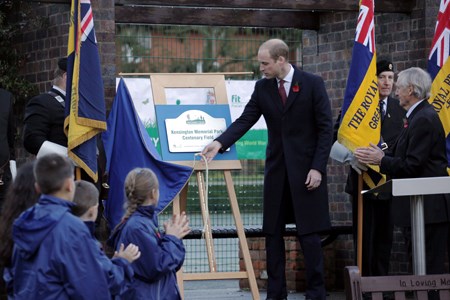 Today our Centenary Fields Legacy campaign reaches its mid-point by featuring Kensington Memorial Park. It was at this space two years ago that Fields in Trust's President, HRH The Duke of Cambridge, marked the half-way point in the World War I centenary commemorations by unveiling its Centenary Fields plaque.

Centenary Fields Legacy is telling the stories behind the protected spaces and showcasing the legacy being created by the programme. It is part of The Royal British Legion's movement to say 'Thank You' to the generation who served, sacrificed and changed our world. Our campaign started on 8th August, a century on from the start of the 100 Days Offensive which led to the Armistice, featuring the 48-hectare War Memorial Park in Coventry which was the first Centenary Field to be unveiled by The Duke in July 2014.

The Centenary Fields programme is working with The Royal British Legion to protect parks, playing fields and other recreational spaces in perpetuity to honour the memory of the millions who lost their lives in World War I. Spaces all across the country have already been protected as Centenary Fields with many more expected to be dedicated by the close of the programme.

Speaking at the War Memorial Park event in 2014, The Duke said: "I encourage local authorities to support this cause and to safeguard these living spaces of remembrance for many generations to come". So far 59 local authorities have answered that call as well as many more town and parish councils, sports clubs and other landowners.

The programme remains open for applications until 11th November and any publicly accessible green space with a tangible link to World War I is eligible to be nominated as a Centenary Field. If you know of a space near you which might be suitable then why not contact your local Councillor and encourage them to consider Fields in Trust protection.

Throughout its first 50 days the Centenary Fields Legacy campaign has featured protected spaces from all corners of the UK. Many feature physical memorials to the fallen which were added in the years immediately following the Armistice. Others have more contemporary links to remembrance including memorials added in recent years where none had previously been present. Some of the spaces originally served the war effort either directly by providing materials or indirectly as muster points or training grounds. Yet more have links to individuals who served during the conflict and many are now home to Victoria Cross commemorative paving stones.

Spaces have also been marking remembrance as part of Centenary Fields Legacy over the last 50 days in their own unique ways. These include a Walk of Thanks at Grange Park in Old Coulsdon (Sunday 19th August), to the reveal of a half-size prototype of a new installation called 'Sacrifice' at Belper Memorial Gardens in Derbyshire (Monday 10th September) and the unveiling a new Victoria Cross paving stone in memory of Frederick Birks at Coronation Gardens in Buckley (Friday 21st September).

Yesterday an event in Didcot saw Smallbone Recreation Ground dedicated as the latest protected Centenary Field. The plaque was unveiled by Mrs Elizabeth Paris, the Deputy Lord Lieutenant of Oxfordshire, wreaths were laid by Councillor Bill Service, Mayor of Didcot, and Lt Col Neil Joynes QGM of the Royal Logistics Corps and local school children placed 28 remembrance crosses, each bearing the name of one of the Didcot men who fell during World War I.

The featuring of Kensington Memorial Park at the half-way point of the Centenary Fields Legacy campaign also marks one month to go until the formal launch of The Royal British Legion's 2018 Poppy Appeal on Thursday 25th October. Over the time between now and the 100th anniversary of the Armistice on 11th November, Centenary Fields Legacy will continue to tell the stories of protected spaces with a new point on the map revealed at 11am each day.

With 50 spaces already having been featured there's lots of stories to discover on the interactive map - why not see if there is a Centenary Field near you with a history you weren't aware of?

You can also discover more about Fields in Trust protection, Centenary Fields and our Royal Patronage:

How to Protect:
Find out the protection process and about our Deed of Dedication

Royal Patrons:
We were established in 1925 by Royal Charter