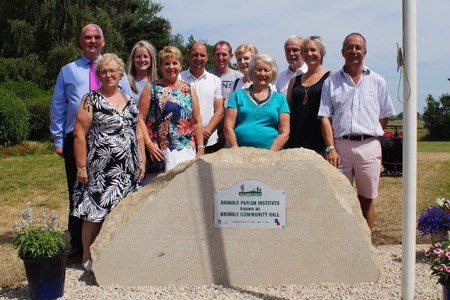 Brindle Community Hall and its surrounding recreational land became the fifth space protected in Lancashire as part of the Centenary Fields programme last weekend. An event was held at the hall to mark the dedication on Sunday 1st July with local MP and Deputy Speaker of the House of Commons, Sir Lindsay Hoyle, on hand to unveil the Centenary Fields plaque.

The current Brindle Community Hall stands on the site of the former 'Brindle Parish Institute', which was given to the village in the early 1920s by Lord Chesham, the Brindle Estate owner at the time. This was at the request of four returning veterans from World War I, which had claimed the lives of some 17 men from the village. They wanted a place for recreation and enjoyment where they could put behind them the horrors of the war and 'fraternise as they had done in the trenches'.

Sunday's event saw music played by a local brass group, a display of historical photographs and records and light refreshments served. The space was recently protected under the Centenary Fields programme meaning it will remain a place for recreation for the community in perpetuity. The plaque, close to the hall and entrance to the green space has been mounted on a large boulder from the local Brinscall quarry, less than five miles from the town.

Posting on Twitter after the unveiling event, Sir Lindsay Hoyle MP said: "Proud to unveil @FieldsInTrust plaque this morning @BrindleHall remembering those who lost their lives in #WW1 and protecting the site for the future."

Proud to unveil @FieldsInTrust plaque this morning @BrindleHall remembering those who lost their lives in #WW1 and protecting the site for the future pic.twitter.com/XkWj0NCQpi

Ashton Memorial Gardens are located close to the centre of Ashton-under-Lyne and surround the town's war memorial, which was officially opened in 1922 with around 22,000 people in attendance. The memorial includes 38 bronze panels bearing the names of those who died in the Great War. Each is inscribed with about 40 names, a total of 1,512.

Great Harwood Memorial Park became a public park in July 1920 and the war memorial in the remembrance garden was unveiled on in October 1926. It remembers those from the area who fell during the Great War including many who formed part of the East Lancashire regiment.

Miss Whalley's Field it located to the north of Lancaster and was left in trust to the children of the city of Lancaster by a spinster, Miss Geraldine Whalley. She made this gift to commemorate the lives of her late father, Col. Joseph Lawson-Whalley and brother, Capt Julian Lawson-Whalley both of whom died in World War I.

Sough Park Memorial Gardens was officially opened as a memorial park in 1926 with the war memorial, now Grade II listed, first having been introduced in August 1921. The space honours the sacrifice of the people of Earby and the local area in the two World Wars.

The Centenary Fields programme is working in partnership with The Royal British Legion to protect parks, playing fields and other recreational spaces in perpetuity to honour the memory of the millions who lost their lives in World War I. The programme will close this November at the conclusion of the World War I centenary commemorations. If you think a park or green space near you would be a suitable Centenary Field please get in touch with the landowner, often the local council, to encourage them to protect it with Fields in Trust. You can find out more about the programme and read eligibility criteria.