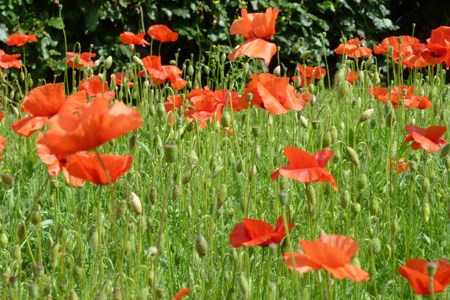 Today we begin our Centenary Fields Legacy campaign to mark the sacrifice of those who gave their lives during World War I and the legacy the Centenary Fields programme is creating. Fields in Trust Head of Programmes, Angela Lewis, discusses what will be happening over the coming weeks.

Wednesday 8th August marks the centenary of the start of the Allies' Hundred Days Offensive, which began with the Battle of Amiens. I wonder how ordinary people like us were feeling back in August 1918, in the midst of a conflict that had been raging for four years? There were reports from the Western Front in the papers but it was obviously a world away from 2018 when we have to make a real effort not to know what is going on 24 hours a day.

Did people feel the end of the War was in sight, or was it so long ago since the 'it'll be over by Christmas' sentiment back in 1914 that they didn't even dare to hope?

It is an appropriate time to reflect on the World War I generation as we approach the end of the commemoration period and here at Fields in Trust between now and 11th November we are telling the story of our Centenary Fields programme.

Since 2014, we have been working in partnership with The Royal British Legion and communities up and down the UK to protect parks and green spaces in perpetuity in honour of those who fought and lost their lives in World War I.

Each day, until 11th November, we will showcase one of the protected Centenary Fields on an online interactive map and tell its story, which will also be our contribution to The Royal British Legion's Thank You campaign – a national movement to say 'Thank You' to the entire generation who lived through the war, served, sacrificed and changed our world. Local communities will join in and express their gratitude too.

Stories that we will tell include the contribution of individual combatants, some famous names among them; the memorials that remember the fallen, from simple village stone crosses to more extravagant commemorative sculpture; the way in which sites served the war effort and also those green spaces with a contemporary resonance - communities doing something now to remember the sacrifice of 100 years ago.

And we should not forget the efforts that local communities made up and down the country after the war to create the memorials, whether it was people coming together to pay a subscription to install a memorial in a park or a bereaved relative gifting a park to their community in memory of a loved one who fell. One hundred years ago people would have taken for granted that the park or recreation ground would always be there, so we ask local authorities that have not yet been part of the Centenary Fields programme to join before it closes later this year. Protecting their memorial parks with Fields in Trust will ensure they are not lost and that they become part of the valuable legacy we are creating from the World War I commemorations.

The Centenary Fields programme publicly demonstrates our gratitude to the World War I generation in a unique way and the commitment of landowners across the country means that when the commemorations are over their local communities will always have somewhere for play, sport – or a quiet moment of reflection.

Explore the Centenary Fields Legacy and come back at 11am each day to discover the latest space featured.