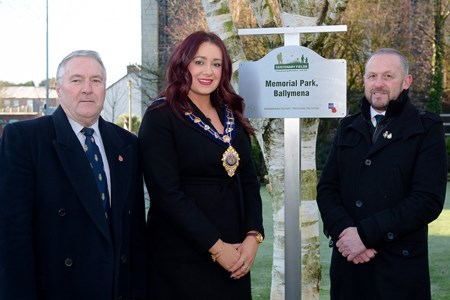 War Memorial Park in Ballymena has become the latest space in Mid and East Antrim to be protected in perpetuity with Fields in Trust. Nine parks and green spaces across the borough are now secured for future generations, making Mid and East Antrim Borough Council one of only two local authorities in Northern Ireland, along with Belfast City Council, to have participated in each of Fields in Trust's protection programmes.

The space, which is protected as part of the Centenary Fields programme, was gifted to the town in 1917 and was formally opened as a Memorial Park by Major-General Sir Oliver Nugent in November 1924. The park's war memorial lists the names of the 491 from Ballymena and surrounding areas who gave their lives during World War I. Located close to the centre of Ballymena it is a tranquil place for quiet reflection and remembrance for local residents.

A plaque marking the protection was unveiled by Mayor of Mid and East Antrim, Cllr. Lindsay Millar, as part of a recent dedication ceremony. Speaking after the event Mid and East Antrim Borough Council Director of Operations, Philip Thompson, said: "Protecting this park will not only leave a living remembrance, but it will provide the surrounding community with an invaluable green space which they can enjoy all year round. Mid and East Antrim Borough Council is committed to improving the quality of life for all the people of the borough through the services it provides. We appreciate the value that these community green spaces play in a vital role maintaining a high quality of life".

Ballymena's War Memorial Park is one of three spaces across the borough secured as Centenary Fields. Bentra Golf Course and Whitehead Diamond Jubilee Wood was protected early in the centenary commemorations and during World War I was site of Whitehead Aerodrome, the first military aviation facility in Ireland. Inver Gardens Memorial Park is home to Larne's war memorial which consists of a large cenotaph remembering the 147 from the town who gave their lives during World War I.

It is not just through the Centenary Fields programme that Mid and East Antrim Borough Council have been working to secure their parks and green spaces over recent years, however. The borough has benefitted from £40,000 of investment in three spaces as part of Fields in Trust's Active Spaces programme, funded by the London Marathon Charitable Trust.

As well as being protected in perpetuity, Dixon Park in Larne and Shaftesbury Park in Carrickfergus each received £5,000 through the programme to deliver activation sessions targeted at inactive groups within the local community.

The People's Park in Ballymena, located less than a mile from the War Memorial Park, is the third space in Mid and East Antrim protected as part of Active Spaces and in addition to their £5,000 activation grant, which has funded "Spring in to Summer" activity sessions for the community, has received £25,000 in capital funding to improve already popular walking trails within the park and create a trim trail. The addition of outdoor fitness equipment manufactured from natural timber will ensure The People's Park retains its scenic environment along the paths and trails amongst the most beautiful areas of the park.

Fields in Trust's work in Mid and East Antrim dates back to 1940 when green space off Larne Road in the south of Ballymena was laid out as a King George V Playing Field. More recently Sandy Bay Playing Fields in Larne and Eden Playing Fields were protected as part of the Queen Elizabeth II Fields programme.

Earlier this month we marked 90 years protecting, supporting and championing green spaces for good within Northern Ireland. Across the province Fields in Trust protect 29 parks and green spaces in perpetuity, including the football pitch where George Best first kicked a ball as a young boy.

Green Spaces for Good: Green spaces are good, do good and need to be protected for good

Have a Field Day: Host a party or a picnic in your park this July