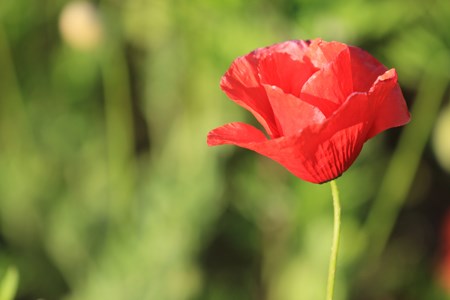 As we approach the centenary of the Armistice, in our latest staff blog our Head of Programmes, Angela Lewis, discusses the Centenary Fields programme and the importance of ensuring our memorial spaces remain protected in perpetuity.

Today is the start of the 2018 Poppy Appeal, run by The Royal British Legion, Fields in Trust's partner in the Centenary Fields programme.

Since 2014, we have been working in partnership with communities across the UK to protect parks and green spaces in perpetuity in honour of those who fought and lost their lives in World War I.

This year's remembrance period, centred around the poppy, is of great significance, marking the 100th year since the end of the War.

Fields in Trust has been working to protect parks and green spaces for almost as long, having been founded in 1925 by King George V. Following the end of the Great War, green spaces were created and bought in memory of those who gave their lives and at the time it would have been inconceivable to those communities that one day their memorial green space would be built on.

Sadly, there are examples of where exactly that has happened, one of which is a green space that was dedicated to the World War I poet Wilfred Owen. Ingleborough Road Memorial Playing Fields in Birkenhead, Merseyside, was covenanted land to commemorate the 88 old boys of Birkenhead Institute Grammar School who had made the ultimate sacrifice, including Lieutenant Owen.

The playing fields were a community facility until 1995 when they were sold to Tranmere Rovers Football Club. It was the club's training ground for several years until they launched a bid to sell the land in a deal worth around £5 million. Despite strong opposition, Wirral Council removed the "protective" covenant and the memorial playing fields are now a 90-home estate. Once a green space is lost, the one thing it will never be again is a green space.

So, war memorial spaces are not sacrosanct, as you might think, nor are covenants a cast-iron means of protection. 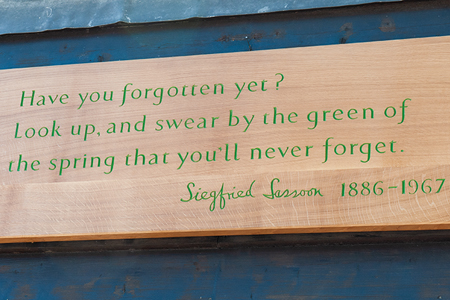 Unlike Wilfred Owen's school, Brenchley Memorial Fields - a space associated with another World War I poet, Siegfried Sassoon - have been secured. Sassoon was a serving soldier, decorated with the Military Cross for bravery. As a boy he had enjoyed cricket and he aspired to play for Brenchley. His memories of the cricket field are immortalised in his writing. In July this year the Memorial Fields were protected in perpetuity as part of the Centenary Fields programme. During a World War I commemorative weekend a woodcarving of a quotation from Sassoon's Aftermath (pictured) was unveiled, along with an evocative pedestrian gateway.

Protecting memorial parks and green spaces with Fields in Trust will ensure they are not lost and that they become part of the valuable legacy we are creating from the World War I commemorations. For this reason, we are calling on local authorities that have not yet been part of the Centenary Fields programme to join before it closes later this year and save these precious green spaces.

To find out more about the range of green spaces we are protecting, explore the Centenary Fields Legacy and come back at 11am each day to discover the latest space featured.

And if you would like to help us continue our work to protect valuable parks and green spaces, do please consider a small donation. As a comparison, a donation £3 would have covered the cost of a month's worth of tea for an army battalion at 1918 prices – please text CFLF18 £3 to 70070 to donate to Fields in Trust and make a difference today.