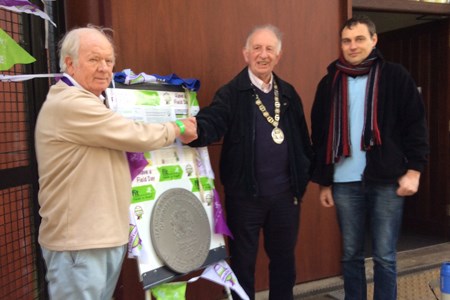 Parks and green spaces often provide the location for community events and activities, but behind each of these gatherings are a dedicated and enthusiastic set of volunteers. This week, as we look at informal communities in parks and green spaces, we want to focus on one such champion who has dedicated himself to bringing people together: Norman McCarley from the Friends of Brynmill Park in Swansea.

Steeped in local history, Brynmill Park was developed from land surrounding a reservoir that was created in the 19th century to supply clean water to Swansea. From the outset in the 1840s this land was used informally for picnicking by local people in the surrounding communities. It was developed as a park with construction beginning in the 1870s and soon became Swansea's first formal public park.

Around a century ago the park was developed as a visitor attraction including the introduction of a public glasshouse menagerie with a variety of animals from monkeys to guinea pigs and birds from parakeets to golden pheasants. The remnants of the reservoir were used for fishing and boat trips. So, for well over 100 years, Brynmill Park has been a place for families, friends and neighbours to meet, play and enjoy each other's company.

The park has a Grade II Cadw (the Welsh Government's historic environment service) listing on the Register of Parks and Gardens of Historic Interest. Heritage Lottery grant funding recognised this special status and enabled the park to be lovingly restored after some significant decline and disrepair during the 1990s and early years of new millennium. Initially the Friends of Brynmill Park formed as a pressure group concerned about the long-term maintenance of the park. The group then worked in partnership with the City and County of Swansea Council to support the Heritage Lottery funding application. But there were complications along the way. Norman remembers one freezing-cold snowy Swansea night at a late meeting in the Guildhall where he learned that an underground drainage system had collapsed and needed additional work and money to repair, but determination and persistence paid off and the extra funding was secured to upgrade the park.

Refurbishment in 2007 included building the Discovery Centre which provides a focus for events, not only an educational facility for interpreting the habitats and history within the park, but also a base for local organisations. It has been put to good use by the Friends of Brynmill Park as a venue for their dynamic calendar of community events and activities.

Thanks in large part to the efforts of Norman, Brynmill Park is now protected in perpetuity with Fields in Trust as a Queen Elizabeth II Field. His determined efforts helped to secure the park's future from any threat of development following the significant Heritage Lottery investment into the park Throughout the process, Norman worked very closely with the City and County of Swansea Council parks team and legal department. He recalls: "The legal officer working on it called and said, 'I have something I need to tell you - can we meet?' I was worried it was bad news but when we met she showed me the signed deed and said the park was now legally protected she said, 'It was a wonderful journey and without you the park would not be protected with Fields in Trust.' I was over the moon". 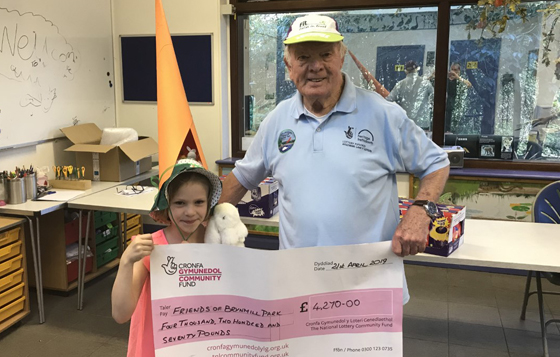 Now the park is well-cared for by the council and the Friends group who organise a whole series of events and activities – the season starts with an enormous 'Easter Egg Hunt' (this year Norman had to find 600 Easter eggs to meet the demand!) and at the end of June a 'Family Fun Day' will see the park full of local people enjoying music, games and meeting neighbours and friends. Later in the summer, 'Poetry in the Park' celebrates local creative talents and the year ends with a festive carol concert; last Christmas around 2,000 people attended. Each of these events provide a positive opportunity for local people to enjoy the park and meet their neighbours.

In 2013 Norman helped the Mayor to unveil a plaque, erected in the park to commemorate the protection. He says: "The park will always be here for people to enjoy in whatever way they like. The journey never finishes; I say to the people of Brynmill and the people of Swansea – it's your park now, it's your park forever".

There is no doubt that Norman's persistence has made a difference to the people in the communities who live around Brymill Park: more children from local schools now use the park than ever before and local businesses are more committed to supporting the fundraising efforts of the Friends group, knowing that the park will always be available for future generations to enjoy.

Whilst Norman is primarily concerned with Brynmill Park, he also keeps watch on other parks and green spaces across Swansea, for example he recently successfully campaigned for more grass mowing at Cockett Woods Park. Manager of Fields in Trust Cymru, Rhodri Edwards, adds: "Norman is constantly on guard making sure that Brynmill Park and other parks too are protected and maintained appropriately for the benefit of the public. Nothing happens at Brynmill without Norman knowing about it and he calls me on a regular basis to let me know what is happening. Norman is incredibly resourceful too securing hundreds of Easter Eggs, for example, from local supermarkets for their annual Easter Egg Hunt. We really appreciate all that he does for parks in Swansea".

Norman has enjoyed parks and green spaces all his life – as a young man he spent hours playing football on the same pitch as "Gentle Giant" John Charles and his brother Mel in Cwmbwrla Park in Swansea, which is protected with Fields in Trust as a King George V Playing Field. This is where he learned the value of parks as places to make friends, play sport and develop as part of a local community. But Norman is not resting on his laurels – he remains an enthusiastic green space campaigner. As he enters his eighty-fifth year Norman's message is steadfast: "I want every park in Swansea to be protected before I run out of steam".