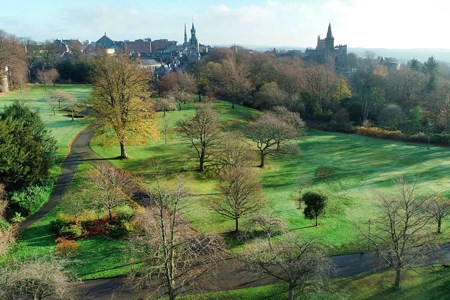 Known locally as 'The Glen', Pittencrieff Park is located on the western side of Dunfermline and just a short journey from the famous Forth road and rail bridge crossings. The space, which was given to the people of Dunfermline in 1903 is the winner of Scotland's Best Park 2019.

The park is home to Pittencrieff House, which was originally built in the 15th century by the Wemyss family. The House and its extensive grounds remained in private ownership until 1902 when the famous industrialist and philanthropist, Andrew Carnegie, who was born in Dunfermline in 1835 and whose statue stands within the park, purchased the space. It was formally gifted to the people of the town in a ceremony the following year.

The House itself was developed into a museum and today tells the story of the formation of the park as well as holding a collection of natural history artefacts. Equally noteworthy, however, is the park's glasshouse which was built in 1973 on the former site of conservatories. It holds a range of exotic and tropical plants as well as supporting the extensive formal gardens that the space is home to.

For those wishing to explore further there is plenty to find, as explained by the park's nominator for UK's Best Park 2019, who described it was having: "A variety of well managed facilities from kids areas to Glasshouses, peacock sanctuary and historical features with accessibility and educational inclusions. Rocky waterfalls, imaginative paths, well stocked, neatly trimmed flower beds and herb gardens. Much used by and part of the whole local community. We love our Glen!"

Paths extend across the park leading to rubbings trails, tree trails and plenty of historical features which offer something for everyone, supported by three play areas across the space.

The park is also home to an active Friends of Pittencrieff Park who were founded over a decade ago and meet regularly within the glassroom. Their work focusses on the play areas, orchard, kitchen garden and welfare of the park's peacocks as well as organising events.

"Much used by and part of the whole local community. We love our Glen!"
Nomination for UK's Best Park 2019 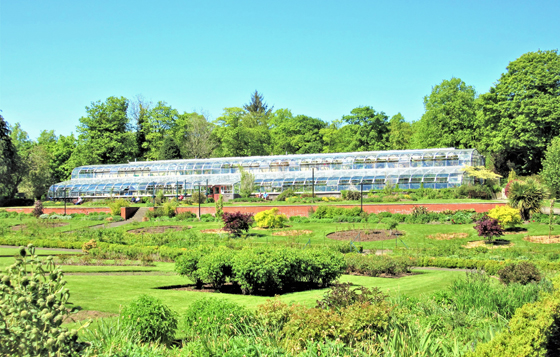 Supporting Pittencrieff Park in the award was local MP, Douglas Chapman, who urged his constituents to vote for the space, writing in an article on his website: "Pittencrieff Park - or the Glen as it is known locally - is a fantastic asset to the town. I would urge all residents to get online and vote for the Glen to recognise it as the beautiful green space that it is. Some incredible work goes on to keep the park clean and looking magnificent and showing support is also a chance to recognise the great work that goes on to keep it as the gem that it is".

Having visited the space during the voting phase, the MP tweeted his congratulations after it was named Scotland's Best Park 2019.

I am absolutely thrilled at the news and hope it can go on to take the crown of the best park in the UK! pic.twitter.com/UV1q0yaCbp

Pittencrieff Park was one of 42 spaces in Scotland nominated for UK's Best Park 2019. Of those, eleven placed within the top 20% of nominations across the UK and received "Much Loved" status. Joining the national winner with this status were Aden Country Park in Mintlaw, Aberdeenshire, Barshaw Park in Paisley, Renfrewshire, Belleisle Park in Ayr, South Ayrshire, Chatelherault Country Park in Hamilton, South Lanarkshire, Figgate Park in Edinburgh, Glencoats Park in Paisley, Renfrewshire, Levengrove Park in Dumbarton, West Dumbartonshire, MacRosty Park in Crieff, Perth and Kinross, Pitlochry Recreation Ground in Pitlochry, Perth and Kinross and Wilton Lodge Park in Hawick, Scottish Borders. Each will receive a certificate denoting their "Much Loved" status.

Pittencrieff Park joins the other three Home Nation winners - Antrim Castle Gardens, Cyfarthfa Park in Merthyr Tydfil and Stanley Park in Blackpool - on the shortlist for UK's Best Park 2019. The overall winner will be announced on Thursday 12th September.