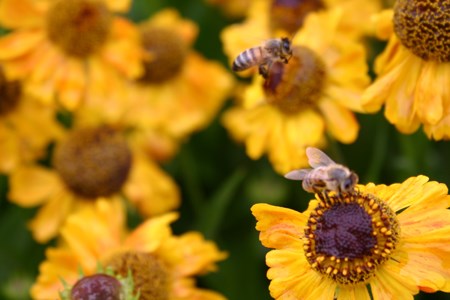 The Friends of Sandringham Park in Wetherby, West Yorkshire are a small group trying to make a big difference by improving their local green space.

Local resident Kazia Knight was instrumental in establishing the group in 2010 and continues to be the driving force behind the Friends of Sandringham Park as Chair. The group formed as a response to neglect of their park and an increase in anti-social behaviour. As Kazia recalls, "it was just an area that nobody cared about". However local residents wanted some action taken to reverse the decline of the park and Kazia continues "at each councillors meeting there were up to 40 people concerned about anti-social behaviour. So, instead of 40 different voices that were all being ignored, we decided to come together as a group, with one voice, and we formed the Friends of Sandringham Park".

A park for people

At first the Friends group were focussed on stopping anti-social behaviour so they set about clearing dumped rubbish and tidying-up the park. Kazia thought: "if people take a pride in where they live, they are less likely to throw rubbish away in the park, so we spent a whole day - about 100 bin-bags, a full skip - and the park was transformed". To keep the momentum going the Friends consulted with other local groups; young people and the local residents association and this intergenerational activity ensured all the people who used the park were able to have their say about its upkeep and development. But, as Kazia recalls, "at this stage nature wasn't in the picture... it was always about people".

This focus on people included tireless work to organise community events throughout the year including Big Lunch celebrations, the UK's annual get together for neighbours, and Fields in Trust's Have a Field Day, our UK-wide celebration of parks and green spaces on the first Saturday in July. For her work encouraging local people to meet their neighbours, connecting communities and helping reduce social isolation and loneliness Kazia Knight was recognised as a Fields in Trust Community Champion. The Friends of Sandringham Park, under Kazia's leadership, were instrumental in securing Fields in Trust protection for the park; it is now secured in perpetuity as a Queen Elizabeth II Field.

Once the park was clean, tidy and well used by local people Kazia began to think about the green space. She says: "There was one thing the park was missing - there were no flowers, nothing visually pleasing". The Friends group set about making little pocket gardens with a splash of welcoming colour near the park gates. Kazia continues the story: "after planting the first few beds it came onto our radar that there is a whole eco-system in the park - so we set about understanding what was already there and nurturing the nature and wildlife we found within the park. That's when we started to look at the insect and the frogs and the hedgehogs that were using the park, alongside the people, and our concern for the natural life in the park has grown enormously alongside our love for the pollinators and their importance to our planet".

"For children to get interested in nature they have to be able to look at things, smell the flowers... touch things."
Kazia Knight, Chair of the Friends of Sandringham Park 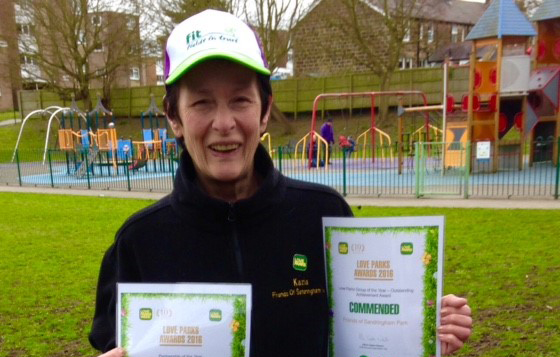 Kazia explains how a partnership with the Royal Horticultural Society helped them deepen their understanding of the amazing natural resource that Sandringham Park represented to all of it users - human or otherwise!

In a quieter section of the park a number of hedgehog habitats have been established in the undergrowth, along with bird nesting boxes and bat boxes in the trees. The hedgehog habitat is in a part of the park where child-scale "fairy house" models are located - encouraging the youngest children to look closely and explore their environment. These younger children always enjoy making "bug hotels" at workshop sessions, which provide a safe nesting place for insects, especially pollinators, and can deliver an urban solution to declining insect habitats.

Welcome to the Bee Bar

Last year saw a hive of activity with the creation of the innovative Sandringham Park "Bee Bar", a space within a small rockery designed to cater specifically for bees and other pollinators. Working with local scouts, the Friends group cleared brambles and nettles and planted up an area with wildflowers. A children's path has been created to allow youngsters to get up close. As Kazia suggests, "for children to get interested in nature they have to be able to look at things, smell the flowers... touch things".

The new area has made already made a difference: an annual bee census showed both that the overall number of bees has increased and there is also a greater variety of bees species due to the attention of the Friends group. The Friends were awarded a Green Flag "Bee's Needs" award in 2018 because of their pollinator friendly gardening.

Sources of support for nature gardening in parks

Kazia recommends that Friends groups should engage with environmental charities and government agencies to access information and materials which can help them enhance the natural habitats in local parks and green spaces.

Reflecting on the impact of the work the Friends have undertaken in Sandringham Park, Kazia says: "The education has been important, not just with children, but with their families and local people who have learned how they can help pollinators simply by having a window box. We know that we have increased the number and the variety of insects in the park. Our small-scale efforts have had an impact on biodiversity: what could we achieve if all our parks used a bee friendly approach".