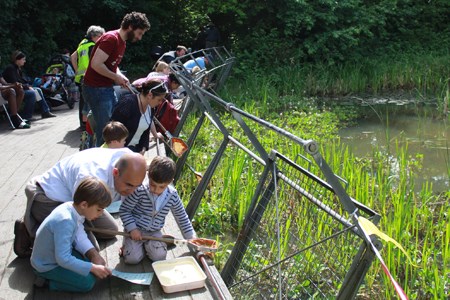 "Buy land," said author Mark Twain "...they are not making it anymore". Whilst this is of course true there are some occasions where land can be re-purposed in a way that makes it unrecognisable from its former function. With London now the world's first National Park City, we take a look at some parks and green spaces which, in former incarnations, were part of the railway network but now, with a little care and support, have been rewilded as spaces where visitors can let off steam, engage with nature and find a little tranquillity to keep them on track - away from the noise of the city.

One of the Islington parks making the most of the borough's limited space is Gillespie Park. Nestled between Arsenal's Emirates Football Stadium and the busy transport hub of Finsbury Park, where rail, tube, buses and cycle lanes converge, Gillespie Park is a 2.8 hectare space - about the size of four pitches like those at the Emirates. Established as a mature nature reserve, Gillespie Park has been protected with Fields in Trust as a Queen Elizabeth II Field since 2011. Overall 244 plant species, 94 bird species and 24 types of butterfly have been spotted on the site.

The park occupies former coal depot sidings constructed in the second half of the 19th Century, adjacent to a Victorian ink factory called Stephens, which closed in the 1960's to be replaced by a council housing estate in 1972. The railway sidings were derelict until, in 1980, the idea for a park on the area was proposed by local people, at the same time as Arsenal also wanted the land for car-parking. A successful community campaign put pressure on the council to make the space publicly available and in 1981, Islington secured a ten-year lease from British Rail. Landscaping work over three acres of the space improved the contaminated soil and constructed a large pond - although much of the space was left unmanaged.

In the late 1980s, before the expiry of the ten-year lease, there was pressure from central government and the Department of the Environment to sell as much publicly owned land as possible and generate as much capital as could be realised. British Rail was pressurised to sell the land to the highest bidder. When the future of the park was in jeopardy, local people formed a campaign group to keep the park open despite pressure from some council leaders to use the space for housing.

A vigorous community campaign resulted in British Rail agreeing the sale of the freehold to the Council for use as parkland (the space being valued at approximately £8-10 million) on condition that housing association homes were built on part of the space as well as construction of an Ecology Centre, which was completed in 1992, as a teaching centre for schools and information centre for the general public. As part of the project the developers agreed to fund the extension of Parkland Walk which runs from Highgate to Finsbury Park and on to Gillespie Park.

The Parkland Walk follows the course of the old railway line that ran between Finsbury Park and Alexandra Palace. This four and a half mile long green corridor is London's longest Local Nature Reserve and one of three such designated sites in Haringey. It supports over two hundred species of wildflowers as well as hedgehogs, foxes, butterflies and many birds. This green space is not yet a protected with Fields in Trust, but we are in conversation with the London Borough of Haringey about several protections.

The southern end of the Walk falls within the large, Victorian-era Finsbury Park which has recently been re-landscaped as part of a £5 million National Lottery Heritage Fund supported restoration and improvement project. This has created an accessible walk to Stroud Green Road and the new cycle park facility located at the entrance of Finsbury Park. Linear green spaces in urban areas are valuable to connect areas of wildlife habitat, so that wild plants and animals can move between individual sites and they also provide pathways for pollinators. As well as establishing a space for nature in the densely populated area of north London, the Parkland Walk adds to the infrastructure for active travel, walking and cycling, connecting with a transport hub at Finsbury Park.

Located just off the major London thoroughfare Green Lanes is two-acres of the Green Flag award winning Railway Fields, which is also a designated Local Nature Reserve. In the 1950s the space was used as a railway goods yard and even today fragments of coal can still be found at the location. The council acquired the land in the early 1980s and in 1986 turned it into a wildlife haven and environmental teaching centre for local schools. In 1990 Railway Fields was officially declared a statutory Local Nature Reserve. It has been protected with Fields in Trust as a Queen Elizabeth II Field since 2014 and this delightful green space is currently managed by environmental charity The Conservation Volunteers (TCV). Railway Fields is renowned for its abundant flora including over 200 species of wildflowers.

Brunswick Park, another former railway site in the London Borough of Haringey is in the process of becoming protected with Fields in Trust. This small green space sits alongside Seven Sisters station and used to be part of the Palace Gates railway line which connected this area with Alexandra Palace. After recent improvements, the park is now equipped with a kickabout area, outdoor gym, playground, table tennis and a chess table. The relaunched park has been supported by an enthusiastic Friends of group who have organised several community events and have been planting fruit trees, willows and wildflowers within the park.

As the first city in the world to achieve the National Park City status, London is leading the way with aspirations for a healthier greener city involving communities in caring for their parks, each other and the nature around them. London continually comes under pressure for development of housing, roads and commercial premises, all of which threaten habitats and ecosystems, but as these north London examples show creative and innovative use of space can add to the green footprint of the capital and provide a platform for the natural world.