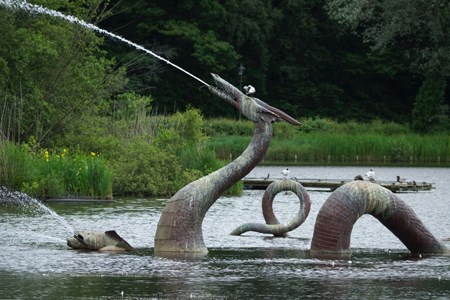 As Summer of Parks discusses the heritage and history of parks our latest guest blog welcomes Glynis Shaw, a Trustee of the Welsh Historic Gardens Trust, who takes us on a journey through the history of some notable urban parks and gives some tips on researching the history of your local park.

Park heritage is infinitely varied with historic buildings, landscape features, monuments, and sculpture, which combined with historic planting and mature trees contribute to the national identity and sense of place. Parks in Britain are rich in heritage - both as a product of history and as a venue where historic events have taken place or have been recorded.

Few parks can rival the rich heritage of London's Hyde Park from its from Saxon origins as the manor of Hyde, which by the Middle Ages had become part of the Westminster Abbey estate. Henry VIII first created a deer park on the site when he acquired the land from the monks in 1536, In 1625 James I allowed limited public access to the park but it was Charles I who granted public access in 1637. The park enjoyed today was largely landscaped in the 1730s when the Serpentine Lake and the fine avenues and trees were planted, including many elms, under the direction of Queen Caroline. Wellington Arch and the Screen Gate at Hyde Park Corner were added in the nineteenth century. The many monuments and sculptures are a significant heritage in their own right. This is combined with a rich botanic heritage of mature trees, including the weeping beech (the upside-down tree). Flowers were first introduced by William Nesfield in 1860 and this was followed by the Italian Water Garden at Victoria Gate, with fountains and a summer house and Christopher Wren's Queen Anne's Alcove was moved to Hyde Park from Kensington Gardens. The park has a rich social and political heritage with the Speakers Corner, and hosting of great events such as The Rolling Stones to Pink Floyd and Pavarotti!

The heritage of many parks enriches our urban experience as seen in these examples in Wales.

Bailey Hill Park in Mold was originally a motte and bailey of the late eleventh/early twelfth century of the Norman de Montalt family. After an early turbulent history, the Mostyn family acquired the redundant castle and created a pleasure ground on the site with woodland walks and granted public access. Lady Augusta Mostyn sold the site in 1870 to the Town Council for a public park. For many years the park was opened for a summer season on Whit Monday when several of the Friendly Societies held their anniversaries, and afterwards, they resorted to Bailey Hill, where dancing and other amusements were freely indulged in. Tennis courts and a bowling green were also laid out on the site providing further recreation. Restoration of this park is underway thanks to an energetic Friend's group and National Lottery Heritage Fund support.

The Grade II* Rock Park in Llandrindod Wells was designed in 1867 with the development of a flourishing spa town and is one of the earliest public parks in Wales. A natural rock outcrop known as Lover's Leap provides a viewing point above the river Ithon. In Roman times the area was known as Balnea Siluria (baths of the Silures), a Roman road runs through the park and a Roman well lies beneath the paved area in front of the Spa Buildings. JW Gibson-Watt of Doldowlod donated the salty Chalybeate Spring drinking fountain in 1879. The iron-rich water is good for treating gout, rheumatism and anaemia. A winding path through trees is part of the Victorian landscape design and a large area of native broadleaved mixed woodland along the steep banks of the River Ithon is a site of Special Scientific Interest.

The 13-acre lake was dug out from a peat bog to create a focal point and boating lake for the Pump House Hotel, once a fashionable place to stay whilst taking the waters. Today the lake is a habitat for wildlife with the 40 m long water dragon sculpture made by the local coppersmith Richard Taylor in 2005. 2,000 people contributed little scales which have messages inscribed on them to cover the beast. There are also sculptures of the Llandoddies, the Ancient Water Keepers, created by Michiel Blees and Griswallt ap Llechitwyt (David Bellamy) in The Chronicles of the Llandoddies. The Spa Buildings remain a striking example of late Victorian and Edwardian architecture. The bathhouse is now a complementary health centre and the pump room is a conference centre.

Roath Park was the first publicly owned park in Cardiff and was built on former bogland donated to the city by the Marquis of Bute and other landowners in 1887. The lake was developed to drain the site and a botanic garden was laid out before the park was officially opened in 1894. The wild garden was added in 1896 and the bandstand in in 1903. The Third Marquis employed Andrew Pettigrew as Head Gardener and he and his three sons developed and laid out the Cardiff parks with a rich horticultural heritage. Roath has one of the best tree collections in a public park. A rare Chinese tree, Emmenopterys Henryi, introduced by the Botanist Ernest in 1907, last summer flowered for the first time since it was planted more than 100 years ago. The deciduous tree has grown to be a champion- the biggest or best of its kind in the UK. The tree belongs to the Rubiaceae family and is found in southern China and Vietnam.

Even very small parks can have a significant heritage. In Denbigh, the Dr Evan Pierce Memorial Garden is but half an acre donated by the man himself. Dr Evan served as Councillor, Alderman and was five times the town Mayor. He was accorded the rare honour of having a statue erected during his lifetime to commemorate his heroism in a cholera epidemic. His statue is at the top of a 72ft. Tuscan column at the centre of the garden and was unveiled in 1876. Bronze relief panels recording Dr Evan's life were added in 1878. In front of the column are two fountains presented to Dr Pierce in 1887 to celebrate the Queen's Golden Jubilee.

Members of the Welsh Historic Gardens Trust recently explored some of the parks that were once the private gardens of entrepreneurs of the industrial revolution in south east Wales, which reflect the industrial heritage of the Valleys.

Cyfarthfa Castle built by William Crawshay II in 1824/5 has a landscape that combined ornamentation and utilitarianism. Four small balance ponds fed the large ornamental lake below the castle terrace, which was also a reservoir for the huge Crawshay ironworks on the other side of the valley. A leat took water from the lake to power machinery in the ironworks crossing the river in a trough over the Pont y Cafnau. Merthyr Tydfil Corporation bought the space in 1909 and the castle is now a museum and its landscape a public park.

Pontypool Park was once part of the grounds of Pontypool House designed at the end of the 17th century for Major John Hanbury, the local ironmaster, purchased in the 1920s to provide public open space. Many of the veteran sweet chestnuts, surrounding the Nant-y-Gollen Ponds were originally planted to produce charcoal for the iron forges along the Afon Lwyd. The Nant-y-Gollen Ponds were originally one large millpond used to power a forge downstream. Slag encrustations were used to decorate the shell grotto built in 1829 by Molly Mackworth as a summerhouse 220m above the surrounding area with stunning views across the Severn Estuary.

The Icehouse in the park at Cyfarthfa and an unusual double icehouse at Pontypool reflect the taste for extravagant dining of the industrialists who created these landscapes.

To discover your local park's unique heritage, check the first edition OS maps, which will show any features of the park. Local libraries and record offices may have descriptions of the park, particularly of when it was first opened to the public. Early drawings and photos may also survive.

If you are really lucky you may find a diary or report such as the "Cardiff Parks Superintendent's Reports January 1908-October 1912". This is a handwritten Report Book in which the Parks Superintendent, William Pettigrew, drafted his reports for the Cardiff Council Parks and Open Spaces Committee. Head Gardeners often kept meticulous accounts and these sometimes survive.

In 2001 the Urban Parks Forum determined that over 2,500 parks are of historic interest and represent 9% of the total number of open spaces and 32% of the total area.

Historically created to replicate the qualities of nature and enhance urban life. The heritage of parks is both an environmental and cultural asset in our cities.

Favourite childhood park: When I lived in Shenfield, Weald Park, near Brentwood was my favourite. I don't remember any play facilities but just loved the huge sense of space, the woodlands and lakes and feeling that you could roam anywhere. My brothers and I could play for hours in the woods...

Favourite local park: I live in a rural area of north Wales but I do like Happy Valley in Llandudno. There is a great effort to maintain interesting planting and there are great views above the pier. It is the oldest public park in the Conwy region. It stands in a sheltered fold of the land on the eastern slopes of the Great Orme, above Llandudno. The site was originally a quarry, but in 1887 Lord Mostyn donated the site to the town of Llandudno to celebrate Queen Victoria's Golden Jubilee. An ornate drinking fountain, decorated with a sculpture of The Queen marked the opening of the park. There is also an excellent ice cream parlour!

Favourite overseas park: Stanley Park in Vancouver. We have relatives in Vancouver and always visit Stanley Park. It is a great space for a city park - much of it is a beautiful natural environment and there is always a feeling of more to explore. The green spaces in Vancouver means that it is one of the continent's most beautiful cities.

Favourite thing to do at the park: I mainly love walking among really mature trees particularly in the autumn.

Glynis Shaw is a Lecturer in History of Art and contextual studies and photographer. As a volunteer, Glynis chairs the Clwyd branch of the Welsh Historic Gardens Trust, a national organisation campaigning to save historic gardens and parks from neglect, indifference, insensitive planning and planting, for future generations. Glynis is a Trustee of the WHGT and also edits the WHGT Bulletin magazine.