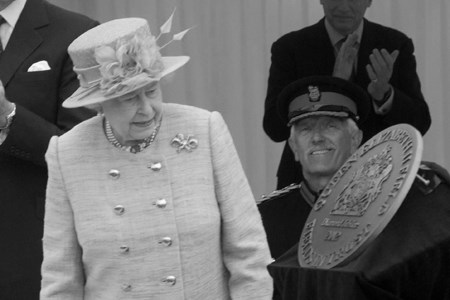 Fields in Trust are deeply saddened to learn of the passing of Her Majesty Queen Elizabeth II aged 96. Her Majesty served as our Patron for 70 years and we are extremely grateful for her decades of support.

The Queen took on the Patronage of the National Playing Fields Association, as Fields in Trust was then known, from her father, HM King George VI, in 1952 upon her accession to the throne. Between 2011 and 2016 some 1,388 parks and green spaces covering over 8,500 hectares across the UK were protected as Queen Elizabeth II Fields to mark the Diamond Jubilee.

Her Majesty was an active supporter of the work of Fields in Trust even before formally taking on the Patronage in 1952. The charity had been founded in 1925 by HM King George VI, who served as President and then Patron. The Presidency was accepted by her husband, His late Royal Highness The Duke of Edinburgh just a year after their marriage in 1947 and The Duke would take a hands-on and active role in the day-to-day activity of the organisation over 64 years of service.

The then Princess Elizabeth joined her husband in attending numerous fundraising events and field unveilings to support the work of Fields in Trust during the early years of his Presidency. In 1951 alone the Princess made several high-profile appearances in support of the charity. In May she attended a National Playing Fields Ball at Grosvenor House alongside her sister, Princess Margaret, which featured an indoor cricket match between the Lord's Taverners and a Rest of the World side. This was followed in December by attendance alongside her husband at a fundraising Gala Midnight Matinee at the London Coliseum, organised by The Duke, which also welcomed the likes of Noel Coward, Orson Welles and Frank Sinatra.

In the same year the Princess opened the new King George V Playing Field at Carnwadric in Glasgow, with a Japanese cherry tree planted inside the main gates to commemorate the opening. Glasgow City Council would go on to protect 26 green spaces across the city as Queen Elizabeth Fields in 2016 to mark Her Majesty's Diamond Jubilee and create a lasting legacy from the 2014 Commonwealth Games.

The Queen would continue to take an active role in the work of the charity after her accession to the throne in 1952, attending King George V Playing Field openings throughout the 1950s followed by further visits to protected green spaces across the decades since. Her Majesty's final engagement for Fields in Trust came in 2012 when she joined TRH The Duke and Duchess of Cambridge at Vernon Park in Nottingham to unveil a Queen Elizabeth II Fields plaque, celebrating the successful dedication of such spaces across the UK.

The Queen Elizabeth II Fields Challenge had been established in 2010 with HRH The Duke of Cambridge as its Patron and was the first charity to receive a grant from The Foundation of Prince William and Prince Harry. The Duke's Patronage was described as a personal tribute to The Queen to celebrate Her Majesty's then 60-year-reign, with the programme forming a key lasting legacy of the Diamond Jubilee celebrations.

Launching the programme in 2010, The Duke said: "The year 2012 marks the Queen's Diamond Jubilee, and I cannot think of a more fitting tribute to my Grandmother's 60 glorious years on The Throne than to dedicate to The Queen this programme that will save playing fields for future generations... I sincerely hope that these fields will become a living reminder to all of The Queen's steadfast duty, dedication and love for this country."

The 1,388 spaces protected as Queen Elizabeth II Fields (Queen Elizabeth Fields in Scotland) stretch the length and breadth of the UK, from the most northerly Gilbertson Park in Lerwick, Shetland to the most southerly Breage Playing Field in Helston on the tip of Cornwall. The 8,500 hectares of protected green space include everything from extensive country parks covering hundreds of hectares - Avon Heath Country Park in rural Dorset the largest at some 250 hectares - to small play areas of much less than a hectare - Islington Borough Council in inner London having protected twelve of their adventure playgrounds. Together, the 1,388 Queen Elizabeth II Fields create a lasting legacy of green spaces which will always be there for communities across the UK to use, enjoy and benefit from.

The efforts of Her late Majesty Queen Elizabeth II and His late Royal Highness The Duke of Edinburgh live on through these protected green spaces and Fields in Trust's continuing work - now supported by their grandson, HRH The Duke of Cambridge - to protect, support and champion green spaces for good.

A donation to Fields in Trust in memory of HM The Queen will support our ongoing work and help secure the green space legacy of Her late Majesty.