NATURE IN PARKS: Memories of discovering the natural world at the local park 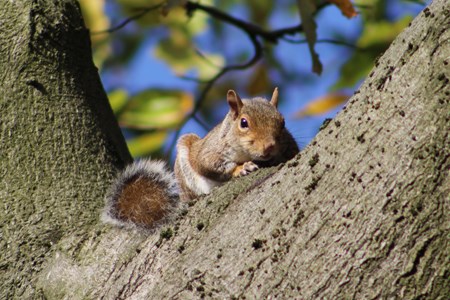 This week our Summer of Parks is discussing nature in parks and our latest staff blog comes from Terry Housden, Development Manager for the South of England and Northern Ireland, who shares his memories of how his local park helped him discover nature as a child.

We all benefit from being close to nature at all stages of life. An increasing number of studies find that there are mental and physical health benefits to spending time in the natural environment - a place of calm and relaxation in an ever more hectic world, where green replaces grey and birdsong replaces the hum of traffic.

Growing up in south-east London, I fondly recall as a youngster my weekly trip with my Grandmother to her local park in Peckham. Whilst that weekly outing was probably designed to provide respite for my parents from a tiresome toddler it served as the first introduction I had to exploring nature in what was and has since become an increasingly bustling and urban environment.

We lived in a flat and my grandparents' Victorian end of terrace had no front garden and a concrete back yard in which I don't remember seeing anything other than pigeons flying above. So, it was at the park where I have my first recollection of experiencing the wide variety of non-human lifeforms that shared the same city as me. Every week after running rampant around the play area it was time to find a spot by the pond to share a sandwich (the options were always ham, spam, cheese or jam) and I would curiously marvel at the ducks, ask endless questions about what birds and creatures lived up in the trees and what those little grey bushy-tailed animals were doing scampering around gathering nuts.

When you think of parks the first things that often come to mind are swings and roundabouts, football and cricket and flying kites. However, what I wasn't aware of then was that this wasn't just about a visit to the swings or kicking a ball (as much as I enjoyed both); it was my first experience of regularly interacting with wildlife. It was where I learned indicators of the changing seasons - the daffodils in spring, butterflies and bees in summer and the red and orange of the thinning tree canopies of autumn. It was a taste of the countryside in the middle of the city providing all of the emotional and physical experiences that nature has to offer and without it my childhood would have been all the poorer.

"It was a taste of the countryside in the middle of the city providing all of the emotional and physical experiences that nature has to offer and without it my childhood would have been all the poorer."
Terry Housden, Fields in Trust Development Manager for the South of England and Northern Ireland 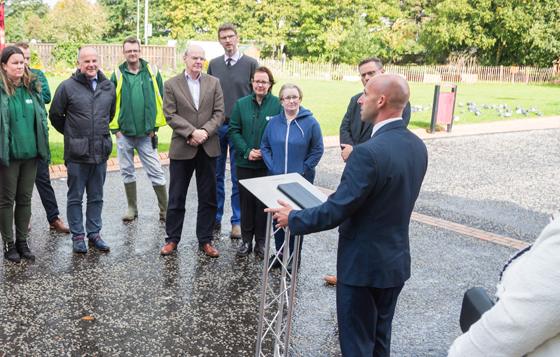 It is today estimated that approximately 90% of the UK population live in urban areas and whilst nature is all around us in various forms it sometimes seems to become less obvious. With the continuing levels of commercial and residential development changing both urban and rural environments our parks and community green spaces have an increasingly vital role to play in providing wildlife havens and sustaining the natural environment which supports so many aspects of human and other lifeforms. That park in Peckham was essential to my early learning and development. With Fields in Trust's Green Space Index finding that 2.6 million people in Great Britain live more than a ten-minute walk from a local green space it follows that the importance of protecting and investing in them has never been greater.

In my job, I have the pleasure of visiting all kinds of green spaces across the South of England and in Northern Ireland - all very different in size, type and location ranging from pocket parks in towns to destination parks in the countryside but there is a constant amongst them all - wildlife; and what continues to amaze me is how these spaces manage to strike a balance in accommodating the tranquillity of nature and the thrill of human sport and physical activities.

Now, some (ahem) 40 years later my visits to parks outside of work are no longer to play on the swings (as tempting as it can still be) but for a more relaxing experience - a walk with the dog, to clear my head and escape normal life for a while and reconnect with natural surroundings. But my experience now is very much the same as it was in childhood, leaving me with a feeling of happiness and calm inspired by nature, fresh air and the freedom of open space.

Very often as I'm wandering through a park admiring wildflower meadows, tree lined walks and watching the quiet hubbub of wildlife going about its business, I'm reminded of a quote from double Nobel Prize winner Marie Curie: "All my life through, the new sights of nature made me rejoice like a child". I look up to the sky and think of my Nan and say a silent 'thank you' as I reflect on those wonderful days we spent together at the park.

Favourite childhood park: Peckham Rye Park, London, the place I speak about above. I must go back and recall some old memories.

Favourite local park: I love to stroll around Pierremont Park in Broadstairs which was formerly the gardens to Pierremont House where Queen Victoria visited as a child. It's in the heart of the town and seeing it come to life in springtime always energises me and enthuses thoughts that summer is not too far away.

Favourite overseas park: My family used to holiday in the Republic of Ireland every year and I fell in love with Muckross Gardens in Killarney National Park. Nestled alongside Killarney's lakes with stunning gardens and mountainous views, it possibly the most relaxing place I've ever visited.

Favourite park memory: Has to be trips to the park with my Nan. She was the kindest person and made sure that each visit was fun but also taught me something new about nature.

Favourite thing to do at the park: I used to love playing football after school; nowadays it's a much gentler form of exercise walking with my retired greyhound. I keep telling myself I'll take up parkrun; it will happen someday...

Terry Housden is Fields in Trust Development Manager for the South of England and Northern Ireland. He can be contacted by any of the below means.

Terry Housden is Fields in Trust’s Development Manager for the South of England and Northern Ireland, providing support and advice for more than 500 sites in his region. He continues to work with landowners and other stakeholders to secure protection for more outdoor spaces as well as leading on partnerships and liaison with sports governing bodies and sports councils at county and national level including The FA and Sport Northern Ireland. Terry previously spent twelve years working in sports regulation which followed three years working for a commercial sports organisation.