PROTECT: 80 years on from the first King George’s Field 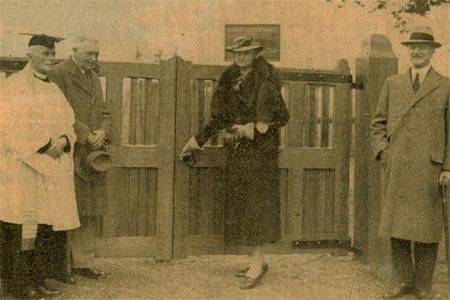 Today, 16th July, marks the 80th anniversary of the legal protection of King George V Playing Field in Sonning, Berkshire, identified as "the first field" of the 471 contained within the Final Report of the King George's Fields Foundation.

The King George's Fields Foundation, chaired by Clement Atlee until he became Prime Minister in 1945, was established in November 1936 following the death of His Majesty King George V earlier that year. The late King had been the first President of the National Playing Fields Association (NPFA) from its founding in 1925 and incorporated it by Royal Charter in 1932.

The King George's Fields Foundation was initially separate from the NPFA but worked closely with it as the recognised authority on all playing field matters. The Foundation was established in response to the increasing urbanisation and concern that the lack of open spaces would restrict the rising generation physically. The aim of the Foundation was "to promote and assist in the establishment... of playing fields for the use and enjoyment of the people". Grants would be provided to aid the establishment of playing fields across the UK, with each to be styled "King George's Field" and be provided a pair of heraldic panels or other such signage commemorative of His Late Majesty.

Between the opening of the scheme in March 1937 and the outbreak of World War II in September 1939 a total of 1,800 preliminary applications were received of which 462 were approved by the Foundation. On 20th October 1937 a cheque for £500 was provided to Sonning Parish Council towards the purchase of around nine acres of land to establish a King George's Field in the town. A further £1,800 was provided by the Parish Meeting and the Department of Health towards laying out of the field.

Once completed the new playing field was formally opened by Mrs Maud, wife of General P Maud, the chairman of the layout committee of the NPFA. General Maud was quoted in the Times saying that "only one village in ten had a playing field, despite the number of meadows around them". He went on to state that "children had nowhere to play except in the streets, which were becoming increasingly dangerous".

Despite 462 schemes having been approved by the Foundation by the outbreak of war in 1939, much of the work on the new playing fields ceased during the conflict and the changed circumstances in 1945 meant a number of the schemes were abandoned. Alternative schemes were approved in a number of cases with all completed by the 1960s when the Foundation was dissolved, and responsibility passed to the NPFA. By this time 471 spaces across the UK had been established and grants in excess of £600,000 had been distributed with total capital costs to all bodies concerned of over £4 million.

Of the completed schemes all but 19 were in receipt of grant aid from the Foundation. Whilst the Foundation was not authorised to spend funds abroad the style "King George's Field" was nevertheless accorded to sites in Barbados, the Falkland Islands, Malta, Nigeria and Yemen (then known as Aden). The distinctive lion and unicorn emblems of the Foundation can still be seen today atop the grand gates to King George V Recreation Grounds in Floriana, Malta.

In 2015 Fields in Trust celebrated its 90th Anniversary with a cricket match at King George's Field in Sonning against the Lord's Taverners. Ambassadors Graeme Le Saux, Pet Nevin and Non Evans MBE all lined up as part of the Fields in Trust team which won by four wickets.

Eight decades on from the protection of the first King George's Field, these spaces remain at the heart of their communities as a fitting memorial to the King. Today they form part of the 2,735 parks and green spaces protected with Fields in Trust across the UK. The charity's work is as important today as it was back then ensuring spaces where people can stay physically and mentally well; places where we can all move, breathe, run and play. Parks and green spaces are an important tool to drive social cohesion, combat loneliness and build community spirit. They are good, they do good and they need to be protected for good.

Find out more about:

Our History: We are proud of our long history protecting parks and green spaces

Our Strategy: Green Spaces for Good isn’t just the name of our strategy, it is the essence of what we do and why we do it

Protection: Fields in Trust protects parks and green spaces in perpetuity across the UK

If you are interested in finding out more about this process or our rationale, please contact our Chief Executive, Helen Griffiths, on helen.griffiths@fieldsintrust.org.