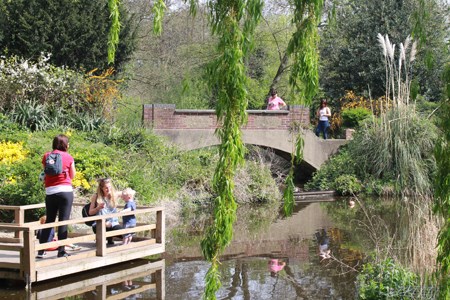 This month, July 2019, marks 100 years since The Admiral of The Fleet, the Hon Sir Hedworth Meux officially signed the paperwork to donate Cedars Park to the people of Waltham Cross, Hertfordshire.

This hundred years of history would be remarkable for most of the UK's parks and green spaces, but for Cedars Park it is but one small step on a long and significant history of the park which, in its former incarnation as Theobalds House, has been the site of several defining moments of British history.

The recorded history of the park can be traced to 1140 with the first reference to Theobalds or Tybalds House. It came to prominence during the Tudor era when the estate was purchased by William Cecil, the first Baron Burghley who was Secretary of State to Elizabeth I.

William Cecil built a grand house on the site and created a royal apartment for Queen Elizabeth who is recorded as visiting Theobalds at least 15 times during her reign. He also laid out extensive gardens based on the Château de Fontainebleau, south east of Paris. A contemporary survey reveals: "The gardens at Theobalds were large, and ornamented with labyrinths, canals, fruit trees and fountains. The great garden contained seven acres of ground; besides which there was the pheasant garden, privy garden, and laundry garden".

After the death of Queen Elizabeth, the royal connections continued, her son, King James VI of Scotland became King James I of England and Ireland on the "Union of the Crowns" in 1603. He stayed at Theobalds whilst travelling from Scotland to London for his investiture and he was a regular visitor in subsequent years. Theobalds was by then owned by Robert Cecil, son of William. Cecil was a staunch supporter of the new King and his loyalty was rewarded with a series of promotions until Cecil was almost singlehandedly running the affairs of state as Lord Treasurer. Although disputes between historians continue, Robert Cecil has been identified as having a significant role in discovering the Gunpowder Plot and preventing the death of the King.

As a frequent visitor to Theobalds, King James fell in love with the house and estate and persuaded Robert Cecil to exchange Theobalds for the nearby Hatfield. It was at this point when Theobalds was extensively developed as a Royal Palace. The grounds and parkland were transformed at this time under the guidance of head gardener Mountain Jennings. Because James was interested in developing a silk industry in England to rival the French, mulberry trees were planted at Theobalds. Gardener Jennings is depicted on one of seven ceramic plaques by renowned ceramicist Phillipa Threlfall which tell the history of the park. During this period it was the scene of many state occasions including the performance of plays by Shakespeare's contemporary Ben Jonson.

It was at Theobalds James I died at the age of 57 in 1625. He was succeeded by his only surviving son, Charles, then 24-years-old, who was proclaimed as king at the gates of the Theobalds Estate. King Charles lived through a turbulent period of history and was at Theobalds when a petition from both houses of parliament was presented to him, in February 1642. He left from here immediately afterwards to put himself at the head of his army in Nottingham - effectively beginning the English Civil War.

After the victory of Parliamentary forces under the leadership of Oliver Cromwell, the decision was made to tear down several Royal palaces, including the house at Theobalds which was taken apart from 1625. It was more than 100 years later when the name Cedars became associated with the site, a mansion house and hotel was built taking its name from the trees within the estate. By the early 1800s the estate had come into the possession of the Meux family.

Lady Valerie, wife of Sir Henry Meux, is reported to be have persuaded her husband to purchase Christopher Wren's Temple Bar from the City of London, and to bring it to their Hertfordshire estate to be erected stone by stone in the grounds. The building remained in place until the 1990s when it was returned to the city where it can be seen in Paternoster Square alongside the London Stock Exchange.

Preserving and interpreting the long and varied history of Cedars Park was the purpose of a significant National Lottery Heritage Fund and Big Lottery Fund grant awarded in 2011 to Broxbourne Borough Council. The £1.89 million funding was to protect and improve the infrastructure within the park, and to promote its heritage value with the local community. A condition of the funding was to ensure community support for the project by engaging volunteers in the heritage aspects of the park. Soon after the lottery grant was secured the landowner, Broxbourne Borough Council, signed a Deed of Dedication with Fields in Trust to secure the space for public recreation in perpetuity. Cedars Park was protected as part of the Queen Elizabeth II Fields Challenge, several hundred years after the first Queen Elizabeth had been a regular visitor to the space.

Now Cedars Park is co-managed by Broxbourne Borough Council and the volunteer Friends of Cedars Park for the benefit of the local community. As a group, the Friends have developed many projects to ensure Cedars Park remains a hub for the local community. For example, their monthly 'Cuppa Club' invites elderly members of our local community in for tea and biscuits and a chat with neighbours. Regular 'Green Therapy' activities support people living with depression and anxiety who spend time in the beauty and natural environment of the park while at the same time contributing to the parks maintenance and upkeep.

Far from resting on their historical laurels the Friends of Cedars Park are engaged every year with the Enfield Archaeological Society annual community archaeology festival and have uncovered several artefacts from Cedars Park's rich history. The Friends have recently introduced the Cedars Park forum where park users can continue to add to the ongoing history and share their memories of Cedars Park online. The Friends are also keen to engage current and future generations of park users as volunteers through their participation in the Future Proof Parks programme.