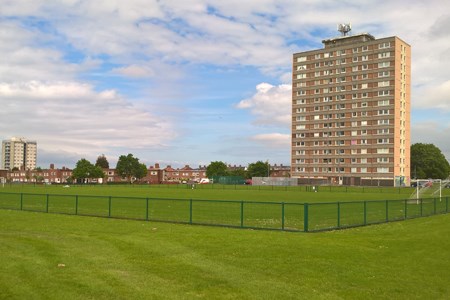 Young people playing sport often think themselves into the role of their heroes - imagining themselves alongside Greg Laidlaw at Murrayfield, Gareth Bale at the Bernabéu or Ellen White at Wembley. For a generation growing up in 1950s Belfast the nearest patch of green space was the next best thing to playing at Windsor Park stadium.

One young man would regularly leave his terraced house on Burren Way, east Belfast and run around the corner to kick a ball with his friends on Creagah Green. He would spend hour after hour honing his skills on the local pitch until, one day he was spotted by a professional scout. Bob Bishop, Manchester United's chief scout for Northern Ireland immediately sent a telegram to United's manager Matt Busby saying: "I think I've found you a genius". The genius was, of course, George Best and today an image of Best in a 20-foot-high mural looks down across the green where he began his sporting journey.

Cregagh Green is an iconic space, now protected in perpetuity through a legal Deed of Dedication between Belfast City Council and Fields in Trust. It was the first green space to be protected as part of the Active Spaces programme. Delivered by Fields in Trust and funded by the London Marathon Charitable Trust, Active Spaces protection promotes physical activity and community participation in targeted areas. It was an appropriate space for the Active Spaces programme to launch because of its location and its history. Cregagh Green is in a part of east Belfast identified by the Northern Ireland Assembly as having lower health conditions than the Northern Ireland average with the fourth lowest male life expectancy and the fourth highest age-standardised mortality rate due to respiratory disease when compared with other wards.

Consultations with the Cregagh Community Association identified a need to encourage more physical activity amongst local residents - both for the health and wellbeing benefits that this delivers and the community engagement it supports.

The Active Spaces programme launched with a community day in August 2017 featuring sporting taster sessions. Over 150 people attended the event and took part in new activities. For younger people, this was an introduction to things they have never tried and for the parents and grandparents, it reconnected them with sports from their own youth.

Once established, the Creagah Green Active Spaces activities included "Danderball". This is an intergenerational, walking-football game designed, not only to encourage engage older and retired men to become more active but also to provide an opportunity to bridge the gap between the young and older generations, fostering broader community relations. Senior citizens participated in skills sessions and five-a-side walking football games each week over a nine-week course alongside boys and girls from local schools.

Community consultation also identified a local interest in more physical activities and fitness sessions to benefit women in the wider community. A taster session of women's boxing-based exercise and a fitness boot camp attracted a core group of participants and they maintained continued interest over a 12-week programme.

The Active Spaces programme launched with a community day in August 2017 featuring sporting taster sessions. Over 150 people attended the event and took part in new activities. For younger people this was an introduction to things they have never tried and for the parents and grandparents, it reconnected them with sports from their own youth. 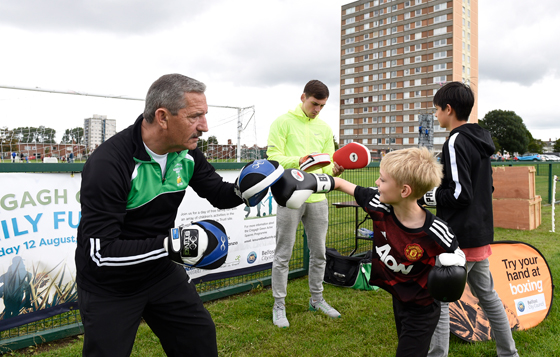 Like many sports clubs however, the changes were not all physical. Social media and WhatsApp groups were created to help build and maintain enthusiasm through regular communications and updates. Once established these connections made it easier to develop and maintain newly formed friendships with fellow participants. New connections have helped to impact positively on feelings of wellbeing and mental as well as physical health.

At the end of the organised programme funded by Active Spaces, attendees were keen to continue and now sustain the activities on a pay-as-you-go basis, coordinated by Community Association volunteers. The programme has proven to be very popular and the success has led to the appointment of a new coach to continue the programme throughout summer 2019.

The prolonged and ongoing success of the programme on Creagagh Green has delivered the aspirations set out at the beginning. Speaking at the Active Spaces launch, Councillor Adam Newton of Belfast City Council's People and Communities Committee said: "We've committed in our Belfast Agenda to making sure that everyone in Belfast experiences good health and wellbeing and will be able to enjoy its parks and public spaces, so we're delighted to have secured this protection.

"It means that this valuable green space which has a unique association with one of our most famous sons, George Best, will be safeguarded and that we can encourage more local people to follow in his footsteps and get active in Cregagh Green.

"Getting active in green spaces can have such a positive impact on our physical and mental wellbeing. What's even better is that it's free to get out and explore your local park or green space".

With such a strong sporting history Cregagh Green has been sought out for other symbolic connections. It is now officially twinned with Flanders Peace Field in Belgium, the site of the Christmas truce football match when Allied troops and German forces came together during a pause in the fighting at Christmas 1914. One of the local school pupils who took part in a children's match on the "peace pitch" is aware of the local sporting history, she said: "I would love to be able to play like George Best. What he did was amazing, coming from this community to become one of the best players in the world".

Best's sporting journey continues to inspire future generations and now they can be secure that there will always be somewhere for play sport and recreation on the protected site of Creagah Green. Fields in Trust Development manager for Northern Ireland, Terry Housden, reflects on the continuing role of Cregagh Green he said: "Local parks and green spaces are vital for people engaging in sport of all sorts, yet they are not a statutory requirement and can be lost to development. Sports stars such as east Belfast's George Best, one of the greatest ever footballers, don't launch straight into professional football. He spent hour-upon-hour learning his trade on the turf of Cregagh Green. This demonstrates the importance of providing local people with an opportunity to get active and enjoy the benefits that green spaces offer".

Whether a sporting journey begins as a child and progresses to a career as an elite athlete, or an adult revisiting youthful sport for fun, access to a local park or green space is a vital starting point.