FRIENDS OF GROUPS: Spotlight on Friends of Newton Park 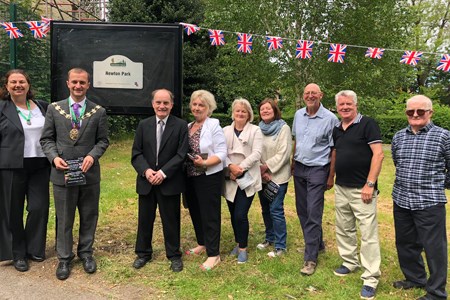 Newton Park in Trafford, Greater Manchester occupies land that used to be the grounds of, Watling Gate the residence of the Newton family. Originally the family estate extended to around 25 acres, but during the 1920s parts of the estate were sold for residential development, with only the house, and a reduced area of land surrounding it, being retained by the family. On his death in 1937, Lieutenant Colonel CE Newton, the last male of the family line, bequeathed the house and land to the newly-created Altrincham Borough Council.

His will said: "I declare that the Council shall hold the said plots of land hereinbefore given to the Council upon trust for the perpetual use thereof by the public for the purposes of a park or pleasure grounds and for the purpose of exercise and recreation".

In line with these wishes of Lt Col Newton the grounds were developed for public use and named Newton Park in memory of the benefactor. The Council converted the house into a public art gallery and museum. What remains of the original estate forms a distinctive T-shaped plot bordered by residential roads and the Sinderland Brook.

The park served generations of local residents for their exercise and recreation just as Lt Col Newton had intended. His former house went through many uses, finally as a nursery school. However, like many other parks in the early years of this century, pressure on local authority resources meant the park was beginning to look a little unloved and Watling Gate house, fell into decline.

Local people concerned at the falling maintenance standards and dereliction decided to get together and discuss what they could do themselves. So, on a cold, dark January evening in 2003, the Friends of Newton Park held their first committee meeting. Dave Eatock who has been involved with the Friends of Newton Park from the outset takes up the story: "At the time there were other Friends groups setting-up in Trafford and, as Newton Park is a relatively small park and comparatively under-resourced, there was an incentive for us to form a group and fight our corner". Together with a growing movement of many other groups across the UK local residents stepped up to fill in the gaps and to care for their treasured local park. The Friends of Newton Park was formed, and their work continues today. As a local project, they have successfully obtained grants for physical developments like picnic benches, and also a programme of activities and community events such as an Easter Egg Hunt. This small group of volunteers, with no paid employees, are very much appreciated by the local community. Volunteer Friends of groups can access funding pots which are not available to the local council and the Friends of Newton Park have sought support from a very wide range of sources to help improve their park.

Basic maintenance of the park is carried a contractor appointed by the landowner, Trafford Council, and the role is limited to grass cutting and contracted services, all the other gardening and additional work is carried out by volunteers at fortnightly gardening club meetings.

One of the early successes of the Friends of group was the replacement of some outdated children's play equipment funded by Section 106 monies (awarded to mitigate the impact of local development by supporting community and infrastructure projects). The Friends took a role in helping design the new set up and ensuring it was appropriate for the site and the young people who use it. As Dave says, "although the equipment is made of timber it has stood the test of time and is still used today".

As local residents and regular park users the Friends of group were clear about the positive changes that they wanted to see in Newton Park and over the years they have made many improvements to the local green space. Recent developments have focussed on enhancing community health and wellbeing, walking football, Tai Chi classes and an outdoor gym. As well as installing this new equipment the Friends organised fitness sessions to introduce locals to the best way to use the equipment.

A portion of the site was set aside for wildflower planting which involved lots of local schoolchildren planting seeds. One funding bid by the group created a butterfly garden in a quiet area of Newton Park. Whilst usually a peaceful and tranquil area the butterfly garden comes alive for the duration of educational visits by local schools. The garden is also enjoyed by a group of people with disabilities who come and help out with the planting. Whilst the care of the garden and purchase of the plants is the work of Friends of Newton Park volunteers, visitors are invited to take seeds or cuttings for their own gardens, and herbs and fruit when in season.

Newton Park and Watling Hall have generated a significant in local history and in particular the life and legacy of Lieutenant-Colonel Charles Edward Newton (1859-1937) who bequeathed the park to local people in 1937. The anniversary of World War I has reinvigorated interest in Newton's military history. In 1900 he was a founding member of the East Lancashire Royal Engineers (Territorials) and remained with them for over twenty-years including the period in 1914 when war was declared. At the outbreak of the war, he was commanding the East Lancashire Royal Engineers. He established his billeted men at their Headquarters in Old Trafford, engaged both in their training and in the heavy recruitment programme for the new volunteers joining the war effort. His men became part of the 42nd East Lancashire Division (Territorials), the very first Territorials to leave Britain for foreign service.

An extensive study of Newton was undertaken by local historian Charlotte Starkey who created materials to displayed in the park revealing its history. An interest in the World War I connection resulted in a suggestion from a local resident that the park might be suitable for consideration as a Centenary Field - Fields in Trust's programme to protect parks and green spaces forever to honour the memory of the millions of men and women who lost their lives in the Great War. The idea was supported by the Friends of Newton Park and in response, the landowner, Trafford Council applied to Fields in Trust for the selected area of the park to be dedicated. Dave reflects on the relationship with the local Council, saying: "Trafford Council have always respected the fact that Friends of groups are contributing positively to the upkeep and maintenance of the parks and the relationship has been enhanced in recent months".

Once legal processes had been completed a Deed of Dedication was signed between Trafford Council and Fields in Trust, protecting the park for community use in perpetuity. A formal dedication event in May, involved all sections of the of the community including games and activities for children. A Centenary Fields plaque was unveiled by Trafford's Mayor, Cllr. Rob Chilton.

Dave considers the recent event held to commemorative event: "If that was a reflection of how people view the park and the work done by the Friends, it was a very, very positive thing for us as volunteers because there were a lot of people who, don't get involved, yet nevertheless were pleased to have an opportunity to express their gratitude for all the work that is done... it's very encouraging".

The Friends of Newton Park have played a great part in caring for this community park over many years. Now, with its dedication as a Centenary Field, in partnership with Trafford Council, they have honoured the World War I generation - of whom Lt Col Newton was a key figure and ensured that the park is protected for future generations for "exercise and recreation" as Newton had intended.

As Dave says of the Friends of Newton Park: "All our achievements have been made as a result of the hard work of a dedicated group of local volunteers who are determined not to allow cutbacks in funding to spoil our park".

You can find out more about the Friends of Newton Park in their Facebook group.