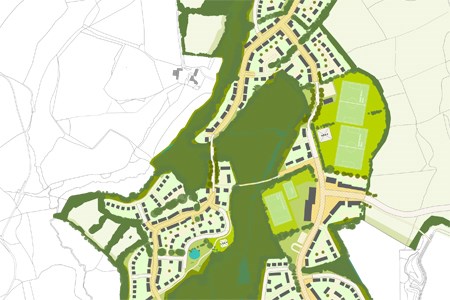 Any discussion on the topic of planning is likely to conjure up images of bulldozers, roads and construction rather than green spaces, which are far too often lost when new development takes place. But of course, the parks and green spaces that make our towns and cities liveable have to be planned, alongside the buildings. In this article we shine the spotlight on an example in south Wales to examine the planning tools and legislation and consider how they can be applied to ensure new developments have sufficient parks and green spaces.

The City and County of Swansea, on the south west coast of Wales is the second most populated area in Wales behind Cardiff. Currently approaching half a million residents, it is set to grow between now and 2025. Last February the Swansea Local Development Plan (LDP) was approved which aims to develop around 17,000 new homes and create more than 14,000 new jobs. This is an ambitious, forward-looking plan with a growing population and thriving business at the heart of it.

The detailed Local Development Plan has emerged after several years of extensive public consultation and feedback from specialist agencies and statutory consultees. Overall, six mixed-use, strategic sites have been identified in the Swansea LDP. One significant part of the plan is the creation of a new urban village at Pentre Felindre to the north of Swansea. The land is owned by the Welsh Government (134 hectares) and Swansea City Council (56 hectares) - formerly a tinplate works. This new community will consist of three linked developments built around existing woodland and greenery, adjacent to an existing business park and include around 800 new homes.

The vision for Pentre Felindre is "to create a vibrant and sustainable new village with a strong sense of community, where people will choose to live, work and spend their leisure time, and which will complement the plans for the adjoining strategic employment site". A masterplan for the new village has been produced by the Welsh Government including proposals for a total of 800 homes which are designed to be highly energy efficient and produced in a mix of sizes, 20% of which would be affordable housing.

When major new infrastructure is developed as an integrated project a "place-making" approach can be adopted, with a view on how a community will occupy a newly developed area: this involves planning, design and management with input from elected officials, community groups, residents and businesses in an attempt to improve the economic, social and environmental situation of the area in question.

Crucially the planning for the new homes at Pentre Felindre includes all the facilities and community infrastructure that a new village would need, including a primary school, village hall, cycle paths, a GP surgery and shops. Pentre Felindre has been planned in three discrete but complementary development areas, named Caeau Tredegar, Bryn-coed and Bryngolau. Whilst the new development was created on a former industrial "brownfield" land, many adjacent mature trees and hedgerows will be retained and each area will have its own public open space. Each area has been designed to be accessible through a network of pedestrian and cycle routes, encouraging active travel, and every home will be within 400 metres of a bus stop connecting to a circulatory bus route.

Guidance for Outdoor Sport and Play

The village will also include new playing pitches, with changing accommodation, and new children's play areas. These facilities have been planned with reference to Fields in Trust's Guidance for Outdoor Sport and Play and include more than the minimum recommended standard of green space per head of population. Fields in Trust has issued guidance for the planning and design of outdoor play and recreation facilities since 1927. Historically known as the 'Six Acre Standard', our Guidance was most recently updated in 2015 and has long been acknowledged as the primary source of outdoor space provision by national and local government, as well as play practitioners. Versions of our Guidance for Outdoor Sport and Play for England, Scotland and Wales reflect the specific planning landscape of each home nation and a Welsh language edition is also available.

In Wales planning is a devolved responsibility and planning legislation and guidance has been applied as part of wider policy ambitions - as Lesley Griffith AM (Cabinet Secretary for Energy, Planning and Rural Affairs) says in her introduction, the latest policy "will help to ensure that the planning decisions taken in Wales, no matter how big, or how small, are going to improve the lives of both our current and future generations. It will support changing the way we live and work, and the buildings and environment of Wales, today, building a better environment to accommodate current and future needs".

A place-making approach was reconfirmed in the latest planning guidelines from the Welsh Government. Edition 10 of Planning Policy Wales also includes a reference to Fields in Trust's Guidance for Outdoor Sport and Play which recommends minimum standards for public provision of parks and green spaces. This revision follows a commitment to restructure planning policy in line with the Well-being of Future Generations (Wales) Act 2015. Fields in Trust contributed to the preparation of the document including collaboration with other organisations and are delighted to see that our guidance has been referenced as a useful tool for local authorities in the provision of open space.

Fields in Trust's Guidance has been widely used and adopted in Wales for many years and this reference in Planning Policy Wales will support its ongoing use. However, there are many other policies which have contributed to the provision, protection and improvement of parks and green spaces in Wales. At Fields in Trust we have been campaigning and lobbying for many years to protect, support and champion parks and green spaces in the country and some notable policy and legislation which Fields in Trust has contributed to, and supported, include the following:

Planning on the scale of the new Pentre Felindre urban village can be transformational, but to be effective needs a clear, central masterplan and a mandate to significantly alter or create new infrastructure for a community. However, these opportunities are rare; most frequently planning regulations take account of areas with existing communities and already established physical and social infrastructure including parks and green spaces.

The concept of "place-keeping" has been coined by academics studying regeneration. This refers to long-term management ensuring that that the social, environmental and economic quality and benefits of a place can be enjoyed by future generations. Place-keeping relates to what happens after high-quality places have been created and means maintaining and enhancing the facilities in an area - Fields in Trust protection of parks and green spaces can contribute to this approach.

We know from our Revaluing Parks and Green Spaces research that new recreational spaces planned for Pentre Felindre will help contribute to the health and wellbeing of the community that will be established there and the parks and green spaces will increase the amount of publicly accessible green space, currently 37.78 square metres per head of population in Wales according to our Green Space Index.

Fields in Trust applauds the Welsh Government and the City and County of Swansea, who have eleven spaces protected with Fields in Trust, as they clearly recognise through various legislation and policy the important role of parks and green spaces to our wellbeing and the environment and have implemented plans to create a new urban village at Pentre Felindre based on these principles.