BOOK SHELF: Travis Elborough's A Walk in the Park 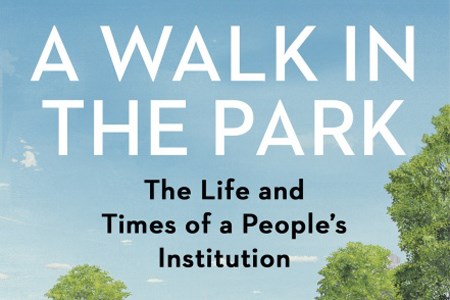 Travis Elborough's 'A Walk in the Park' provides a vibrant, loving history of our nation's parks and green spaces. Here we publish the introduction to Travis's book, copies of which are available to purchase online.

The Swiss author Robert Walser once argued that it always feels like a Sunday in a park. Like Sundays, parks certainly occupy a unique temporal zone. For their visitors at least, they seem at one remove from workaday life. Time within them can be wasted, parks supplying the ideal location when we've nothing else to do. Or desperately want to do nothing in particular, and as languorously as possible. And yet they are also hives of activity - albeit of a leisurely, if athletic, kind.

When Walser spoke of Sundays, though, it was because, for him, these public spaces were imbued with the same melancholy as the interminable Sundays you only ever experience as a small child. Perhaps Walser's melancholy is unique, but the park, for many of us, is surely infused with childhood memories: of lazy sun-dappled afternoons, of swings and roundabouts, and mud-stained knees on the local playing fields, the aroma of freshly mown grass and the cloying scent of brightly coloured geraniums. Nearly all of us first encounter parks as small children. And, in due course, take our own children to parks. So maybe some of us do share Walser's melancholy - perhaps these spaces remind us of lost innocence and the passing of the years.

When it comes to space rather than time, the limits of the majority of public parks remain clearly demarcated by fences and gates. Such barriers are seemingly there to protect the park from the noise and mess of the town or city. Or vice versa, with the metropolis quite possibly fearing contamination from too much exposure to plants and grass, much like a small child forever nudging uneaten vegetables to the edge of their dinner plate. But these barriers also create an aura of expectation, crowning the park as a precious destination in its own right, one that takes us out of the humdrum streets surrounding it, and out of ourselves. For grander public parks, there are postcards to send and collect, as if they were far-flung and exotic locations. To orientate ourselves in these places we consult their maps as eagerly as sailors, back in the day, staved off scurvy with sauerkraut and peered at the horizon with a sextant in hope of land. And like other newly discovered worlds, their founding principles were on occasion utopian, if, in retrospect, no less naive, misguided, presumptuous and plain wrong.

And this is a crucial point. Public parks were indeed 'founded', or - to escape the metaphor, and put it plainly - invented. General access to tended green spaces and the ability to enjoy them at relative leisure are comparatively modern and hard-fought developments, and the roots of even the humblest neighbourhood park or recreation ground lie in age-old battles over land and liberty. In Britain and much of the developed world, historically very little land was ever truly public. Under feudal systems, all land was essentially the property of the King, and access to it granted directly by the Crown or via feudal lords. 'Common law' in Britain meant that there were such things as commons, where the public might, for instance, graze cattle. But this space was not at all sacred, and was frequently enclosed by royalty and landlords for their private pleasure.

This trend continued right up until the opening decades of the nineteenth century, as British monarchs remained unstinting in snaffling previously accessible land and adding it to their store of greenery. Charles I, for instance, had blocked off several local footpaths and removed acres of parish grazing ground when he walled in Richmond Park in the 1630s. It was 1904 before the public got full access to the park again. And it was only the vigilance of Robert Walpole, Britain's de facto first Prime Minister, that prevented Queen Caroline from seizing the whole of St James's Park as her personal garden. While George IV's Regent's Park - which casually absorbed areas of smallholding farmland used to grow hay for London's horses - was developed as a money- making scheme for the Crown, with exclusive residential properties incorporated into what was a gated private park.

The creation of public parks wasn't a sudden thing. The first parks were private, and, more often than not, used as royal hunting grounds. But over time it became apparent to some enlightened souls that an unhappy, subjugated population would benefit from designated public green space. And so would their rulers. Indeed, many of the globe's most famous public parks were created in part to quell political unrest and prevent revolutions. Parks are, of course, tamed wildernesses. And as the world became farmed and then industrialised and consequently less wild, ecologically speaking, parks were widely deployed as tools to tame supposed wildness among the population, ease alienation and see off social discord.

But cultivated wildness can unexpectedly cultivate wildness, and much as rebellious peasants had once conspired to steal game from royal preserves, so disaffected urbanites would consistently use the park as a place to gather to misbehave, often disgracefully, and forcefully challenge authority.

Parks are full of such fascinating contradictions: authoritarian yet liberating, public and communal yet private and solitary. A Walk in The Park aims to pick its way through them, exploring the park's place in history and parks as places where history has so often happened. It explores both the lives of the people who created landscapes that really have changed lives and the ordinary people who have used them.

But our cosy familiarity with public parks should not blind us to their increasing vulnerability in many countries around the world, and here in the UK too, for that matter. In a period when global economic conditions mean local authority budgets are being cut by central government, the upkeep and management of public parks is becoming ever harder to accomplish. Relief and support is being offered through outsourcing and private partnership, which, when it comes to a truly public resource, can be dangerous territory. In a world where almost anything, seemingly, can be converted into luxury flats, it's worth recalling that parks are a noticeable absence from the board game Monopoly (Though the world's largest permanent Monopoly board is to be found in a park in downtown San Jose, California). As a character in Don DeLillo's 1973 novel Great Jones Street presciently observed, 'the whole secret of corporate structures' is to tell 'the enemy you'll plant some trees'. Protests such as those in 2013 in Istanbul against plans to redevelop Gezi Park in Taksim Square into a private shopping mall - protests which were violently suppressed by Turkish government forces - may become more familiar sights.

So many snippets of our own histories are bound up in the hours we've whiled away in parks. Days, if not weeks, of my own life have been spent in them. As I'm a city dweller with no garden, they are where I normally go to escape the desk and work. For the past three years, that was impossible. The local park served as an office, laboratory, a rebuke to procrastination and a place to talk to people about parks, all rolled into one. The resulting book then is a user's history of sorts, one informed by the odd field trip and underscored by my foibles and preoccupations.

Like a walk in any park, it probably strays off an already winding path on occasions. There are, no doubt, one or two intermittent, or unexpected, pauses to survey a scene or take in the flowers, or watch a football game along the way. But hopefully its overall passage is no less diverting for that. Most parks are, after all, largely peripatetic places, and part of their beauty is that we usually take them in at our own pace.

Favourite childhood park: The very first park I ever knew was the Sompting Recreation ground, a decidedly modest expanse of playing fields in a village in Sussex where I grew up. Canopied by electricity pylons, it was the place we went - and were frequently sent - to go and play. And while a tennis ball would be hoofed about in a predicable enough Kevin Keegan fashion, and a turn taken on its swings and roundabouts, much of that play involved using the park as a launch pad for great flights from reality.

Favourite local park: My nearest and I suppose dearest park, remains Clissold Park in Stoke Newington, which celebrates its 130th birthday this year, and still stands as a symbol of the civic mindedness of our Victorian forebears while also being a welcoming space that meets the needs of the area's current community.

Favourite overseas park: There are so many but I have to confess to possessing a soft spot for Freshkills in Staten Island New York. It was once the city's main rubbish dump, receiving in the 1950s some 27,200 tonnes (30,000 tons) of trash every single day, but since 2001 has been remade and re-wilded into a park and nature reserve. Frederick Law Olmsted, co-designer of Central Park and one of the fathers of landscape architecture in America, was once a Staten Island resident and would surely have approved. On a smaller scale there's a similar dump turned park in Virginia, called Mount Trashmore, for obvious reasons, whose name alone makes it hard not to love too.

Favourite park memory: I have very fond memories of my time as the artist in residence at Victoria Park in Bow a few years ago, much of it knocking around with the members of its Model Steam Boat Club. Founded in 1904 it's the oldest continuous model steam boating club in the country and run by enthusiasts who race their pint-sized boats on a lake in a public park for the sheer love of it. I found their enthusiasm and commitment to their hobby deeply affecting, they seemed to embody amateurism in the truest and best sense of the word.

Favourite thing to do at the park: Strolling around and then simply sitting reading a book or newspaper, I am a man of no especially sudden moves, nor much by way of sporting prowess.

Travis Elborough has been a freelance writer, author and cultural commentator for nearly two decades now. His books include The Bus We Loved, a history of the Routemaster bus; The Long Player Goodbye, a hymn to vinyl records; Wish You Were Here, a survey of the British beside the seaside and London Bridge in America: The Tall Story of a Transatlantic Crossing and Atlas of the Unexpected: Haphazard Discoveries, Chance Places and Unimaginable Destinations, a collection of travel writing about far-off lands, obscure discoveries and unimaginable locations.

This extract is taken from "A Walk in the Park: The Life and Times of a People's Institution" which was published 2016 and described as 'a fascinating, informative, revelatory book' by William Boyd in The Guardian.